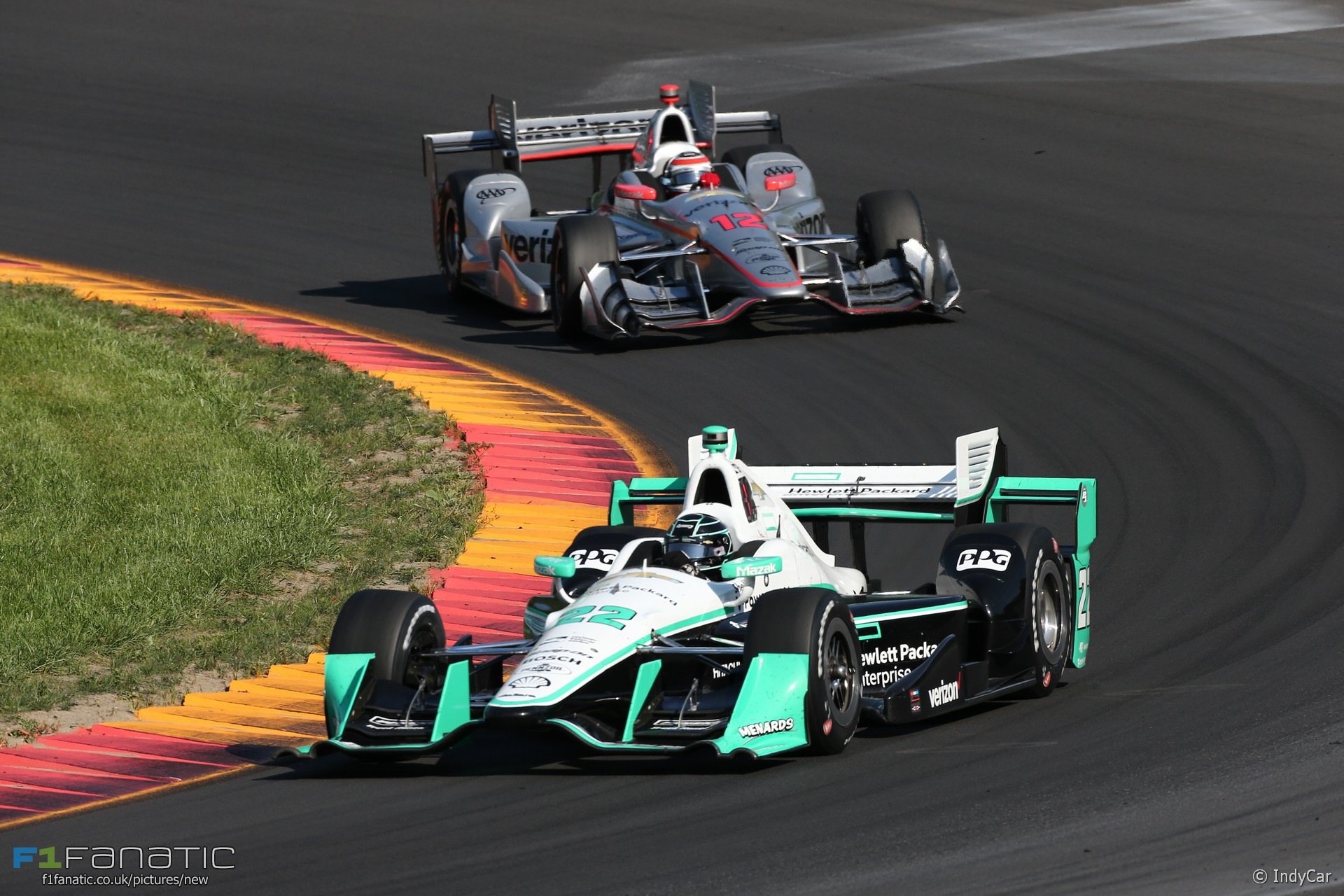 Only two drivers remain in contention for the IndyCar championship heading into the final race – but one may be unable to race in the finale following a crash at Watkins Glen yesterday.

And following Sunday’s World Touring Car Championship races in Japan that title could be decided by the widely-expected cancellation of the penultimate round of the season in Thailand.

Will Power was already on the back foot in his championship fight with Simon Pagenaud at Watkins Glen when he was tagged from behind by Charlie Kimball and made heavy contact with the barrier at turn four. Although he was released from the medical centre he has not yet been cleared to race in the season finale at Sonoma a week on Sunday.

Pagenaud, who brought his Penske home seventh, will automatically become champion if Power is unable to race at Sonoma. He left New York State 43 points ahead of Power with 104 available in the double points finale. Race winner Scott Dixon and Helio Castroneves, who took third, are 104 points behind and cannot beat Pagenaud on count-back of wins.

Dixon dominated proceedings at the Glen, scoring his fourth win in seven appearances at the track. He re-passed Castroneves at the final restart thanks to his Ganassi team mate Tony Kanaan slowing in front of the Penske driver before diving for the pits. Dixon then picked off the remaining cars and wove his usual fuel-sipping magic over the remainder of the stint.

None of his pursuers could get close to the blend of speed and fuel economy the reigning champion could manage. Josef Newgarden pushed late on to take second ahead of Castroneves, who had to make a splash-and-dash pit stop. James Hinchcliffe lost a podium finish when he ran out of fuel and Conor Daly slipped to fourth place ahead of Sebastien Bourdais.

A furious Power slated Kimball’s driving after the race but the Ganassi pilot did help him in one small way: he beat Pagenaud to sixth. But after missing the opening race of the season due to ‘concussion-like symptoms’ there is a real concern his season may end the same way and take his championship hopes along with it.

Mark Webber scored his first Formula One victory at the Nurburgring seven years ago after receiving a drive-through penalty. His victory in Mexico City on Saturday with Porsche team mate Brendon Hartly and Timo Bernhard came in similar circumstances, as the team were penalised for cutting the pit exit line.

The #1 Porsche had led from early in the second hour until the penalty following an aborted stop two hours later. This handed the lead to Audi’s Lucas di Grassi, Loic Duval and Oliver Jarvis. However during a mid-race rain shower a front left wheel bearing failed on the R18, sending Jarvis into the turn one barrier.

Marcel Fassler and Andre Lotterer brought their Audi home second as Benoit Treluyer sitting out the race due to injury. The Toyota of Stephane Sarrazin, Mike Conway and Kamui Kobayashi completed the podium.

Anthony Davidson was also absent due to injury leaving Sebastien Buemi and Kazuki Nakajima to do the work in Toyota’s number five car, though it went out in the second hour with a hybrid power unit problem.

Formula E-bound Jose Maria Lopez has provisionally won his third and final World Touring Car Championship title after finishing second in the main race at Motegi. He was on course for the victory but allowed team mate Yvan Muller through in the closing stages to hand his team mate his first win of the season, in a gesture of gratitude to Muller who allowed him to win at home in Argentina.

Norbert Michelisz took the victory in the opening reverse grid race (first video) ahead of Rob Huff and Tiago Monteiro to lead Honda’s first one-two-three, at their home round. Starting tenth, Lopez had to fight through the field, but was lucky to avoid unscathed when he shoved Nicky Catsburg wide on lap nine. Catsburg aggressively rejoined and hit Lopez, with both cars shedding carbon fibre but continuing.

Lopez scorched away at the start of the main race (second video) and was set for an easy victory until he allowed Muller through, but second was still enough to claim the title. Monteiro once again took the third step on the podium in a relatively static race.

Johan Kristoffersson claimed his first win of the season in France, as home favourite Sebastien Loeb made the podium in third. Andreas Bakkerud split the pair to close on the championship lead, which is now held by Petter Solberg – who finished fourth – five points ahead of Mattias Ekstrom, whose race was ruined in the semi-final when he picked up a puncture.

Round 25 of 36: Darlington Raceway

The penultimate race before the Chase for the Cup saw Kevin Harvick take victory at Darlington. Truex hit the front after Haas racer Kevin Harvick was twice delayed by slow pit stops.

Nico Rosberg won the Italian Grand Prix at Monza after jumping team mate Lewis Hamilton at the start following a poor getaway from the world champion. Hamilton recovered to second as Sebastian Vettel joined the Mercedes pair on the podium, much to the delight of the Tifosi.

Pierre Gasly looked set to extend his GP2 championship lead as he drew clear in the GP2 feature race until the Safety Car wrecked his advantage. Gasly was disadvantaged after the Medical Car was scrambled after Sergio Canamasas rolled his car following contact with Arthur Pic. That handed an opportunity to Antonio Giovinazzi – who started 21st having been excluded from qualifying – to win courtesy of a last-lap pass on Raffaele Marciello. Norman Nato won the sprint race from Gasly, while Giovinazzi completed the podium. With four races remaining Gasly holds a ten-point championship lead over Giovinazzi.

In GP3 championship leader Charles Leclerc also took pole, but was muscled down to fourth in the first race by British trio; Jake’s Dennis and Hughes, split by Jack Aitken. However sixth for Alexander Albon and eighth for Antonio Fuoco allowed Leclerc to extend his advantage. Race two was a different story however as he wiped out of contention by team mate Nirei Fukuzumi. McLaren junior Nyck de Vries went on to take his maiden win ahead of Albon and Fuoco, and Leclerc’s lead stands at 24 points with two rounds to go.

A thrilling Moto GP race at Silverstone produced another first-time winner – the fourth in the last five races – as Maverick Vinales triumphed. It was also the first for Suzuki since 2007. Cal Crutchlow followed up his maiden win last time out with pole at his home circuit and came home second, while Valentino Rossi completed the podium.

What did you make of the action this weekend. Or did you watch anything thrilling that we’ve missed? Let us know in the comments below.

Next weekend 2017 McLaren driver Stoffel Vandoorne returns to action in a Japanese Super Formula double-header at TI Aida. Lance Stroll, who is tipped to join Williams next year in place of Felipe Massa, will seek to extend his European F3 championship lead at the Nurburgring, where the category is supporting the DTM. Formula V8 3.5 will race at the Red Bull Ring and NASCAR drivers will have their last chance to enter the Chase for the Cup at Richmond.

there is Super Formula, Euro F3, , NASCAR and DTM.