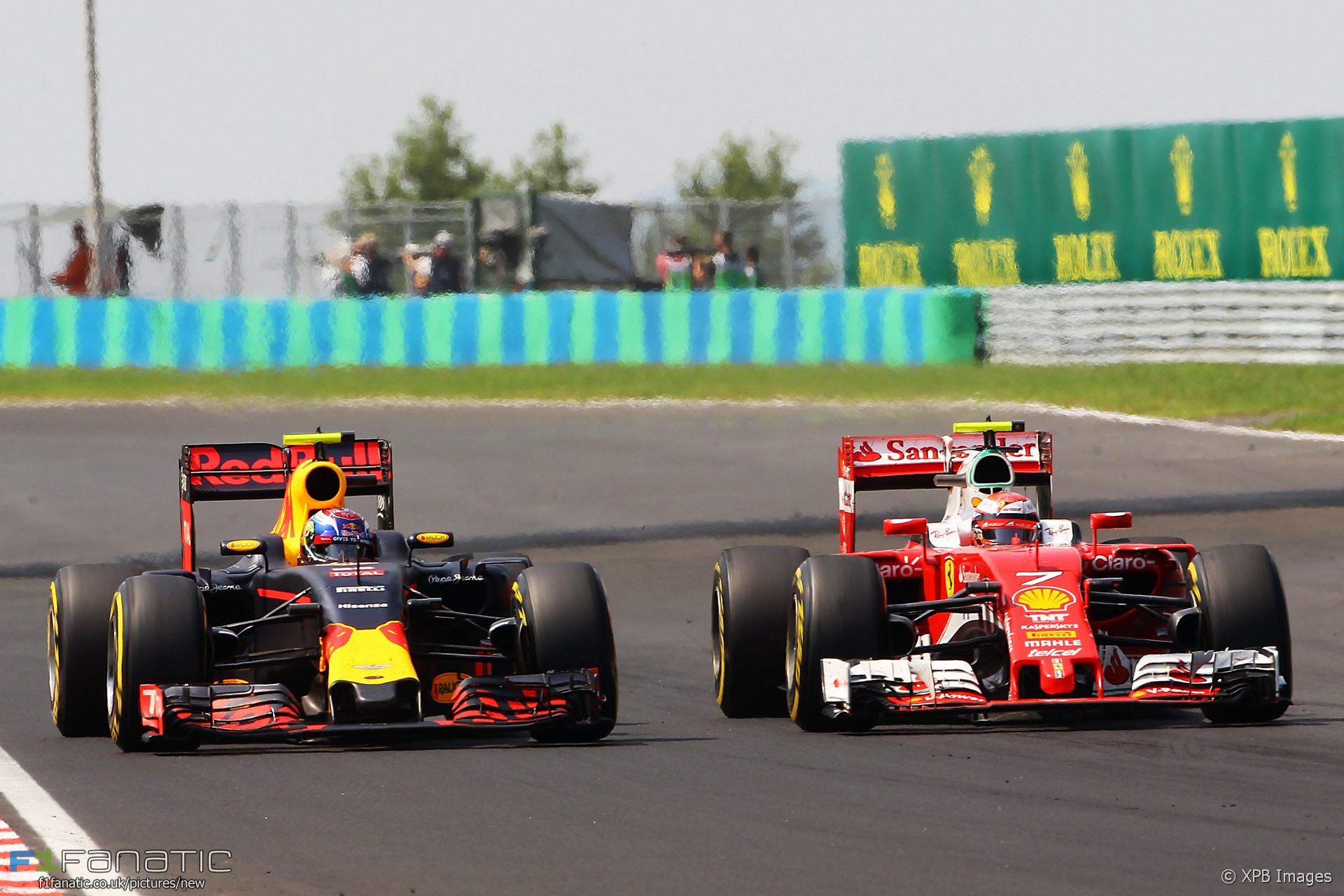 Kimi Raikkonen was voted as driver of the weekend for the Hungarian Grand Prix after eight-place climb to finish sixth.

He only received a score of two out of five in the driver ratings, but with 38% of your votes Raikkonen topped the poll for the first time since Bahrain last year.

Raikkonen’s weekend began to go awry in the rain-hit qualifying session. He made it through the very wet Q1 but as the track dried quickly in the second segment he was one of the first drivers to complete their final lap.

Although Raikkonen improved his time with his final effort it was beaten by 13 of the remaining 15 drivers on track before the chequered flag appeared.

However this did allow him the advantage of running the race entirely on brand new tyres, and he made the most of it. Impressive overtakes early in the race on Sergio Perez and Esteban Gutierrez helped him slice through the field.

However as in Spain he reached a roadblock in the form of Max Verstappen. Raikkonen lost part of his front wing as he tried without success to penetrate the Red Bull driver’s vigorous defences, and had to settle for sixth.

Raikkonen for me this time. Great fight from 14th grid position, should have finished right behind Seb. Poor qualifying, but more of a team error, not so much Kimi’s fault.
Dr Sven (@svend1)

I´m going with Raikkonen, because the qualifying result was not really his fault in my opinion.

And his race was stunning, especially his performance on the soft tyres.
Banana88x (@banana88x)

Staying that long behind a car with less power and much older and harder tyres is great work.

How he managed to keep his own tyres working all that time is fantastic.
sethje (@seth-space)

Raikkonen maybe if it was driver of the day – good strategy starting with softs long stint and then ultra aggressive with two sets of super softs.

But he can’t be driver of the weekend because of his poor qualifying. He should have been in the top six.
Arnoud van Houwelingen

Lewis Hamilton, Fernando Alonso and Daniel Ricciardo also picked up a solid number of votes after their strong drives. Carlos Sainz Jnr also received lots of plaudits in the comments – but missed the votes to match.

On the opposite end of the scale Jolyon Palmer picked up just two votes despite possibly his best race of the year where he nearly picked up his maiden points, only throwing them away late on with a spin. Nonetheless five drivers received less votes than Palmer, both Williams’, both Force India’s, and Palmer’s team mate Magnussen.

Despite his spin I decided to vote for Palmer. Solid qualifying and was ready for his first points. Shame he didn’t finish the race in tenth.
PorscheF1 (@xtwl)

As a Raikkonen fan, I really wanted to give him my vote.

Hamilton drove flawlessly this weekend especially when traffic would push him back within several tenths and then he’d immediately open up a 1.5-second gap.
Erik Olson (@eriko)

I don’t think any of the front-runners were overly impressive. Sure, the top four drove really well indeed, all on a very similar level.

But if I had to chose a driver who consistently performed strongly during the weekend, punching slightly above his car’s weight, I’d pick Alonso. His spin in qualifying and his warning for leaving the track in the race show how close he was to over-driving the car, but he kept it all together and achieved the best possible result in a tightly-packed midfield.
Nase

It has to be Sainz for me. Equalled his best qualifying of the year, and once again stuck his Toro Rosso in a really strong points position. He is simply making mincemeat of Kvyat.
Craig Woollard (@craig-o)

2016 Driver of the Weekend results