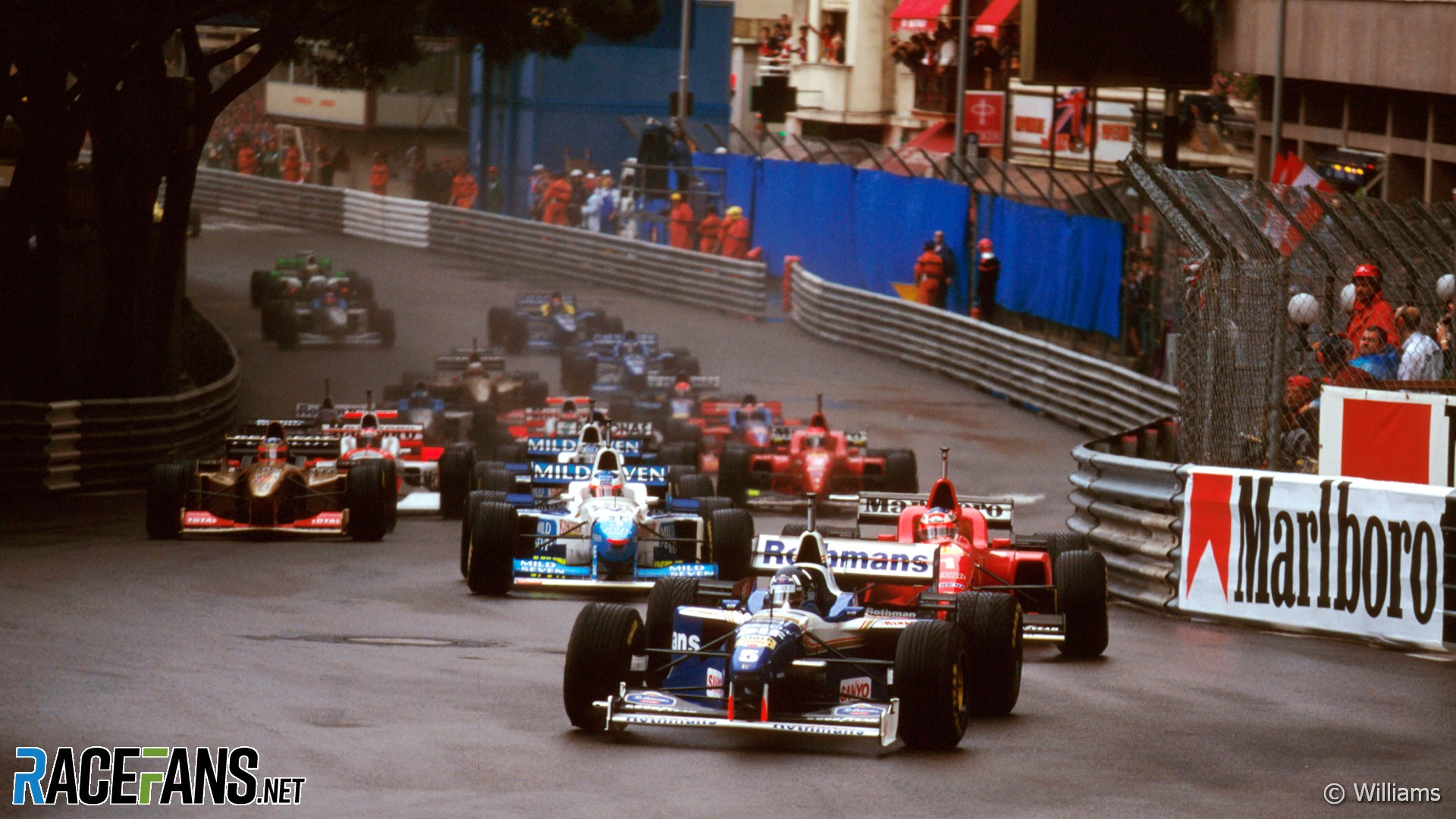 The chequered flag came out three laps earlier than planned at the end of the 1996 Monaco Grand Prix, held on this day 20 years ago.

And it was a good thing the race finished when it did, for with only three cars still lapping it was in danger of running out of competitors.

It was the craziest race the Principality had seen since Riccardo Patrese won in 1982 despite having arrived at Loews’ hairpin going backwards at one point. And the shocked winner was the man who had started 14th on the grid: Olivier Panis.

The Ligier driver did not figure highly among the potential winners when the 22-car field assembled for the sixth round of the championship. The dominant Williams-Renaults had won all five of the opening rounds, with four wins going to points leader Damon Hill and one to rookie Jacques Villeneuve.

The pre-race build-up therefore focussed on which of these two sons of Monaco Grand Prix winners would be the first to emulate their fathers by winning the race for themselves. The biggest threat was likely to come from reigning champion Michael Schumacher, who was looking for his first Ferrari victory in his sixth start for the team.

Monte-Carlo’s streets had been extensively resurfaced for the 54th running of the Monaco Grand Prix. The 1996 race was the last before a series of changes which relocated barriers and lessened the challenge of F1’s most cramped circuit.

Lap times fell by over a second and a half in qualifying. Hill, who had taken pole the year before, traded top times in the hour-long session with Schumacher. But with ten minutes to go, and feeling a pressing need to take advantage of a lull in the traffic to improve his position, the Williams driver posted his final time of 1’20.866.

That left Schumacher free to respond as he pleased in the final minutes. He did: a 1’20.356 gave Ferrari their second pole position of the season.

Schumacher’s former team Benetton filled row two, Jean Alesi ahead of Gerhard Berger. The latter was incensed after being delayed by Schumacher as the Ferrari driver waved to the chicane during qualifying.

The stewards investigated the incident, which led to Berger spinning at the corner, but took no action. McLaren team boss Ron Dennis accused Schumacher of holding up Mika Hakkinen, leaving his driver eighth on the grid.

That left David Coulthard to claim the highest qualifying position for McLaren’s specially-prepared short-wheelbase cars. He took fifth ahead of Rubens Barrichello’s Jordan and Schumacher’s team mate Eddie Irvine. The second Ferrari was using a new-specification rear end but Schumacher chose to continue with the tried-and-tested 1995 example.

Villeneuve, who had appeared in the Formula Three support event at Monaco three times before, could only manage tenth on the grid behind Heinz-Harald Frentzen’s Sauber. His prospects for victory seemed about as realistic as those of the man who started four places behind him.

As with practice and qualifying, the Sunday morning warm-up session was held in dry conditions. Panis, feeling comfortable with his JS43’s race set-up, headed the times.

Then the heavens opened. Under the rules at the time this meant an extra 15 minutes’ practice was hurriedly arrange to give drivers a chance to acclimatise.

Hakkinen crashed heavily at Tabac on the soaked surface, and with the race start just half an hour away he had no option but to switch to the spare car. This was not an option for Forti driver Andrea Montermini, who had to sit out the race after crashing his FG03 during the warm-up.

A comedy of errors

That left 21 cars to assemble on a very wet but drying track. And once the race began the field thinned out in a hurry.

From second on the grid Hill’s start was a beauty, leaving Schumacher no opportunity to move across to defend his lead. The Williams led a portion of the field up Massenet.

Villeneuve clung to the inside line at Sainte Devote, edging Hakkinen wide and leaving Jos Verstappen nowhere to go but the barrier. The Arrows driver perhaps rued his brave decision to start the race on slicks – no one would be in for those for 30 laps.

He was joined by Giancarlo Fisichella, who was given a helping hand by team mate Pedro Lamy. A furious Giancarlo Minardi therefore saw both his cars retire at the start of a race which could have proved highly lucrative for his team, which would end the season point-less.

The next visitor to the barrier was a shock: Schumacher clambered over the kerb on the right-hander after Loews and was spat into the barrier on the opposite side of the track. And he wasn’t the final victim of lap one: Barrichello, who’d already been hit from behind at Casino, spun into the barriers at Rascasse.

That left just 16 cars as lap two began. Hill already had a huge 4.3 seconds lead over Alesi who was followed by Berger, Irvine and Frentzen – the latter having made great gains from ninth on the grid. Ukyo Katayama was the next driver into the barriers on lap three due to a throttle problem on his Tyrrell. Ricardo Rosset brought Arrows’ participation to an end when he crashed on lap four.

And Pedro Diniz retired his Ligier with a gearbox fault after five laps. That left his team mate Panis with ten cars in front of him and just two behind as the field continued to tiptoe around the slowly-drying circuit.

Benetton’s hopes of a double podium finish ended when Berger appeared in the pits with faulty gearbox electrics. Ten laps into the race and just a dozen cars were still running, but from now on the rate of retirements returned to normal levels and some actual racing broke out.

Frentzen was almost falling over Irvine in his bid to take fourth place off the Ferrari, the pair fishtailing wildly from corner to corner. But on lap 17 impatience got the better of the Sauber driver, who wiped his front wing off against Irvine’s car at Sainte Devote. That send Frentzen into the pits for a new front wing and, with the track still too wet for slicks, another set of wet weather tyres. He immediately began setting fastest laps.

Hill put Frentzen a lap down on the 26th tour and the Sauber driver responded by pitting for a set of slicks. Hill did likewise the next time by and it proved a superbly-judged pit stop for the race leader. One Alesi came in two laps later Hill was comfortably back into the lead and any obstacles to his first Monaco Grand Prix victory appeared to have been removed.

But as Hill came past the pits on lap 40 he jabbed the radio button and told his team a red warning light had illuminated on his dashboard. The Renault engineers reported back that there didn’t seem to be a problem – but there was. A bolt in the oil pump had come loose allowing fluid to drain away and Hill, who had been almost half a minute ahead of Alesi, helplessly coasted to a stop at the harbour front chicane.

Alesi took over the lead ahead of Panis. The Ligier driver had made key gains by passing Hakkinen and Herbert then switching to slicks before Coulthard, jumping ahead of the McLaren driver in the process. His next target was Irvine who he barged past at Loews, leaving the Ferrari temporarily stuck against the barrier.

So when a rear spring broke on Alesi’s suspension, sending him into the pits to retire on lap 60, Panis didn’t simply inherit the lead, he had earned it. And most of his rivals were busy demonstrating just how many ways there are to lose a grand prix.

Martin Brundle’s final Monaco Grand Prix ended when he spun his Jordan three laps after switching to slick tyres. Luca Badoer let Johnny Herbert lap him at Mirabeau but didn’t notice Villeneuve creeping up the inside – the Forti was eliminated on the spot and Villeneuve retired a few laps later.

By now it was clear the two-hour time limit would be reached before the drivers had completed all 78 laps. Just seven cars were left running and with spots of rain falling three of them managed to eliminate themselves in a single crash.

Irvine, running last and out of the points, set things in motion when he spun at the same place Schumacher had. He kept out of the barriers, but with yellow flags waving he spun his Ferrari around at the exact moment Mika Salo rounded the corner with Hakkinen filling his mirrors. The result was a fender-bender which eliminated all three.

With Frentzen heading to the pits on the penultimate lap, that left Panis leading a fast-closing Coulthard and Herbert as the final lap began. The chequered flag came out after 75 laps of the planned 78, but only three cars went the distance in an exceptionally gruelling race.

It had, however, produced a thoroughly deserving victor.

After holing up in the Ferrari motorhome for a while, Schumacher emerged to faced the media. “I am extremely upset,” he told them.

“Upset and angry with myself, because I alone am responsible for this mistake. It’s an incredible mistake. I hit the kerb, couldn’t control the car, it’s all my fault.”

His first win for Ferrari would have to wait. But while it hadn’t been a successful day for Schumacher, one of his helmets had returned to the podium.

Prior to the race Coulthard had discovered his helmet would not de-mist properly. As he and Schumacher shared similar sponsors his rival generously leant him the model he had worn to third place at that year’s Brazilian Grand Prix. Coulthard went one better, creating a surely unique instance of the same helmet appearing on the podium twice courtesy of two different drivers.

Coulthard later revealed in his autobiography that he pulled some strings to ensure that helmet went into his collection instead of that of Ron Dennis. After Schumacher agreed to let him keep it, Coulthard had a replica made up for his boss. “He’ll find out when he reads this book,” Coulthard noted. “He shouldn’t have pissed Michael off.”

While Panis would no doubt have wished his first grand prix victory to have been followed by more, he claimed one of Formula One’s most unlikely victories and greatest underdog triumphs. It was the final win for Ligier, 15 years since their previous triumph at Canada, and it remains the most recent success for a French driver and team.

Panis collected the tricolour on his in-lap. “When I was handed the French flag I couldn’t resist taking it,” he said. “Ever since seeing Alain Prost do it, I’ve always wanted to see it happen again.”

“But who could imagine it would be my turn next?”

28 comments on “20 years ago today: Three cars stagger to the flag in Monaco”