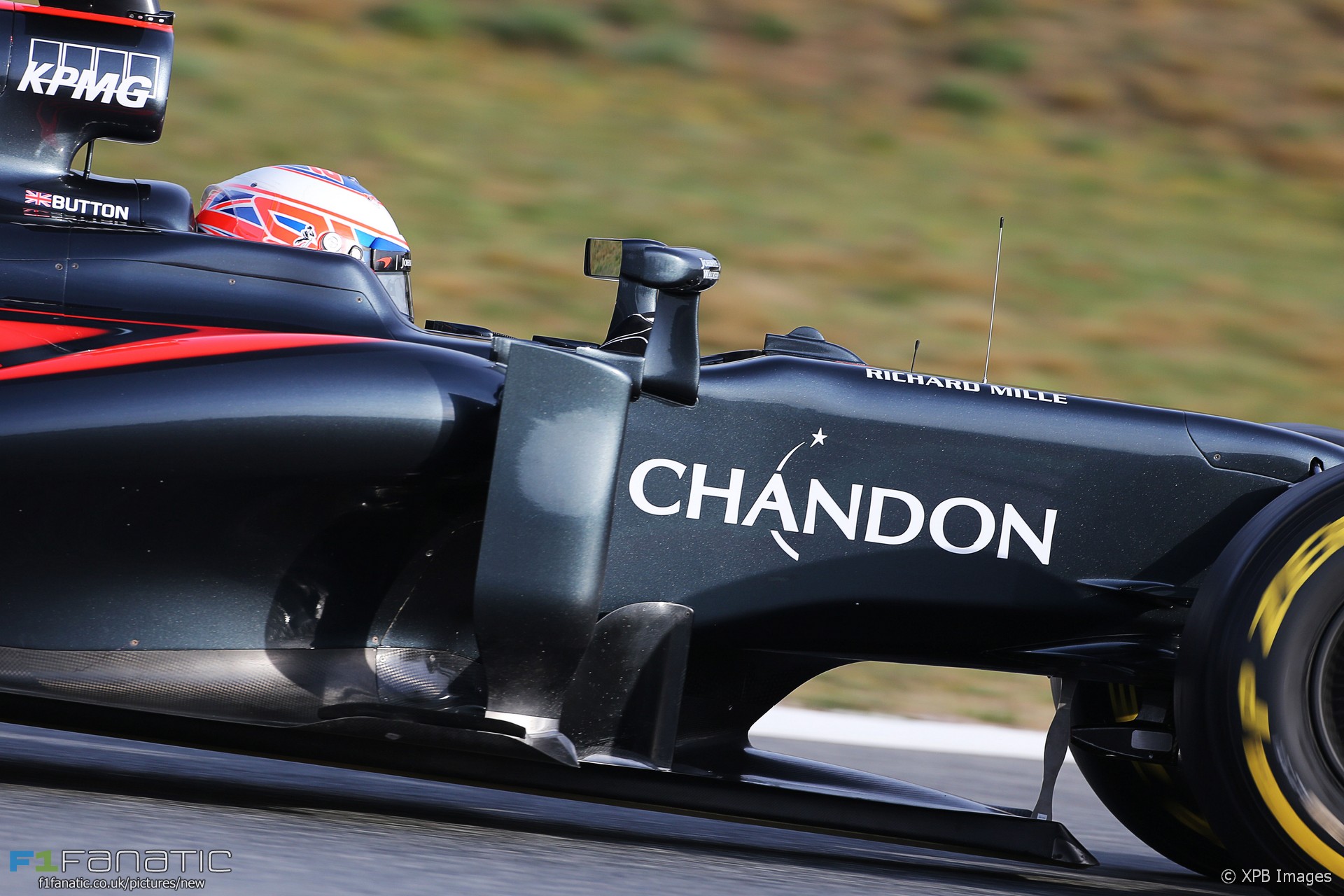 Are F1 teams still struggling to find sponsors? Find out who’s added new names in time for the start of the 2016 season.

Mercedes begin the new season looking to extend a crushing run of success, yet this seems not to have made them an attractive sponsorship opportunity.

The most significant change to the team’s livery over the winter break is the disappearance of mobile phone brand Blackberry whose logos had been on the car for the last three years.

One potentially significant partnership does not feature any branding on the car. Pure Storage (second image) supplies the team’s data retrieval systems which allows them to retrieve information from their cars more quickly when in the garage – a useful advantage in testing when the team was able to cover significantly greater mileage than its rivals.

There have only been minor changes to the sponsor roster at Ferrari. The discrete Haas branding which appeared in 2014 has inevitably gone as its team has arrived in F1.

On addition to the SF16-H is the logo of Singha Beer on the sidepod wing. The Alfa Romeo branding which appeared last year remains on the engine cover, but president Sergio Marchionne continues to make noises about having an Alfa-branded team in the future.

Williams announced an extended one-year deal with Finnish trading conglomerate Wihuri during the off season, and their logo takes its new place on the front wing endplate. Menswear retailer Hackett has been given an increased presence on the side of the car, whilst Kemppi and Genworth logos have both disappeared.

The fracturing of Red Bull’s relationship with Renault has had consequences for the team’s livery. The exchange of Renault logos for TAG-Heuer – the Swiss watch Manufacturer lending its name to the team’s engines this year – is just the start. Title sponsor Infiniti, whose parent company Nissan is 43.5% owned by Renault, has also gone.

Telecommunications company AT&T have an extended presence on the rear wing endplate this year, whilst the logo of race-gear supplier Puma appears on the sidepod wing. The arrival of TAG also means the Casio branding has gone from the car – it has been transferred to sister outfit Toro Rosso.

Force India’s livery has always had a high alcohol content but it has reduced slightly this year with the disappearances of with Mexican wine brand Cavall and vodka makers Smirnoff.

Technology company Channel IT and infrastructure firm Consorcio Aristos have all disappeared from the car. However energy drink makers Hype have increased their backing and now have bigger logos on the rear wing as well as on the drivers’ overalls.

Renault is yet to reveal its final livery for 2016 however an image which appeared on social media yesterday suggests the team plans to swap black for yellow.

Many names from the Lotus sponsor roster have remained including Microsoft, Total, EMC2 and minority shareholder Genii. Among those no longer present are Bidvest, Richard Mille (now with McLaren), Saxo Bank and Yotaphone.

Most significantly, Venezuela’s crisis-hit state petroleum manufacturer PDVSA has pulled its backing and with it has gone former driver Pastor Maldonado. His replacement Kevin Magnussen brings long-time sponsor menswear brand Jack and Jones with him, but its much smaller presence indicates less money has exchanged hands.

Renault now carries the logos of its related brand Infiniti instead of Red Bull, and audio systems company Devialet has also joined the team.

Spanish oil company CEPSA bought the naming rights to the Real Madrid football stadium last year but evidently felt its Toro Rosso sponsorship was no longer worth the expense. Red Bull has filled the gap on Toro Rosso’s rear wings with its Cola brand – a product it only sells in a small number of countries.

Toro Rosso has also lost backing from Nova Chemicals, but has at least picked up Casio from Red Bull’s main team.

Marcus Ericsson recently remarked that Sauber could do with “a couple of good sponsors”, and recent reports that the team’s staff were paid late last month raised fresh concerns over their finances.

The team has added several new names to the C35 but they do not appear to be high-value deals. The car’s rear wing end plate now features global enterprise solutions company IFS, snack brand Malbuner Power Slice and finance and business broadcaster CNBC, which previously sponsored Marussia in 2011.

Swiss watch manufacturer Edox makes an appearance on the bargeboards in place of former sponsor Oerlikon.

McLaren’s cars have become increasingly blank in recent seasons but that trend appears to be reversing. The team announced its deal with Chandon for 2016 late last year and has also added the logos of Swiss watchmaker Richard Mille, formerly a Lotus sponsor, whose logo appears just in front of the wing mirror.

The team has also renewed its deal with Johnnie Walker, a partnership which appeared to be in jeopardy when the whiskey brand signed up with FOM as F1’s official whiskey brand in 2014.

However the vacant sidepods and in-house McLaren branding on the rear wing indicate Ron Dennis is sticking to his guns about not cutting the team’s rate card prices despite its lack of success in recent years and the difficult sponsorship market.

Flex-Box and Airbnb, who arrived as Manor sponsors last year, have not stayed for this season. The team has added backing from music identification app Shazam on the rear wing endplate.

The main plane of the rear wing and the car’s nose bears the logo of Indonesian energy company Pertamina, which is paying for Rio Haryanto’s seat at the team. The colouring of the rear wing logo was tweaked during pre-season testing.

F1’s new team was rumoured to be considering a yellow colour scheme for 2016 before Renault’s return as a factory outfit was announced. Instead the VF-16 is kitted out in the colours of Haas Automation, which means another mostly colourless car on the grid, albeit with some red highlights.

“Connecting Haas Automation with F1 in name and in practice is the best way to grow our business and elevate Haas Automation to a premium, global brand,” said Gene Haas when the car was unveiled in Spain.

There are few other logos on the car. Swiss watchmaker Richard Mille, a personal sponsor of Romain Grosjean, has transferred from Renault. A deal has also been struck with Alpinestars to supply racegear, and so their logo appears on the sidepod wing structure.

The car bears the Stars and Stripes on both sidepod vanes. On the right-hand-side the ‘reverse side flag’ is used which is consistent with common practice for displaying the American flag.