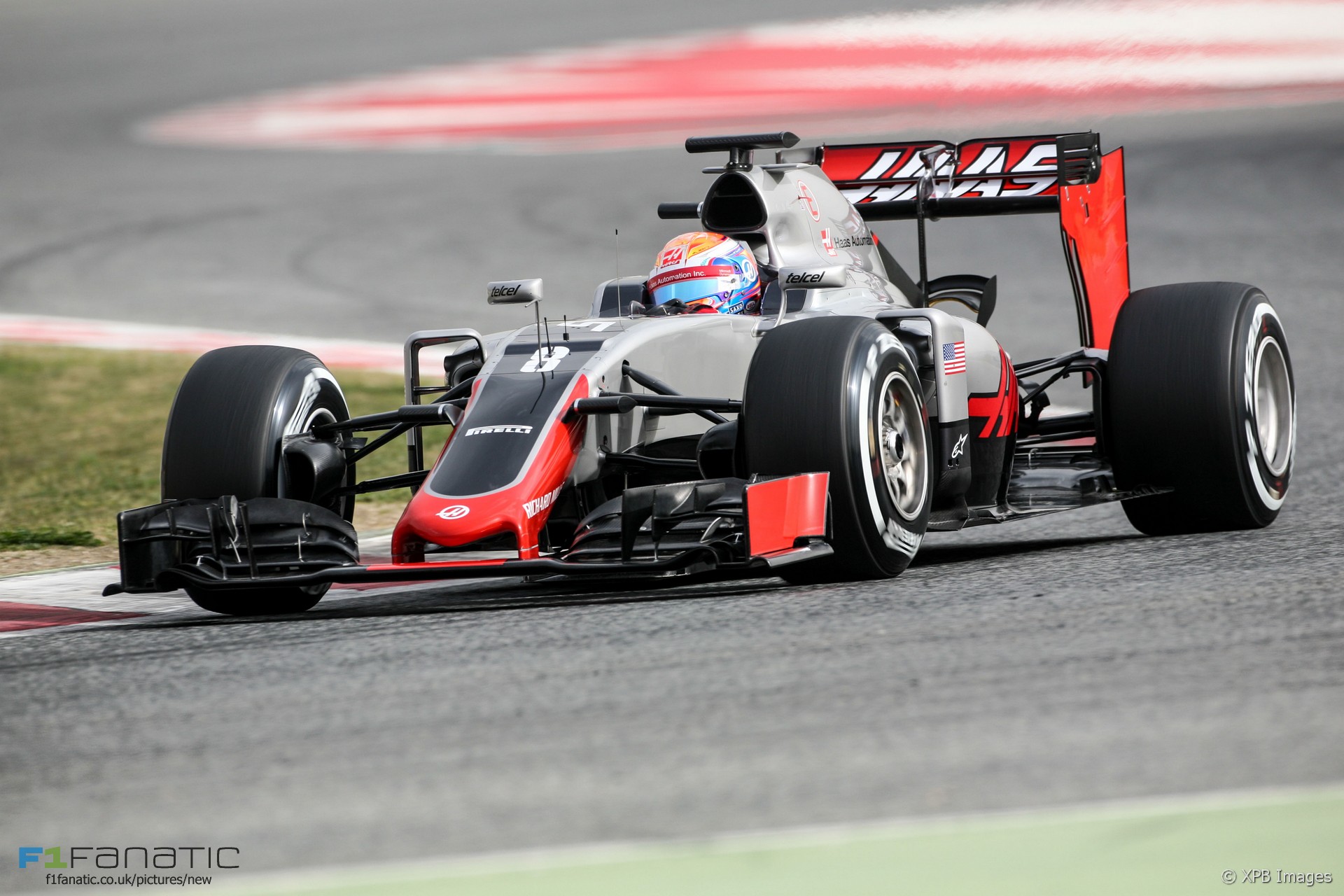 Huge interest surrounded the unveiling of the Haas VF-16 – the first car produced by a new Formula One team since 2010.

Securing a supply of 2016-specification Ferrari power units should increase the team’s chances of being competitive from the off, but the technical collaboration between the two runs much deeper than that. By exploiting the ‘listed parts’ regulations to the fullest extent, Haas is drawing as deeply from the expertise of the team which finished runner-up in last year’s championship.

The listed parts regulations stop well short of allowing teams to run full ‘customer cars’ so while there’s plenty of Ferrari DNA in the VF-16 there are significant areas of the car which are Haas-original. But an understandable desire to follow the lead set by F1’s front-running teams means there are many similarities between the two designs. Haas has also recruited several Ferrari staff and has access to its wind tunnel.

The car ran well out of the box on its first day of testing yesterday. The only significant problem for Romain Grosjean was a front wing failure which occurred at high speed. However the team swiftly had the car back on track and fitted a revised wing to the car during the second day of testing: a promising display of the new team’s operational readiness.

Outside of the ‘listed parts’ restrictions there are two significant areas where Haas must do their own design work. These are the monocoque and all bodywork which comes in contact with airflow – which there is a lot of.

Haas has not gone for the full short nose/thumb-tip preferred by the likes of Red Bull, but a halfway house between that and the more stubby Mercedes/Renault approach. The front wing mounting pylons are spread apart to allow for more airflow beneath the front bulkhead, whilst the rounded tip is simple but effective. It stands to reason that with this being their first season and as they need to complete as much mileage as possible their priority will have been to get the car through the crash tests and on the track.

The front wing has Ferrari design cues all over it: the outboard section, endplates and cascade winglets are very SF15-T-esque. Haas themselves admit they drew inspiration from other teams’ designs when conceiving their first F1 car, and the front wing’s inboard flaps are much like those on last year’s championship-winning Mercedes.

Further up the nose and at the very front of the monocoque is a small bulge where the vanity panel has to clear the heave spring element of the front suspension. This appears to be a temporary panel which may well be replaced with an S-duct-compatible design ahead of Melbourne. Adopting a current car design trend such as that would be another sign the newcomers mean business.

Both front and rear suspension components are under the listed parts scheme, so Ferrari send these bits over to Dallara for assembly. The wishbones, pushrod set-up, steering arm and internals are all identical to that of the SF16-H (see image), although they can still play around with the geometry slightly.

The Haas rear suspension is connected to a Ferrari gearbox, too, so this will all be the same as the Scuderia’s latest car.

As the suspension is attached to the hubs, it makes sense for Haas to design brake ducts around them similar to that of Ferrari as well. In fact, both the front and rear brake ducts are virtually identical to the Maranello outfit.

The parts they are running at present will be adequate for testing purposes but expect the race specification versions to be available next week for the final test.

This is an area where the VF-16 is unique and it is clear from the design it is an area of infancy for Haas.

The split triangular airbox (the upper inlet feeding a small cooler and the lower providing air for the turbocharger’s compressor) is supported by two sculpted legs to provide strength to the roll hoop, whilst a secondary inlet underneath is used to cool some of the ERS electrics.

Although the sidepods share a similar inlet shape to the Ferrari their overall profile differs considerably. Most likely the team’s inexperience with the cooling of the power unit has led them to take a more conservative route.

Hence we see a tapering of the rear bodywork as it forms the Coke-bottle section. Beneath the main aperture on each side are two thin slots which, like the smaller inlet beneath the roll hoop, will provide cool air to the electronics of the car. Most teams incorporate these sub-inlets within the main inlet, but Haas is probably being extra-cautious.

The vertical turning vanes that sprout from the sidepod shoulder are largely similar to Ferrari, as are the wing mirrors. Again expect further developments in this area as they are quite basic at the moment.

The VF-16 also copies over the turned-down blades on top of the roll hoop from the Ferrari, albeit a less aggressive form.

The rear wing is very similar to Ferrari’s aside from the central mounting pylon. The main exhaust outlet is, like the majority of the field, flanked by two wastegate pipes beneath it.

Haas appear to have converged on the same floor solution as Mercedes ahead of the rear tyre, installing four L-shaped slots to divert tyre squirt away from the diffuser. This is an intriguing area of development and another area where we will be able to benchmark F1’s the newest team’s ability to keep up with the development pace of its rivals.