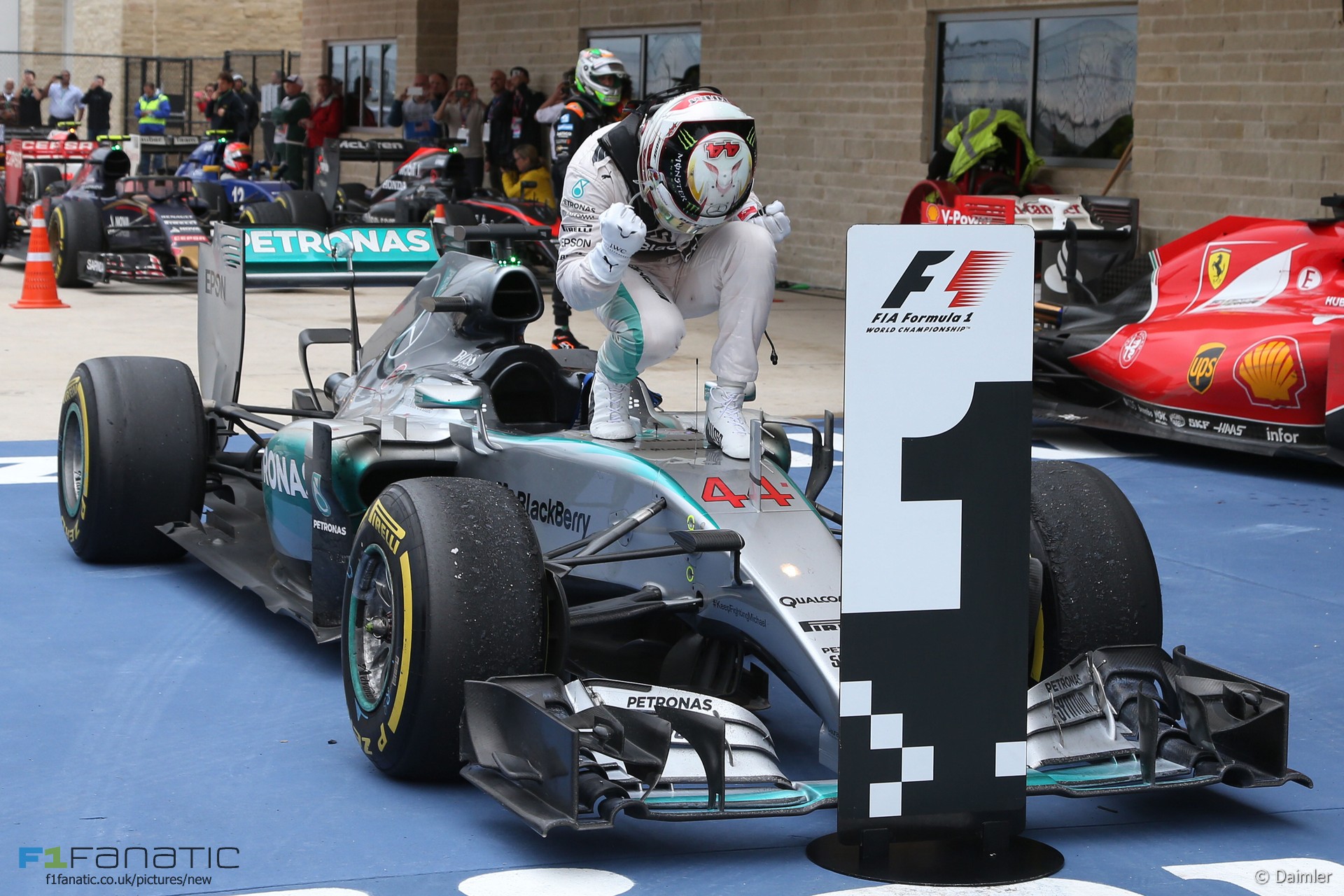 Lewis Hamilton displayed the qualities of a champion as he clinched his third title in the United States Grand Prix: he was fast, he was forceful, and he had a little bit of luck on his side.

After two days of almost uninterrupted rain, which led to a truncated qualifying session being held on the morning of the race, the weather finally cleared in time for the grand prix.

The result was a thrilling race of almost constant action and incident which provided a superb backdrop to the title decider.

Hamilton gets tough with Rosberg

Just four hours after taking pole position, Nico Rosberg lined up at the head of the field for the third race in succession. The track was damp, every car in the field was on the intermediate tyres, and Rosberg was determined to keep them all behind him – something he had failed to do from his previous two pole positions.

At the last race Rosberg had kept Hamilton tucked up smartly, only for his car to let him down a few laps later. At Suzuka Hamilton simply got away better and made the most of his advantage, batting Rosberg aside at the first corner as if he were a pesky fly.

Within a few seconds of the lights going out at the Circuit of the Americas, Rosberg must have known he was heading for a repeat of the latter, though he was probably surprised by how forceful Hamilton was at turn one. His team mate missed the apex of the corner by metres as he ran Rosberg completely off the road, which allowed both Red Bull and Sergio Perez’s Force India to separate the pair of them.

“That wasn’t intentional,” Hamilton claimed afterwards. “We both [braked] very deep into it and I understood he was on the outside and in the wet that’s where the grip is, so he was turning and I wasn’t turning so we touched.”

Red Bull fly in the wet

The race was running to the usual script in one respect: Hamilton was through into the lead. But he wasn’t pulling away: Daniil Kvyat, who had nabbed second place off his team mate into turn three at the start, closed to within a few tenths of him, and only the Mercedes’ superior straight-line grunt kept Hamilton ahead.

Rosberg had taken fourth back from Perez further around the first lap but he wasn’t gaining on the Red Bulls either, until on lap five a Virtual Safety Car period was declared due to debris from a series of first-lap collisions. At this point Rosberg had been over three seconds the third-placed Red Bull of Daniel Ricciardo, but under the VSC this fell to less than a third of what it had been.

As the VSC period came to an end Hamilton backed the Red Bull drivers up in order to get away more quickly, which inadvertently helped his team mate. Rosberg flew around Ricciardo at turn three and then dispatched Kvyat on the approach to turn 12 without even having the benefit of DRS.

The Red Bulls were struggling to reheat their tyres following Safety Car periods, but as the track dried out they were immediately back onto the tails of their rivals. The two Mercedes drivers had been concerned about front tyre degradation during their pre-race reconnaissance laps.

Kvyat and Ricciardo were especially strong coming out of the long turn 16/17/18, and at the end of lap 12 Kvyat used a run from there to make an ambitious dive down the inside of Rosberg at the final corner. It didn’t work out for him – Kvyat slithered onto the run-off and Rosberg regained the place – but it paid dividends for Ricciardo. Having also passed Kvyat he then passed the Mercedes when Rosberg went too deep into turn one.

Three laps later, Ricciardo took a tighter line than Hamilton on the way into turn 16, held it all the way around the subsequent corners and came out in the lead of the race. As he came past the pits he drove as close as he could get to the pit wall, seeking all the cooling water after pushing his tyres hard with that move.

Hamilton’s tyres were giving up: Ricciardo was instantly over a second quicker than him, and Rosberg was filling his mirrors. It took just two laps for his team mate to find a way past, and b then Hamilton had already decided on making the switch to slick tyres.

Marcus Ericsson had acted as the bellwether, switching to slicks on lap 16 and posting a competitive middle sector time. Jenson Button did the same on lap 17 and the next time by Hamilton was one of five more drivers to do the same.

Being the first of the leaders onto slicks didn’t help Hamilton regain his lost places. Rosberg and both Red Bulls came in on the next lap, and despite being stacked behind Ricciardo, Kvyat emerged ahead of Hamilton.

But with the track having crossed over from wet to dry, Mercedes’ crushing superiority was restored. Hamilton got down the inside of Kvyat at turn 12 with DRS on lap 21 but ran onto the run-off and dropped behind again. The next time by in the same DRS zone both Mercedes passed their Red Bull rivals before they even reached the braking zone, and by lap 26 Hamilton had caught and passed Ricciardo in the same manner for second place.

Approaching half-distance Rosberg was 12 seconds clear of Hamilton and seemingly on his way to a victory which would keep the championship open for at least one more race. But his lead was eradicated when Ericsson came to a stop with an electrical fault at the exit of turn 11.

Both the Mercedes drivers stayed out despite having further pit stops to make, and when the race began again after a lengthy delay they left the field for dead, lapping over two seconds quicker. Hamilton had a clear edge, regularly taking tenths out of Rosberg, and he was within DRS range as lap 37 began. But before he could strike there was another interruption.

Nico Hulkenberg had been shaping up to pass the struggling Ricciardo at turn 12 when the Force India’s front wing failed. Robbed of downforce, Hulkenberg clattered into the luckless Ricciardo. The Red Bull continued but Hulkenberg pulled to a stop with broken suspension, leading to a second VSC period.

Rosberg took the opportunity to make his final pit stop for fresh soft tyres – as everyone had started on intermediate tyres, no one was required to use the mediums as well as the softs. Despite the healthy margin they enjoyed Mercedes declined to bring both drivers in, leaving Hamilton out to take the lead.

Behind him were Vettel and Max Verstappen, who were trying to run to the end having pitted during the Ericsson Safety Car, and then Rosberg. But within three laps Rosberg was DRS-ing his way past Vettel for second place, and with Hamilton still needing to pit again the number six Mercedes was still on a victory course.

Hamilton eventually made his pit stop during the day’s fourth interruption and second Safety Car period. This one was caused by Kvyat, who spun into the turn 20 barrier with 15 laps to go. Ferrari also brought Vettel in to give him the benefit of a fresh set of soft tyres for the last dozen laps at a cost of just one position, to Verstappen, who he was easily able to pass once the race began again.

Rosberg’s tyres were five laps older than Hamilton’s but when the race restarted for the final time on lap 47 he immediately pulled one-and-a-half seconds clear. It looked like he had the job done and Hamilton would have to wait another week to secure the title.

But as he accelerated out of turn 15 for the 48th time his rear wheels spun and Rosberg slewed onto the run-off. “I’m assuming that it’s a mistake that I made,” he said afterwards, “just getting too much wheelspin, going away on the cold tyres, the tyres weren’t fully up to temperature yet.”

Hamilton flashed past and now the title was “so close that I could smell it”.

Vettel could have denied Hamilton the title had he risked a last-lap lunge at Rosberg: the pair began the final tour separated by just six-tenth of a second. But Vettel held back, perhaps mindful of the trouble such a move got his team mate into at the last race. Nor was Rosberg’s rancour over the turn one incident deep enough for him to hand over second to Vettel, postponing Hamilton’s title celebrations, and costing his team a one-two.

Verstappen came home fourth after a fine drive in which he briefly passed Vettel only to run wide at turn 12. Kimi Raikkonen took exception to Verstappen’s defending at one point, complaining the 18-year-old was “forcing me off the circuit”.

“If that is legal then I will do the same next time,” threatened Raikkonen. He never got the chance: after switching to slick tyres he spun into a barrier, and though he got going again rising brake temperatures forced him into the pits and retirement.

He was one of eight retirements during the race, which included both Williams drivers. Felipe Massa hit Fernando Alonso at turn one and later parked in the pits with a suspension problem. The the McLaren driver slipped out of the points when Honda’s latest engine developed a glitch. “Has he got a penalty for the start?” Alonso enquired of Massa late in the race. “No, he has retired,” came the replay. “Well I am not sad for that,” answered Alonso.

A frustrated Romain Grosjean also retired after being hit at the start. Jenson Button seized on the opportunity offered by the spate of retirements, taking sixth behind Perez. He finished seventh on the road but was promoted one place when Carlos Sainz Jnr was given a five-second penalty for pit lane speeding. The Toro Rosso driver was fortunate not to be censured further after causing contact with Ricciardo by changing direction in the braking zone for turn 12.

Ricciardo came home eighth behind Pastor Maldonado and Felipe Nasr, the latter incurring the wrath of his team by hitting Ericsson on lap one.

‘Standing on the same line as Senna’

Since he arrived in Formula One much has been written about Hamilton’s idolisation of Ayrton Senna. Having equalled Senna’s tally of 41 wins earlier this year, Hamilton’s latest success had special significance for him as he has now also won as many championships as his childhood hero.

Because of that, though Hamilton’s previous two championship successes came in the tension of a final-round showdown, according to him the third felt no less special for being secured earlier in the year.

“This one still feels just as special, if not more special,” he said. “I think this has to have topped last year for me, being as it’s equalling Ayrton.”

His triumph is also a further vindication of his decision to leave McLaren in 2012, a move which many doubted the wisdom of at the time.

“I thought that I would win championships at this team and as I said, that is why I moved here,” said Hamilton. “It was never ‘I’m just going to take a chance.’ I did my due diligence and I believed it was the right choice.”

“As a kid, I just wanted to be world champion and so it’s kind of crazy to think that me and Ayrton, in terms of championships, stand on the same line which is just the greatest.”