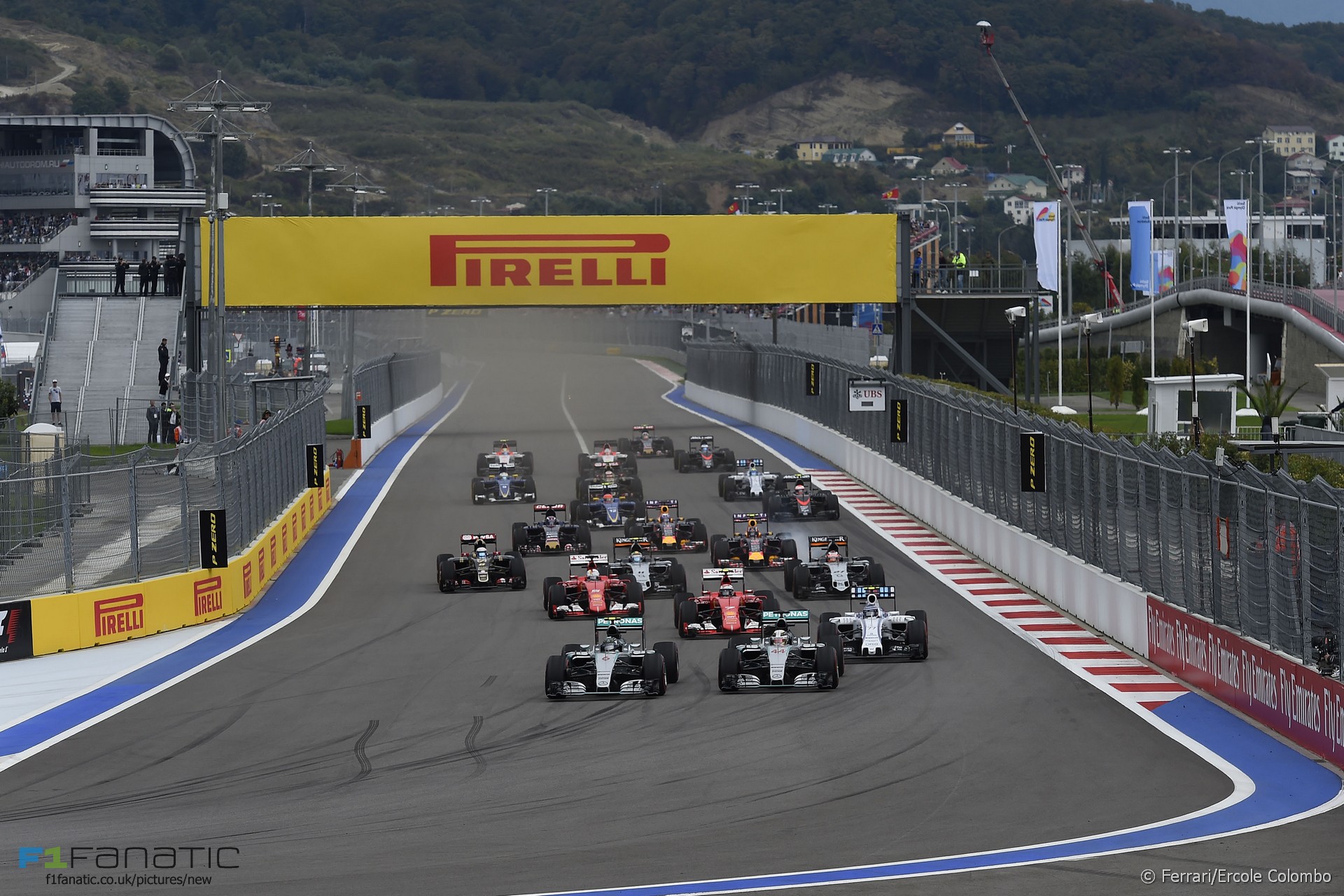 The dramatic conclusion to the Russian Grand Prix helped it earn a considerably better score than last year’s race: 6.9 out of ten compared to just 4 for the inaugural event.

While many were disappointed Nico Rosberg’s retirement ended the battle for the lead, a three-way contest for the final podium place provided excitement.

Romain Grosjean’s high-speed crash brought out the Safety Car for a second time and added an interesting strategic twist to proceedings:

The early safety cars mixed up the strategy and helped the fuel consumption a bit, which made the last ten laps or so very exciting.
@George

I really enjoyed that race, some great battles. Perez’s achievement is much like I said about Grosjean’s achievement in Spa, it’s what F1 needs – sure two of the drivers I really like had to fall by the wayside but we need unexpected people on the podium just because we need some surprises every once in a while
@Bezza695

A bit dull for some long periods. I was only woken from my doze by Raikkonen’s over-optimism on the final lap.

Rosberg’s retirement robbed us of some form of battle at the front. There was some action, so not the worst race this season, not by any means. Still, this Sochi circuit hasn’t won me over yet.

Post race penalties also make the race feel tainted. I wish they’d try something else and apply a suitable penalty for the proceeding race, or something. Although the penalties seem fair, I don’t like the race result being changed hours after the flag has dropped.
Andy (@Andybantam)

Not terrible, but not great either.

Felt sorry for Rosberg, he seemed to have the pace to beat Hamilton this time. With him out there literally was no fight at the front at all and given Mercedes’ car domination it was a bit boring.

Then again the Ferrari’s battling and then the fight for third was nice. Although happy for Perez, desperately sad for Bottas – he fully deserved that place.

Although I’m a fan of Raikkonen… what on earth was he doing? Scrappy against Vettel and sloppy lunge into Bottas? He was a bit of a mess today.
Adam (@Rocketpanda)

While F1’s Drag Reductions System has been a cause for concern on more than one occasion this year, there were mixed views on how it affected the Russian Grand Prix:

Surprisingly good race. Shame about DRS (as always) and Rosberg going out, but as my expectations were so low maybe that had an influence in giving it an eight.

I also think the camera work was very good at giving a sense of speed at this race, many static cameras. It made up for the surroundings somewhat.
@john-h

The only thing that was missing was a fight for the lead. Unfortunately Rosberg had to retire and Ferrari aren’t yet ready to challenge Mercedes every race weekend.

Was it really a surprise that the Honda and Renault-powered cars get passed at the end of the start/finish-straight? I don’t think so.

On the final lap Raikkonen was 0.36 behind Bottas over the line, but couldn’t even come close enough to out-brake the Williams into turn two, despite having a lot more grip at this point. This shows that the DRS was fine this weekend and not too powerful.

In fact a lot of overtakes were done without DRS: Bottas on Raikkonen at the restart, Vettel on Raikkonen into turn five, plus a lot of fights were fought in the corners.
Srdjan Mandic (@Srga91)

Last year many felt a softer tyre selection would improve the racing at Sochi. But even after a better second race, many remain unimpressed with the venue:

Pretty standard 2015 race in my opinion, lots of DRS action and stuff. Sadly we lost Rosberg right at the start, but Grosjean’s accident meant that a couple of drivers did an alternative strategy, which pretty much made the rest of the race interesting.

I always thought Sochi Autodrom is a very decent track and 2014 GP turned out to be dull just because of overly conservative tire compounds. Today’s race proved that I was right.
@Huhhii

A relatively dull race enlivened only by collisions and retirements.

My heart sank when Rosberg retired and Hamilton pulled away from the pack, but actually it was a very good race behind him. Bottas and Raikkonen provided a lot of excitement and Perez’s race had a well-deserved outcome. I don’t think much to the circuit, but I enjoyed that.
tgu (@thegrapeunwashed)

Did F1 put on a race to rival the weekend’s other two major events?

After watching a real racing for six hours before this (Bathurst) I couldn’t give it more than two.
@Toxic

I went in to this race expecting a borefest, especially since I had watched the Bathurst 1000, the Fuji Six hours and the support races beforehand (insomnia does have its perks sometimes), but I was pretty well amused despite the terrible track (I still have no idea which corner is which) and DRS.

Then again, it were moments and a handful of battles wrapped around a standard 2015 race.
Nick (@Npf1)

And for the second year running, some felt the Russian Grand Prix was tainted by the presence of a very controversial figure:

You can’t argue that F1 is non-political and then at the same time have Putin on the podium smiling and shaking hands. If this is not double standards, then what is?
Lauri (@F1lauri)