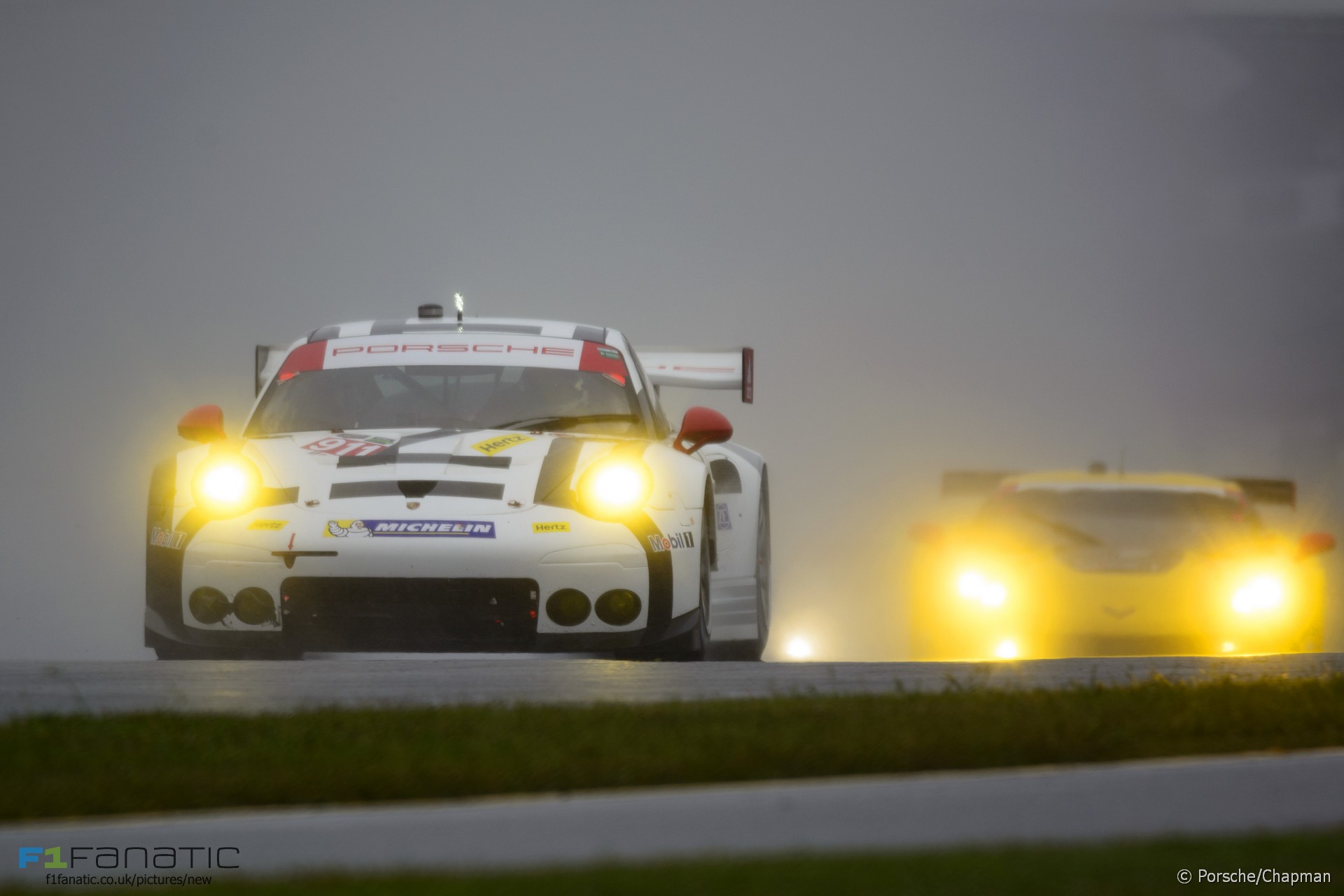 Road Atlanta played host to the final round of the 2015 United Sportscar Championship with the Petit Le Mans, and saw a shock winner.

Elsewhere Vitor Baptista placed one hand on the 2015 Euroformula Open trophy and torrential rain caused havoc as the World Rally Championship returned to the French island of Corsica for the first time since 2008.

Heavy rain at Road Atlanta disrupted the 18th running of Petit Le Mans, which also served as the United Sports Car Championship finale. The race began in treacherous conditions and was brought to a close just before the eighth hour of a scheduled ten.

Nick Tandy and Patrick Pilet shared overall honours for Porsche. Tandy followed up his Le Mans 24 Hours victory with Nico Hulkenberg and Earl Bamber, but instead of a 919 Hybrid LMP1 this victory came in the Porsche 911 RSR in the GTLM class.

This was a rare victory for a production-based car over the prototype classes, which also handed the GTLM class championship to Pilet. In the car during the eighth hour, Tandy overtook the Corvette Daytona Prototype of Eric Curran for the overall lead, then pulled out between three and six seconds each lap. Tandy led the field home to the early chequered flag, ahead of another GTLM car – the #24 BMW of John Edwards, Lucas Luhr and Jens Klingmann.

Third overall and winners of the ‘top’ class was the #5 Corvette DP of Joao Barbosa, Christian Fittipaldi and Sebastien Bourdais, giving them second consecutive USCC title, ahead of the Riley-Ford of Scott Pruett, Joey Hand and Scott Dixon. CORE Autosport took the title in PC, its fifth consecutive win, and the second in a row for drivers Colin Braun and Jon Bennett. With Pilet taking GTLM honours, the GT Daytona class saw Scuderia Corsa taking the title with Townsend Bell and Bill Sweedler.

RP Motorsport driver Vitor Baptista took another step towards the title in race one with the win, his sixth of the season. Yu Kanumaru, fresh from his Formula Renault 3.5 debut, took second after starting on pole, while Konstantin Tereschenko finished third having been given a five second penalty for exceeding track limits. The fight for the win was tight between the three, with Baptista and Kanamaru making contact resulting in the Japanese driver suffering minor front wing damage on lap three, though a clean race gave the Brazilian victory.

The second race of the weekend saw a brand new winner, with RP’s Damiano Fioravanti taking the chequered flag ahead of team-mates Baptista and Igor Walilko. Tereschenko took pole position in wet conditions, while Baptista was down in seventh. Fioravanti quickly overtook the Russian polesitter and Walilko followed closely, but when Tereschenko tried to get second place back into the chicane, they collided, resulting in Tereschenko retiring with suspension damage. The result means Baptista extends his championship lead, 32 points ahead of Tereschenko with just 50 remaining.

Torrential rain severely affected the opening day of the Tour de Corse, with Thierry Neuville retiring early on and stage two (which was to be re-run as stage four on Saturday) being cancelled due to damage to the road caused by the weather.

Champion Sebastien Ogier took an early joint lead with former F1 driver Robert Kubica, only for both to come unstuck in the afternoon, Ogier with a puncture – and later a retirement with a gearbox issue. This handed a surprise lead to Elfyn Evans, ahead of the equally surprising Kevin Abbring, with Jari-Matti Latvala in third. Latvala soon overhauled the two in front to take a comfortable win, but Evans held off Mikkelsen to take his best ever result in second. Ogier recovered to take the power stage win – and three points – ahead of Kubica.

Six-times NASCAR champion Jimmie Johnson was one of the quartet of drivers eliminated from title contention as the first stage of the sprint for the cup came to an end at Dover International Speedway. Johnson, who has won more races than all bar two drivers this year, was prevented from progressing to the next stage of the knockout competition after an axle seal broke on his Chevrolet.

Kevin Harvick’s third win of the season kept him among the 12 remaining contenders as Jamie McMurray, Paul Menard and Clint Bowyer were also left behind.

Title contender Tyler Reddick was involved in the above nasty crash in which he got loose and inadvertently wiped out team mate Austin Theriault, who then endured a hefty impact into the wall. Reddick recovered to finish seventh – ahead of those in front of him in the Championship – but the win went to John Wes Townley.

Next round: Talladega Superspeedway (24th October)

Which of these events did you watch over the weekend? Or did something pique your interest that we haven’t covered? Let us know in the comments below.

Next weekend we have the World Endurance Championship, V8 Supercars, NASCAR, and the BTCC title decider from Brands Hatch.