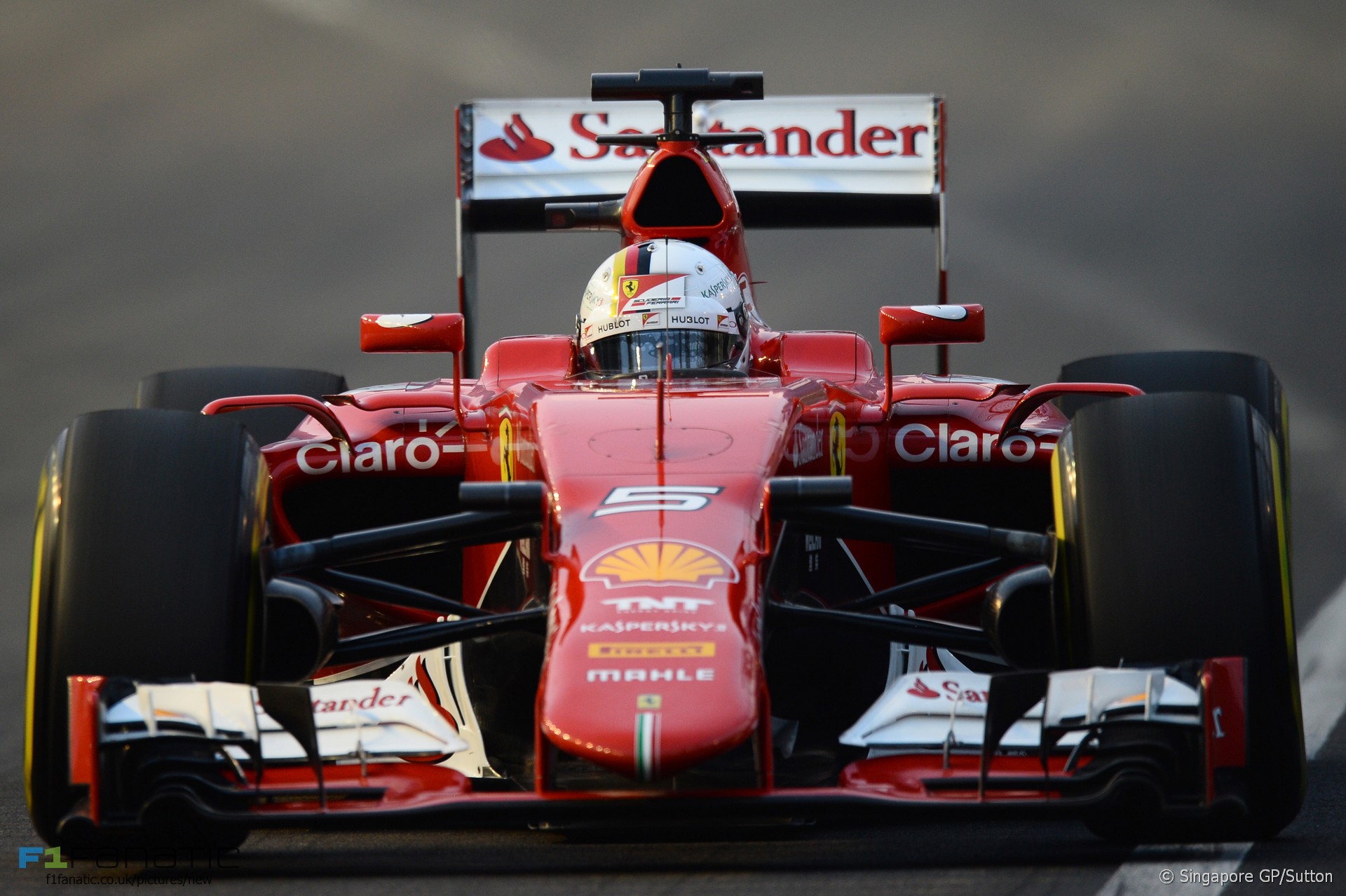 Was Mercedes’ sub-par performance in Singapore just a one-off, or was it the shape of things to come?

While the silver team had an unusually difficult time with their tyres at the last race, Sebastian Vettel also enjoyed a particularly strong weekend. Not only was the Ferrari competitive, he was in exceptional form, out-qualifying Kimi Raikkonen by a huge margin and pulling clear of his team mate in the latter stages of the race at a comparable rate.

For the second race in a row, Ferrari looked especially competitive in qualifying, and capturing a place on the front row would put them in a strong position to contend for victory.

Vettel is well into his first season at Ferrari and has got the car increasingly to his liking. He has a formidable record of success at the Singapore track, but his form at Suzuka is not bad either: during Red Bull’s 2009-13 peak he took four wins and four pole positions (and arguably only missed out on a fifth straight pole due to a KERS problem in 2013).

Suzuka is a very different track to Singapore, however, so if Vettel can be competitive with Mercedes here it will raise hopes he could make a late run for the championship. This is a long shot, however: Vettel is 49 points adrift of Lewis Hamilton so the Ferrari driver could win all of the remaining races and still lose the championship.

From the low-speed grind of Singapore the teams find themselves at one of few remaining tracks where speeds are almost consistently high throughout a lap. As well as the ultra-quick opening corners and the demanding double-apex Spoon Curve, Suzuka also features the corner which generates the highest continuous G-loading of the year: the 300kph 130R turn.

Although the track surface is now smoother than it was a few years ago thanks to resurfacing, Pirelli has brought its hardest tyre compounds to cope with what is still a very punishing layout. Expect pressure and camber levels to come under scrutiny again as this is the most demanding track of the year for tyres after Spa, where two high-speed raised concerns from drivers.

But while Suzuka is an almost universally acclaimed track and the Japanese fans are among the world’s most devoted F1 adherents, this year’s return to Japan will inevitably be a poignant one in the wake of the crash which claimed the life of Jules Bianchi last year.

Even Mercedes are not sure yet whether their struggle in Singapore was the shape of things to come. “Whether Singapore was a blip or not, we cannot take our position at the front for granted and expect not to get caught out,” said team principal Toto Wolff. “Suzuka is a track which should suit us better, so this will be a good indicator.”

On-track, Suzuka’s high-speed sections will expose the usual Renault weakness but the sinuous course will play to the Red Bull strengths – more so if it rains. Off-track, the political struggle for the team to secure what it terms a “competitive” power unit package for next year are reaching their end game, with Dietrich Mateschitz insisting he’s ready to pull all four of his cars out of F1.

Williams had excellent pace in dry conditions at Suzuka last year and should be in good shape again. Vettel’s Ferrari may be out of reach, but Raikkonen’s could be within range – providing it doesn’t rain.

Raikkonen believes Ferrari’s performance in Singapore was a culmination of their recent progress. “I think we were more surprised at Monza to be that close to the Mercedes and maybe that shows us that we made a step there and maybe we just kept doing the same things [in Singapore],” he said.

Honda owns Suzuka so this race has obvious significance for McLaren. But Fernando Alonso warned this will be another tough race for them. “Our car is well balanced and feels good to drive,” he said, “but on a circuit with such a high average speed it will be difficult to beat our competitors”.

Meanwhile there is growing speculation Jenson Button may announce his retirement from Formula One this weekend in a country which has become a second home to him.

Force India is making strides with its ‘B-spec’ VJM08: the last three races have yielded four top-seven finishes and two DNFs for Nico Hulkenberg, one due to technical problems. In Singapore he tangled with Felipe Massa and carries a three-place grid penalty into this weekend’s event.

While Hulkenberg has already been confirmed at the team for next year, Sergio Perez hasn’t, but an announcement timed to coincide with his home race next month wouldn’t be a surprise.

Unusually, Suzuka is a circuit which Max Verstappen has prior experience of but Carlos Sainz Jnr does not: Verstappen made his F1 practice debut at this race last year. Despite both drivers hitting trouble in Singapore the team came away with its second double points finish of the year and having qualified strongly at other high-speed circuits this could be another good race for them.

Lotus followed up the high of its Spa podium with two no-scores but Romain Grosjean expects Suzuka will be “a better place to exploit the positives of the E23 than Singapore”.

However doubts remain over the future of the team which is seeking to conclude a takeover deal by Renault before it returns to the High Court in the UK.

Marcus Ericsson has plenty of track knowledge from his 2009 Japanese F3 campaign, as well as having raced for Caterham last year, but Felipe Nasr will be aiming to stay out of trouble in practice and log as many laps as possible.

The team hopes that this weekend it will be able to make better use of the aerodynamic upgrade introduced at the last round.

Of all the teams, this will be an especially emotional weekend for Manor and they have asked for understanding as they reflect in a “very private, introspective way” on the loss of their driver 12 months ago.

Alexander Rossi said his surprise debut in Singapore “really couldn’t have worked out any better for me”, but both drivers will have their first taste of Suzuka this weekend.

Are you going to the Japanese Grand Prix?

If you’re heading to Japan for this weekend’s race, we want to hear from you.

Will it be back to ‘business as usual’ at Suzuka? Can Vettel keep the pressure up on Mercedes? Have your say on the Japanese Grand Prix in the comments.

72 comments on “Was Vettel’s Singapore win a one-off – or the start of a late title bid?”