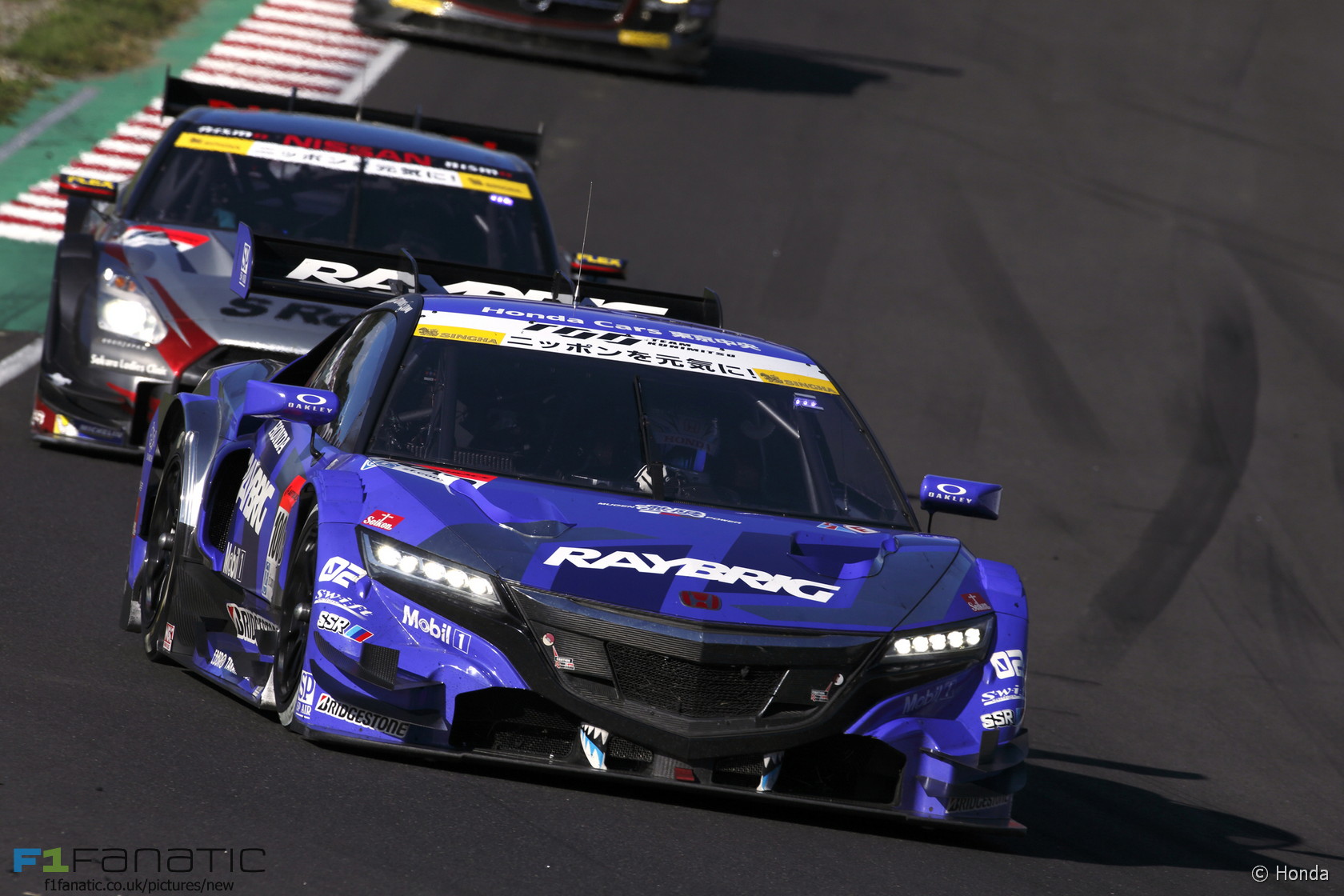 Sportsland Sugo in Murata, Japan is one of the largest sporting facilities in the country, but has one of the smallest pit lanes. So when almost the entire 42-car Super GT field tried to pit at once during a Safety Car period, chaos inevitably followed.

Also this weekend Porsche took their third win on the trot in the World Endurance Championship, the Circuit de Catalunya hosted the World Rallycross Championship for the first time and the Chase for the Cup began in NASCAR.

And the there was a very lucky escape for an F1 driver’s son in Brazil.

Round 5: Circuit of the Americas, USA

The number 17 Porsche of Timo Bernhard, Mark Webber, Brendon Hartley took its second win in a row as they closed to within ten points of the championship leading Audi of Andre Lotterer, Marc Fassler and Benoit Treluyer, who had to settle for second.

For the third race in a row the number 18 Porsche took pole position, but failed to capitalise as an electrical problem cost them the win just thirty minutes from the end. The sister car didn’t have a troubl-free race either – a one-minute penalty and an overshoot in the pits from Webber proved costly – but the pace was so quick compared to Audi, they were able to pick up the pieces. The second Audi of Loic Duval, Lucas di Grassi and Oliver Jarvis completed the podium while Toyota struggled once more.

Petter Solberg dominated the Spanish round of the World Rallycross Championship, leading the final from start to finish as he took a comfortable, unopposed win to extend his Championship lead. Johan Kirstofferson and Timmy Hansen – Solberg’s closest title rivals – completed the podium to limit the damage, but fourth placed Andreas Bakkerud failed to make the final round, being knocked out in the semi-finals.

Denny Hamlin bounced back from a spin on the first lap of the race to win the first round of the Chase for the Cup. He led a one-two for Joe Gibbs Racing

The pole-sitting Nissan GT-R of Satoshi Motoyama led the field away ahead of the Honda NSX of Naoki Yamamoto, and they were both tight at the head of pack throughout the early stages. On lap 27, two backmarkers collided and spun into the barriers causing a Safety Car period, which brought everyone into the pits, and caused the ensuing drama. As all but two of the field made for the small pit lane, cars got stuck and half the grid ended up stuck and losing a lap.

Following the drama the Nissan, now driven by Masataka Yanagida, and the Honda, now driven by former GP2 driver Takuya Izawa, were pulling a gap to the rest of the field, and Izawa made use of his hybrid system to overtake Yanagida on the main straight to lead on lap 37. Izawa led thereafter, taking the first win for both himself and co-driver Yamamoto.

The 17-year-old had been dominating the weekend up until that point, winning the opening race from pole position, before being launched into a series of barrel rolls after tangling with rival Ricardo Baptista.

Another romp to victory for Lewis Hamilton? Hardly: Mercedes were all at sea at Singapore, allowing Sebastian Vettel to take his third victory of the year, pursued by Red Bull’s Daniel Ricciardo.

Which events did you see this weekend and what did you enjoy? Let us know in the comments below.

Next weekend we have the second consecutive Grand Prix as Formula One returns to what is likely to be a very sombre Suzuka after the events of last year. Elsewhere Formula Renault 3.5, European F3, WTCC, DTM, NASCAR and the BTCC are in action while La Conco in Italy hosts the CIK-FIA Karting Championship.