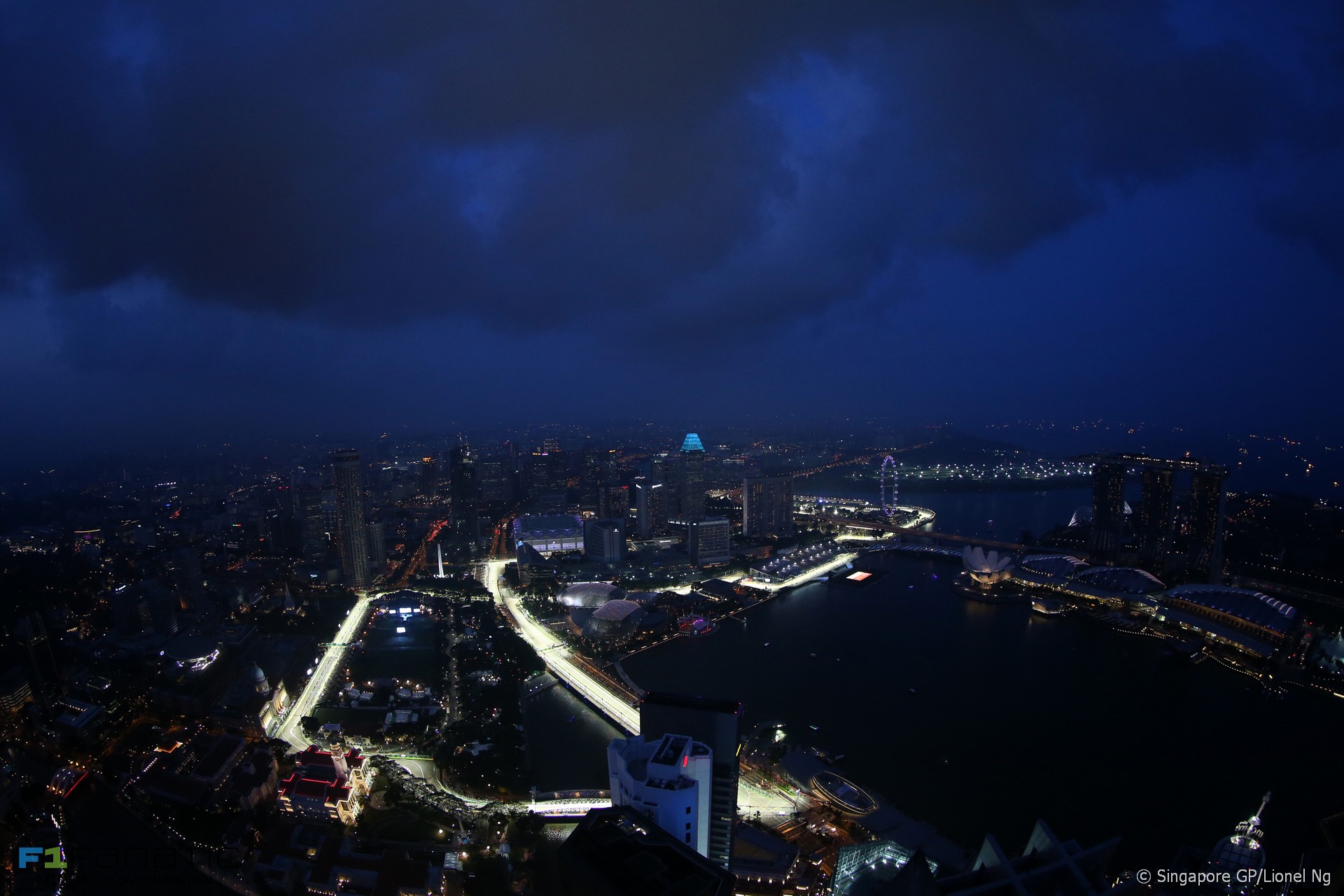 The championship situation after Monza was as if a pin had been pushed into a sagging balloon: what little tension there had been was deflated when Nico Rosberg parked his Mercedes at the Roggia chicane with three laps to go.

Now Lewis Hamilton has the advantage of knowing he can finish behind Rosberg in all of the remaining races and still win the championship. But thoughts of playing it safe will not deflect him from the pursuit of more victories.

Another win this weekend would be deeply symbolic. Hamilton, a lifelong admirer of Ayrton Senna,is poised not only to equal his hero record of 41 victories but do it as he draws level with Senna in terms of career starts: this will be his 161st.

Like Senna before him, Hamilton has a car of immense potential underneath him and he is exploiting it to its fullest. That’s why this weekend he could also become the first driver to equal Senna’s feat of scoring eight consecutive pole positions.

But Hamilton and his 19 rivals know they can take nothing for granted in one of the most punishing races of the year. The heat and humidity of Singapore is energy-sapping for the drivers and demanding for their power units. The stop-start course is especially tough on gearboxes and brakes. And being so slow, it’s not unusual for the race duration to hit F1’s two-hour time limit.

The low-grip surface typical of a street circuit requires soft tyre compounds, and as usual Pirelli has brought its softest selection. The chance of a Safety Car period is high – there’s never been a Singapore Grand Prix without one – and if one appears around the middle of the race it can tempt teams into trying to complete the grand prix without making a further stop.

However if they push it too far they can find themselves under attack from those who stop for fresh rubber. “It starts off as an understeer circuit,” explains Rob Smedley of Williams, “which develops to include tyre degradation on the rear tyres which causes traction issues in the race.”

For the third time since holding its first race seven years ago, the Marina Bay course has been revised, this time in the hope of improving overtaking opportunities. Drivers will now use the left-hand lane as they cross the Andersen bridge approaching turn 13 giving them a straight run into the hairpin. While that may make life a little easier for the drivers, it’s not likely to prove a significant change.

A technical problem also sidelined Rosberg in last year’s Singapore Grand Prix, and realistically his best chance of getting back in contention for the championship is if Hamilton suffers a similar problem this year. Mercedes, naturally, are eager that their first technical failure this year is also their last.

Daniil Kvyat suffered on his F1 debut at this track last year, having to endure one of the hottest and longest races of the year without a drinks bottle. He an Daniel Ricciardo are optimistic of a stronger showing for the team on a track where downforce, traction and braking count for more than engine performance.

Williams is optimistic about reducing its deficit to Ferrari as it introduces its latest upgrade this weekend.

However they’ve only beaten them on three occasions this year, and that includes Spa where Sebastian Vettel was comfortably ahead until his late tyre failure.

Vettel has finished in the top two in the last five consecutive Singapore Grands Prix. However between the flying Mercedes and a potentially much stronger threat from Red Bull, he may face a stiffer task to reach the podium this weekend.

Conversely this is a venue which hasn’t been particularly kind to Kimi Raikkonen. He crashed in the inaugural race but took a gritty podium finish in 2013 despite back pain.

The weakness of the Honda engine was exposed for all to see at Monza. Singapore marks a return to the type of circuit where McLaren expect to do better – Fernando Alonso was fifth in Hungary – and a decent result may help sooth the strained relations between the McLaren and Honda camps.

A small but significant upgrade package for the ‘B-spec’ VJM08 should help the team sustain its momentum and increase its chances of holding on to fifth place in the championship – which would be their best-ever result. Their sights are set higher at the moment, but realistically Red Bull’s 50-point margin over them is more likely to grow than shrink in Singapore.

Not for the first time this year Carlos Sainz Jnr is the only one of Toro Rosso’s rookie duo with prior experience of this circuit – he raced there in Formula BMW Pacific five years ago – and Max Verstappen will be learning as he goes. And if any circuit is going to expose any weakness in the 17-year-old’s ability to wrestle an F1 car for two hours, this is undoubtedly it.

At Monza Lotus lost both its cars on the first lap for the second time this year – Romain Grosjean and Pastor Maldonado also retired early at Silverstone. This was the last thing the beleaguered team needed given its ongoing financial problems. “There was some choice language for a little while after that,” team boss Federico Gastaldi admitted.

Sauber finally has its aerodynamic upgrade ready for this weekend. Head of track engineering Giamapolo Dall’Ara describes it as a “a rather significant” development, but cautioned that it will have to be “validated” first in testing – never an easy thing to do at a track with such short straights. It may be that it’s not until subsequent races that the true worth of the upgrade becomes clear.

Roberto Merhi is now fully committed to his Formula One programme having cut ties with the Pons Formula Renault 3.5 team. However as both he and Will Stevens have no prior experience of this circuit, it will be an especially challenging weekend for the F1 minnows.

Update: Manor has announced Merhi will be replaced by Alexander Rossi this weekend.

Are you going to the Singapore Grand Prix?

If you’re heading to Singapore for this weekend’s race, we want to hear from you.

Who do you think will be the team to beat in the Singapore Grand Prix? Have your say below.

25 comments on “Rosberg needs reversal of fortunes at Singapore”