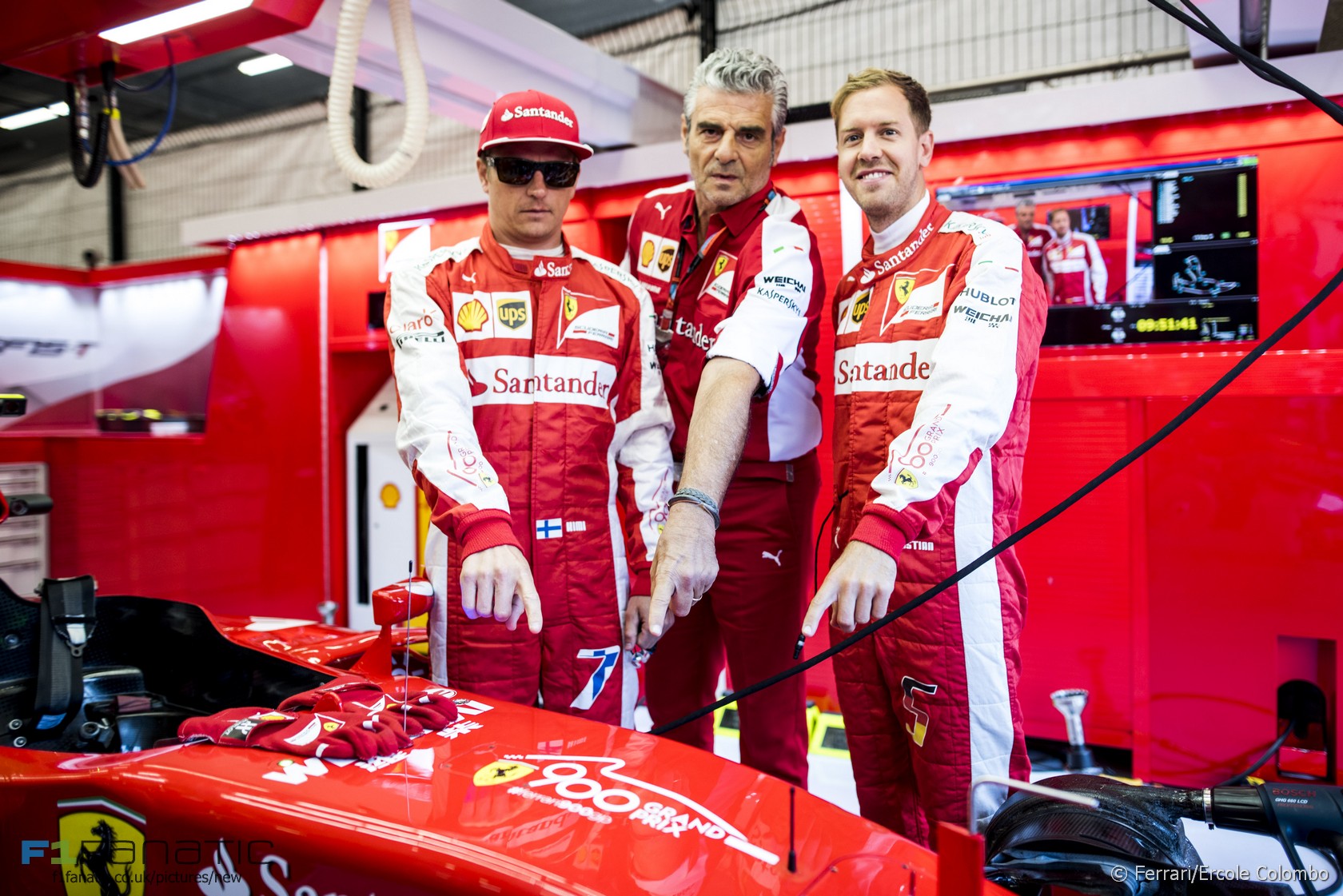 F1’s longest-running team reached a milestone at the Belgian Grand Prix. Ferrari started their 900th race, but did not come away with any silverware to add to their haul of 223 victories to date.

Ferrari’s hundredth race was an especially significant one as it saw John Surtees claim his first victory for the team, ending a two-year drought of championship success. Surtees went on to win the championship with the team the following year.

In the early seventies Ferrari were enjoying greater success in sports car racing than in Formula One, where all 15 races were won by their Cosworth-powered rivals. On more than one occasion that year Enzo Ferrari decided not to send the team’s out-classed cars to the latest round (see below). However with the arrival of Niki Lauda the following season and the return to designer Mauro Forghieri, better days lay ahead.

One hundred races later, Ferrari had racked up another three constructors’ championship titles, Lauda had taken a pair of drivers’ titles, and the 1979 crowns were also won by Ferrari and its latest champion, Jody Scheckter.

However at the team’s 300th race Scheckter’s team mate Gilles Villeneuve was the centre of attention, famously dragging his three-wheeled car back to the pits after a puncture.

Although Ferrari was quick to respond to the challenge posed by the turbo era – and took another pair of constructors’ titles – the team’s fortunes ebbed rapidly after Michele Alboreto finished runner-up in the 1985 championship. Their 1986 campaign was a win-less affair: Alboreto came fourth in their 400th race at Detroit.

The 1992 season was one of Ferrari’s worst. Jean Alesi dropped out of the team’s 500th race when his driveshaft failed 14 laps in. Team mate Ivan Capelli took his last points finish in their car, and was cut from the squad before the season’s end. But the real root of the team’s problems was neither Capelli nor the poor F92A chassis, but the management vacuum and political infighting left in the wake of Enzo Ferrari’s death four years earlier.

Six years later, Ferrari had everything in place to conquer Formula One once more. New team chief Jean Todt had assembled his dream team featuring the talents of Ross Brawn, Rory Byrne and, at the wheel, Michael Schumacher.

Even so, things hadn’t come right quite yet, partly due to races like their 600th start at Spa. In a rain-lashed race Schumacher was romping to victory when he clattered into David Coulthard’s McLaren. Ferrari would have to wait one more year for its first championship since 1983.

Ironically, Ferrari concluded their next 100-race landmark without a victory despite having won 61 of the intervening races. The result was a string of six consecutive constructors’ championship titles and, for Schumacher, five drivers’ titles in a row.

There wasn’t much for Ferrari to celebrate in their 800th race. Fernando Alonso forced his way past Vitaly Petrov late in the race to salvage eighth place. However when he found himself in the same position at the season finale in Abu Dhabi Alonso was unable to find a way through, and saw his best chance of a Ferrari championship slip away.

First Red Bull, then Mercedes were the dominating force during Ferrari’s last 100 races. Though Vettel has poached two wins for the Scuderia this year, in their 900th race a tyre blow-out on the penultimate lap cost him a podium finish.

Why did Ferrari miss 27 races?

Ferrari have started 900 of the 927 F1 races so far. So what explains their occasional absences?

There were no Ferraris on the grid for the first world championship race at Silverstone in 1950 where Alfa Romeo were expected to dominate – and did. However at the same track 12 months later Jose Froilan Gonzalez gave Ferrari the first of their 223 wins to date.

Not until the 1980s were teams required to compete in every round of the world championship, and until then it was not unusual for Ferrari to keep its cars away if they were not expected to be competitive: a decision which was often blamed on ‘industrial action’ or something similar.

In 1961 Ferrari’s Phil Hill won the drivers’ championship in the penultimate round at Monza. But what should have been a joyous occasion was overshadowed by the death of his team mate Wolfgang von Trips and 15 spectators in an accident early in the race. Ferrari stayed away from the final round of the championship at Watkins Glen.

The team was struck by tragedy again in 1982, when Gilles Villeneuve was killed during qualifying at Zolder, prompting Ferrari to withdraw the sole remaining car of Didier Pironi.

Michael Schumacher’s towering achievement for Ferrari earned him a special place in the hearts of the Scuderia. He won 72 races for them – more than a third of their victories at the time of his last win at Shanghai in 2006.

He is one of 14 world champions and 24 other drivers to win for Ferrari: