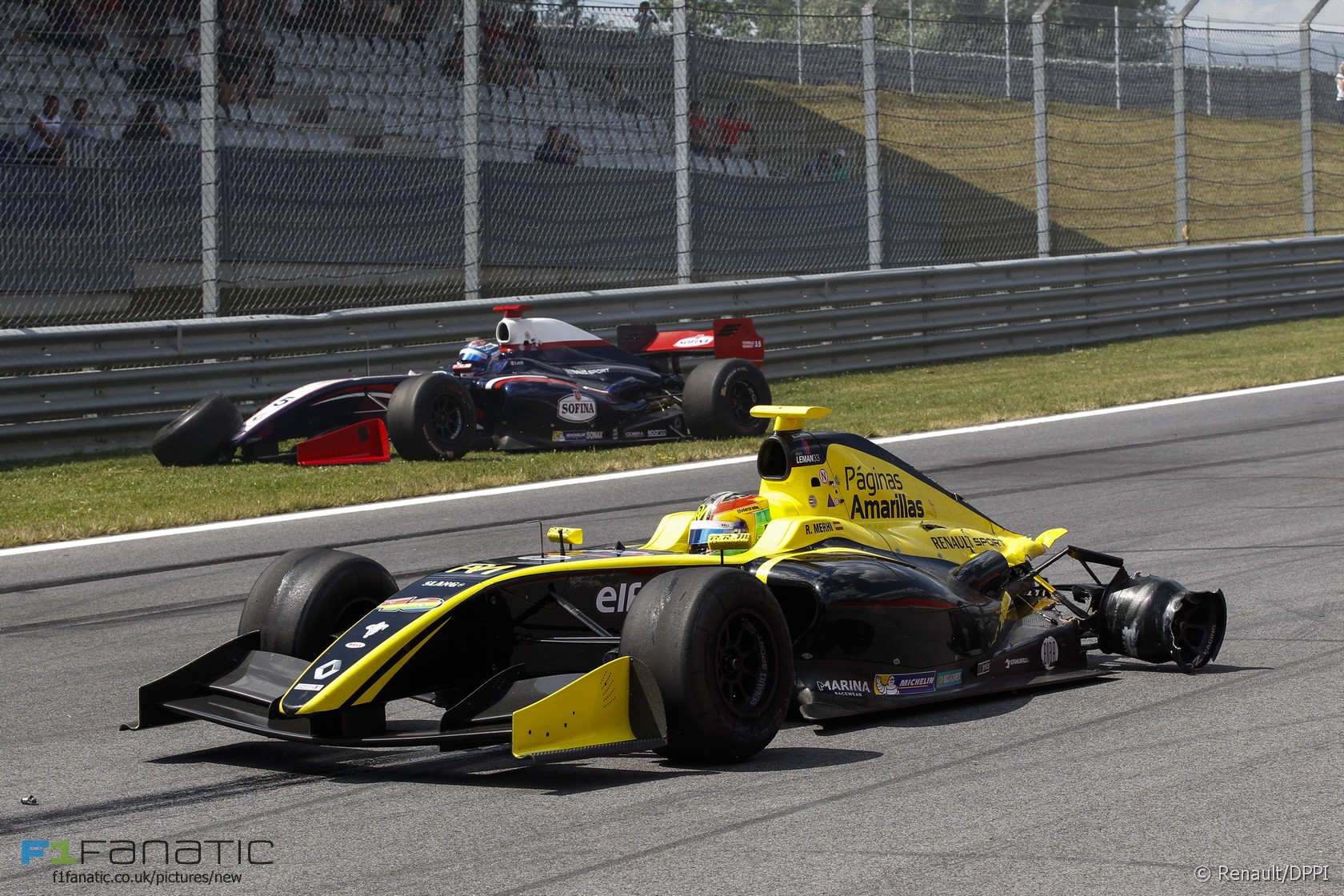 Roberto Merhi was thrown out of the Formula Renault 3.5 double-header at the Red Bull Ring after causing a massive crash at the end of the first race. Manor F1 driver Roberto Merhi looked set for his best weekend of the season so far after putting his Pons car fifth and second on the grid for the two Austrian races. Unusually both races were held on Sunday, bookending a European Le Mans Series race.

However Merhi’s day turned sour when he was given a ten-second time penalty for abusing track limits. This would have dropped him to eleventh from his original finishing position of fourth, but the stewards handed down a much tougher penalty after he triggered a major accident involving Nicholas Latifi.

Immediately after crossing the line Merhi slowed almost to a stop approaching the second position on the grid where he was due to start the afternoon’s race from. Latifi, who was battling with Tom Dillmann as he finished, slammed into the Pons car, launching into a roll (see first video). The stewards accused Merhi of “dangerous” driving and excluded him from both races.

Merhi, who later claimed he had slowed because of a suspension problem he incurred following contact at turn one during the race, described the penalty as “excessive”.

“Watching the video of the accident it’s obvious that when I slow down I move towards the pit wall and the people behind me are quite far away and on the other side of the start finish line,” he said. “There wasn’t any recklessness that would justify such a penalty and the result was all totally by chance, with a series of very bad luck that lead to the accident.”

Mathieu Vaxiviere had fallen to sixth in the first race but converted pole to victory in the second to minimise his points loss to Rowland.

Next round: Silverstone (5th-6th September)

Three different winners shared the spoils in Zandvoort, but none will be happier than Markus Pommer, who picked up his first ever podium and win in the same weekend on different races.

Antonio Giovinazzi won the opening race from pole ahead of fellow title contender Felix Rosenqvist and podium debutant Pommer. Ferrari junior Lance Stroll enjoyed a calmer than usual race to claim fourth ahead of Championship leader Charles Leclerc, which would later prove the Monegasque’s best result of the weekend.

The result of race two was race one reversed, as Rosenqvist won from pole ahead of Giovinazzi, with Jake Dennis taking the final podium spot in third. Meanwhile it was a disastrous race for Leclerc, who retired after a crash caused by damage following an early incident with Stroll, in which the Canadian retired.

Race three looked set to almost be a decider between Rosenqvist and Giovinazzi, with the latter on pole, but both were beaten to the flag by first-time winner Pommer, who made a brilliant move on Giovinazzi at the start to take a lead he never relinquished. After a relatively calm opening two races, race three saw further carnage that has dogged the Championship in the past three events. Matt Solomon and Mikkel Jensen brought out the first two Safety Cars with solo crashes apiece early on, while on lap 11 Gustavo Menezes and Nicolas Pohler collided, triggering the third and final interruption.

Giovinazzi therefore took the championship lead from Leclerc, who only managed tenth in the final race of the weekend. With 12 races remaining 7.5 points separates the pair, with Rosenqvist a further 19.5 behind.

BMW’s sweep of the top five places in race two was a less dominant performance than they managed in the opening event at Zandvoort, where the top seven places were filled by M4s.

On Saturday Marco Wittmann gave BMW their first win in the Netherlands since their DTM comeback. The reigning champion started second, passed pole sitter Augusto Farfus at turn one, and shrugged off pressure from Antonio Felix da Costa also in the closing stages. Maxime Martin ensured the pole sitter did not reach the podium – Farfus crossed the line in fourth, while Bruno Spengler, Timo Glock and Tom Blomqvist completed the BMW sextet.

Having taken his first DTM podium on Saturday, Da Costa went one better on Sunday with a commanding drive to victory from pole position. Farfus, Spengler, Glock and Wittmann followed him home. Championship leader Jamie Green has now gone three races without adding to his tally, allowing Mattias Ekstrom and Pascal Wehrlein to close within five points of him. Despite a strong weekend for BMW their highest driver in the points standings, Spengler, is 29 points adrift.

Jose Maria Lopez was back in charge during race one, winning from pole position. The result was a major shot in the arm for his championship hopes, as Yvan Muller was only able to rise to seventh having qualified ninth.

Tenth on the grid for race one meant Ma started the second race from pole position, and he delivered his first victory of the year after Nicky Catsburg’s heavy impact with the barrier proceedings to an early close.

It had been an eventful race for Catsburg, who tangled with a fast-starting Monteiro on lap one, sending the Honda driver crashing out. That brought the Safety Car out for five laps, and after racing resumed an error by Catsburg allowed Loeb and Michelisz to pounce. Both went either side of the Lada but Loeb was tipped into a spin, crashing out.

Behind Ma, Muller took second place to recover some of the points lost to Lopez, who came in fifth.

Ford’s Mark Winterbottom won the first of two races in Townsville from second on the grid, holding off David Reynolds. Fabian Coulthard took third after pole sitter Chaz Mostert dropped to eighth with a suspension problem.

Winterbottom doubled up the next day after Volvo driver Scott McLaughlin took his first pole position of the season for race two (video above). McLaughlin lost out to Reynolds and Mostert at the start and eventually retired with a power steering fault. Winterbottom moved to second after the pit stops, and took the lead from Reynolds towards the end to take victory and extend his championship lead to 248 points.

Kyle Busch won his second race in three weeks in Kentucky, giving his hopes in the Chase a major boost with only eight races to go until the play-offs begin. He took the lead from Joey Logano with 19 laps remaining and held on to take the win. Logano finished second, with Denny Hamlin, Carl Edwards and Matt Kenseth completing the top five.

No one has won more than two races in IndyCar so far this year and Sebastien Bourdais became the fourth driver to do so after an astute strategy gamble at the Milwaukee Mile. Bourdais avoided pitting when the race was neutralised shortly before half-distance, and made good his escape at the restart before making his pit stop.

Now on fresher tyres than his rivals, at one stage Bourdais lapped the entire field. He took the chequered flag first ahead of Helio Castroneves, who had also gambled on his strategy after qualifying poorly, and Graham Rahal, who made his now customary late-race charge.

Points leader Juan Pablo Montoya took fourth and holds a 54-point lead over Scott Dixon, with Rahal and Castroneves a further 15 behind.

Race highlights not available yet.

The Auto GP double-header at Zandvoort failed to go ahead, the previous round in France having been cancelled to to a lack of entries.

In the first of two weekends in a row without Formula One, did you watch any other motorsports to whet your appetite?

Next weekend’s Racing Wrap will feature Indycar, Super Formula and NASCAR. Are there any other major four-wheeled races taking place you’ll be watching? Let us know in the comments.

Thanks to @mathers for contributing to this article.