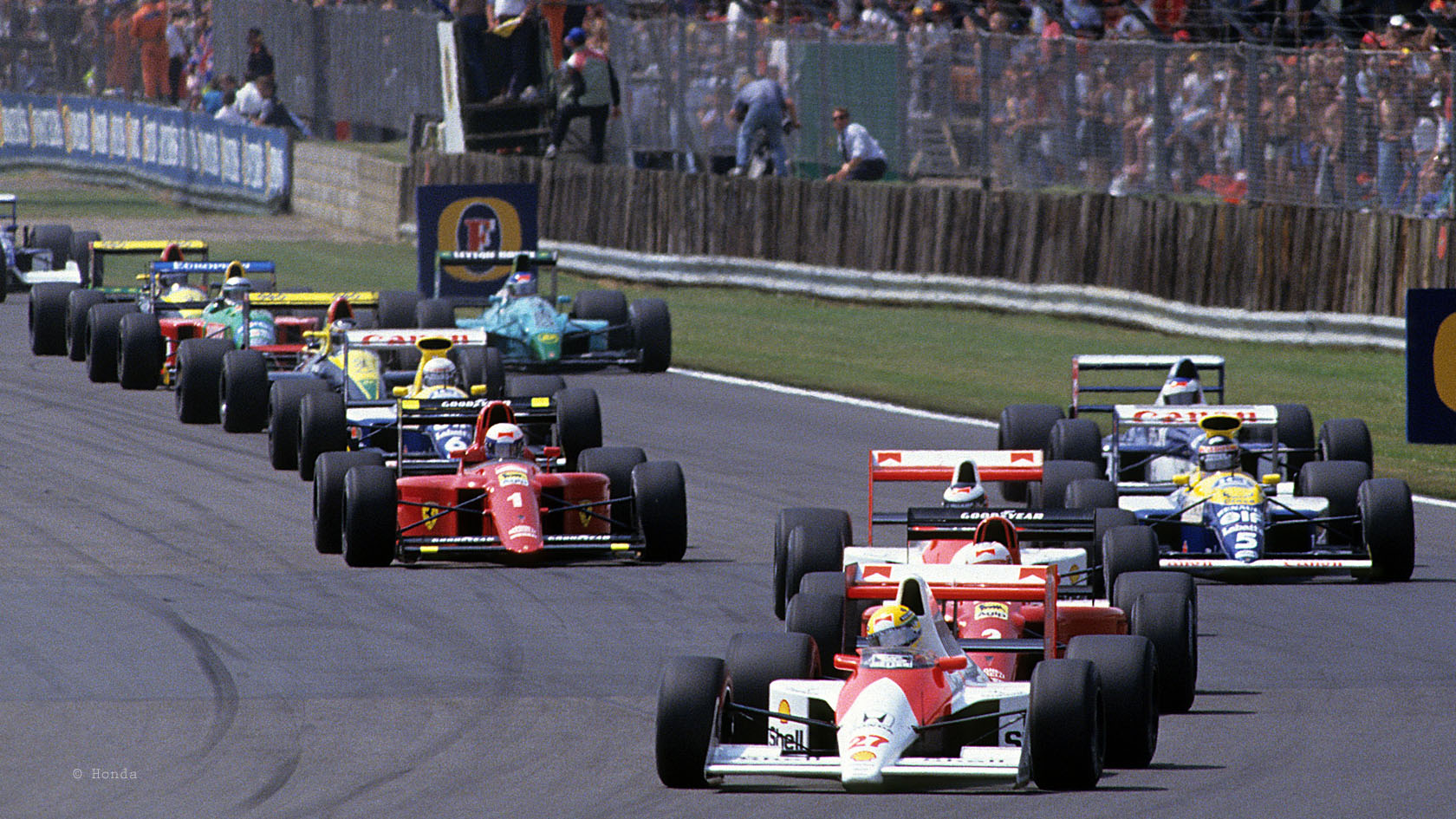 The starting grid has moved several times at Silverstone, and last year’s race was red-flagged within moments of the action beginning.

Here’s a look back at that and some other memorable moments from the race. When Silverstone held the first world championship race in 1950 its start and finish line was before Woodcote corner.

Clark won the race, leading every lap, as he had done in the previous British Grand Prix at Brands Hatch. Fast-forward to the late eighties when the grid still formed up on Woodcote corner with the pole-sitter, in this case Ayrton Senna, on the right-hand side. His McLaren team mate Alain Prost made a better start, but Senna reasserted himself at Copse to take the lead back.

However Senna was doomed to retire from the race with a transmission failure, handing victory to Prost ahead of Nigel Mansell’s Ferrari.

Twelve months later Mansell was on pole but Senna got to Copse before him. This began a tense battle between the pair, and although Mansell eventually got through a gearbox problem later forced him out and, furious, he announced his intention to retire. By the mid-2000s the start line had been repositioned to form a straight grid and pole position had been moved to the left-hand side of the track, on the racing line. This meant a shorter run to Copse corner, reducing the chance of the pole sitter being passed at the start.

It happened in 2005, however. From third on the grid Juan Pablo Montoya got off to a flier, immediately passing Jenson Button and then taking pole sitter Fernando Alonso around the outside of Copse to take the lead, putting him on course for victory.

Despite a sodden track the field formed up for a standing start in 2008. Heikki Kovalainen, starting from his only pole position, got away well but Lewis Hamilton scorched away from fourth on the grid and almost passed his team mate for the lead. Kovalainen clung on around the outside, catching a lurid skid as they exited the corner, but held onto the lead.

It proved only temporary. Hamilton was soon through, and went on to take a crushing win by more than a minute.

It was a chaotic first lap. Mark Webber started from the front row but spun when the cars reached the Hangar straight. It was a desperate first lap for Red Bull as the team’s other car went off with Brooklands along with Sebastian Vettel from junior squad Toro Rosso. Meanwhile at Abbey Felipe Massa, who arrived at the race as the points leader, had his first of several spins.

Two years later the cars lined up on the old start straight for the final time and the tension sizzled between Red Bull team mates Vettel and Webber, who occupied the front row. At the heart of the row was the small-but-significant difference between Vettel’s new front wing and Webber’s old one.

Vettel was beaten to turn one by Webber, but it was fleeting contact with Hamilton that left him with a puncture, ruining his race. Webber took the win, memorably telling the team his efforts had been “not bad for a number two driver” after Vettel had been given the newer wing.

The circuit had been remodelled for the 2010 race but the start/finish line wasn’t relocated until the following year. In a reversal of 2010, Webber headed a Red Bull front row but was passed by Vettel. It was straightforward at the front in 2012 as Alonso led the field away. But Paul di Resta spun off into retirement following contact with Romain Grosjean in the new loop. Hamilton headed the field at the start in 2013, but he would soon be stymied by the first of several tyre failure which affected the race.

From fourth on the grid Webber lost ten places – and much of his front wing – at the first corner. Another team mate reversal as 2013 winner Rosberg led the field from pole position only to drop out with a gearbox problem, opening the door for Hamilton.

However the race was interrupted for almost an hour by a huge crash on the first lap for Kimi Raikkonen. He hit a barrier on the Wellington Straight, showering the track with debris, some of which narrowly missed Max Chilton’s head. This led to a lengthy stoppage while the barrier was replaced.