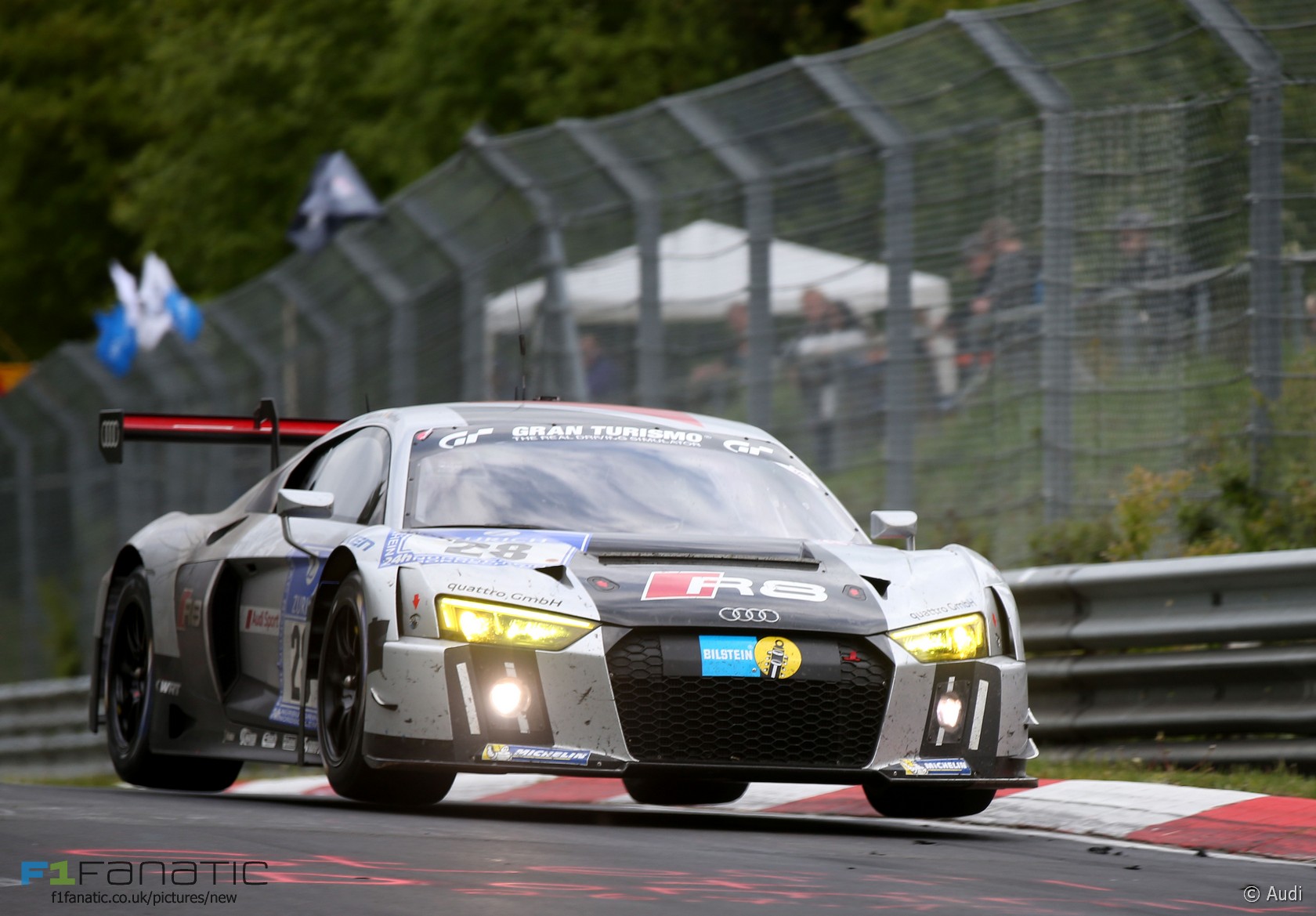 The Nurburgring Nordschleife held its first world championship event for more than three decades on Saturday. The World Touring Car Championship held a pair of three-lap races on the daunting 25.9-kilometre circuit which includes the modern grand prix track.

There was more race action at another classic former grand prix venue in Europe – the Pau street circuit in France, which hosted a trio of European Formula Three races.

But America’s historic Indianapolis oval witnessed a difficult time for the IndyCar championship as a third major crash in the build-up to the Indy 500 forced organised to take steps to slow the cars.

Jose Maria Lopez converted pole position to victory in race one ahead of Citroen team mate Sebastien Loeb. Hugo Valente didn’t make it as far as the actualy Nordschleife – he tangled with Norbert Michelisz and crashed out on the Schumacher S. Guest driver Sabine ‘Queen of the Ring’ Schmitz capitalised, taking a point for tenth place.

The partial reverse grid for race two produced more action but also brutally exposed the straight-line speed deficit of the Hondas, which the Citroen drivers could pass more or less as they pleased on the long straight out of Dottingher Hohe. That was where Yvan Muller took the lead from Tiago Monteiro and, on the final lap, Lopez shot past Monteiro and Gabriele Tarquini as if the Citroen had DRS. The top four crossed the line covered by just seven-tenths of a second.

An increasingly ragged-looking Ma Qing Hua spun in race two and learned about the Nordschleife’s shortage of run-off the hard way. There’ll be no such trouble for him at the next round on the antiseptic Moscow Raceway.

Jake Dennis took his maiden F3 victory in race one and came within five minutes of taking a hat-trick of wins around the narrow confines of Pau. Suspension damage in the final race put paid to those hopes, allowing Antonio Giovinazzi through for his second win.

That made it three podiums out of three for Giovinazzi, who now holds a 15-point lead over Charles Leclerc, who he passed for second at the start of race one. Those positions were reversed in race two, where Leclerc passed Maximilian Gunther following a Safety Car period. Giovinazzi’s subsequent moved on Gunther at Lycee prompted the traditional track-blocking tangle and subsequent red flag.

Gunther made amends with second in the final race for his first F3 podium. Leclerc was left to ponder how much better his results might have been with some better starts, and without the disadvantage of having to qualify in the slower of the two groups at a track where passing is extremely difficult. Ed Carpenter became the third IndyCar driver to wind up with the sky underneath him after another alarming crash during practice for the Indianapolis 500. The series responded by imposing measures designed to keep a lid on speeds – requiring drivers to use their race set-ups for qualifying and reducing engine boost levels. The qualifying points allocation was also scrapped.

What role the new aero kits might have played in the accidents is unclear. There are common factors to all three: each was a single-car crash where the flip happened following contact with all and – perhaps significantly – all involved cars running the Chevrolet aero kit.

The same was also true of the top five qualifiers after Scott Dixon took pole position for Ganassi. He will share the front row with Penshe’s Will Power and Simon Pagenaud. Tony Kanaan and Helio Castroneves – who also flipped in practice – complete an all-Chevrolet top five.

Honda’s highest qualifier is Justin Wilson, the ex-Minardi and Jaguar F1 driver who is out of a full-time IndyCar seat this year. Fellow F1 refugee Sebastien Bourdais is seventh, sharing row three with Marco Andretti and Josef Newgarden – the third driver to have suffered a major crash in the build-up to the race.

Carpenter, who took pole position for the last two Indy 500s, qualified 12th after his car was repaired. Juan Pablo Montoya lines up 15th ahead of last year’s race winner Ryan Hunter-Reay. Tristan Vautier qualified the absent James Davison’s car in 21st – Davison will therefore start it from last place. With 34 entries for a 33-car field there was no room for 1996 race winner Buddy Lazier.

Solberg was lucky to make the final, after jump-starting in his semi-final, resulting in the stewards awarding an extra joker lap penalty. Despite this, he still managed to come second with a storming drive, giving him a spot in the final.

In the European Championship race, it was Jerome Grosset-Janin who took the win in his Peugeot supercar. Fredrik Magnussen won the Touring Car class, and Janis Baumanis took Super 1600 honours.

Next is the British round at the home of rallycross, Lydden Hill next weekend.

What do you get if you cross the Nordschleife with Suzuka? Possibly Finland’s unusual Ahvenisto circuit, which held the first round of the Formula Four NEZ championship.

Local racer Aleksanteri Huovinen won race one and two, fellow Finn Niko Kari the third. The opening race concluded behind the Safety Car after a pair of crashes: Nikita Troitckii pitched Joel Eriksson into a spin, and Niclas Nylund was put onto a barrier by Semen Evstigneev.

The series will support the World Touring Car Championship at Moscow Raceway next.

Thanks to @mathers who contributed to this article as @bradley13 is away.