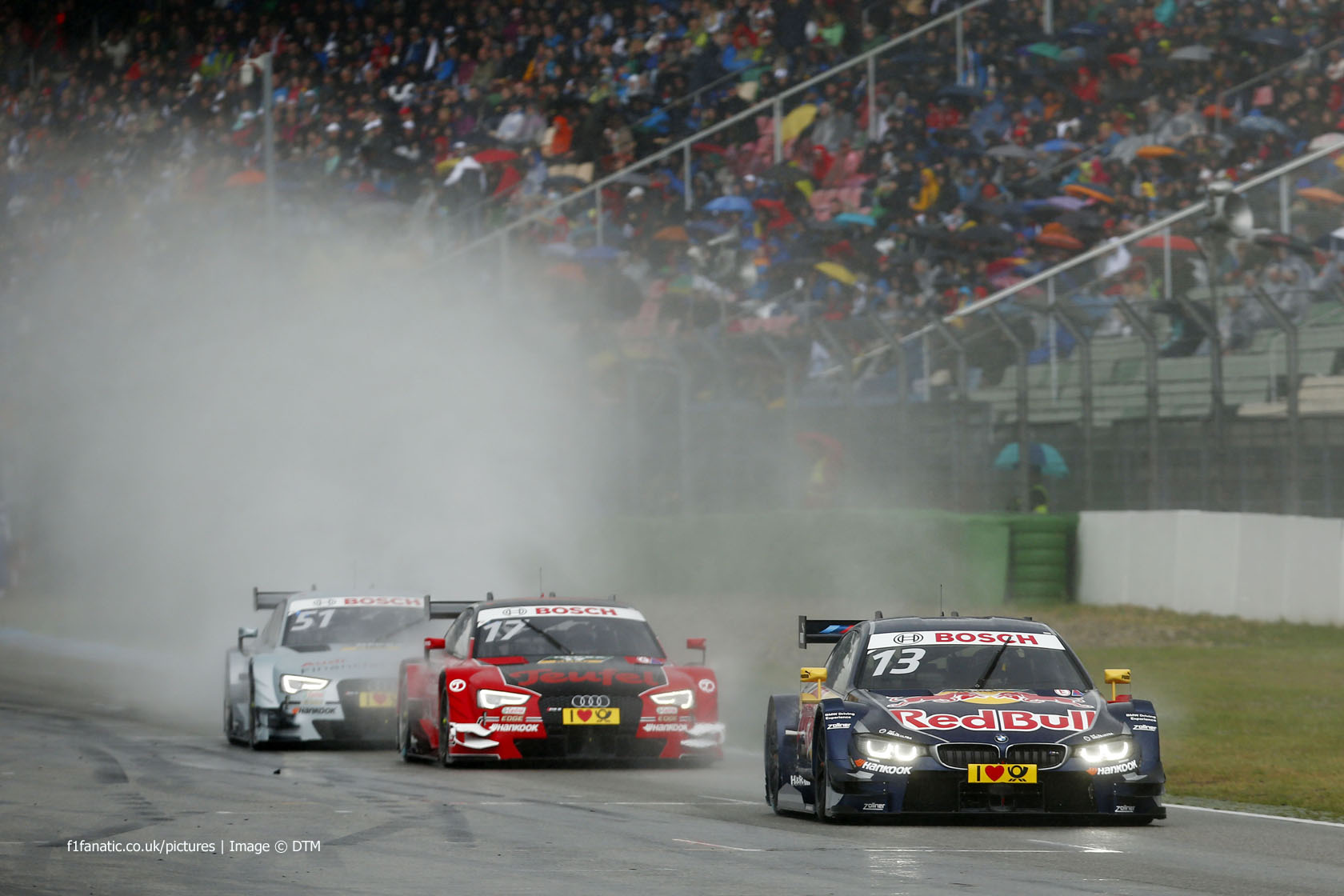 Last weekend’s racing action including a tasty scrap between Porsche and Audi in the World Endurance Championship, rain-inspired DTM and F3 battles at the Hockenheimring, and the usual NASCAR crash-fest at Talladega. Watch highlights of the these and more below.

The Le Mans-spec Audi of Andre Lotterer, Benoit Treluyer and Marcel Fassler made it two wins from two rounds after another enthralling battle with Porsche at Spa. The 919 Hybrid was faster over a single stint during the race, but the R18 was quicker when it came to double-stinting the Michelin tyres, which proved decisive for their cause – the number 18 Porsche of Romain Dumas, Neel Jani and Marc Lieb took the chequered flag just 13 seconds behind after six hours of racing.

Mark Webber’s number 17 car was third. Reigning champions Anthony Davidson and Sebastien Buemi, competing as a duo after co-driver Kazuki Nakajima suffered a back injury in free practice, finished eighth after throttle and electrical problems on their Toyota.

Nico Hulkenberg finished his first WEC event finished three laps down in sixth, the number 19 Porsche losing time early in the race after his team mate Nick Tandy collided with another works Porsche in the GT category. Jota Sport took LMP2 honours while Aston Martin Racing were victorious in GTE Pro and GTE Am.

The weather took a turn for the worse during race two on Sunday (highlights above) and Audi’s Mattias Ekstrom claimed victory in commanding fashion. After starting second the Swede took the lead from Marco Wittmann at the hairpin on the opening lap. Gary Paffett came back brilliantly from a penalty which sent him to the back of the grid for a technical infringement to take the final podium spot with some forceful overtaking moves.

Round two of the DTM is at the Lausitzring at the end of the month.

Antonio Giovinazzi took his first win of the season on Friday, overtaking pole sitter Felix Rosenqvist on the first lap and holding on to the lead in a wet race which was interrupted by the Safety Car on three occasions. Race two on Saturday took place in far better conditions, and Rosenqvist became the first multiple winner of the season after a perfect start, finishing ahead of Charles Leclerc and Giovinazzi.

Race three (full replay above) was the pick of the weekend’s action, as Leclerc won an epic fight with Rosenqvist in wet conditions. After a safety-car restart, the Swedish driver pushed hard to get a 1.5 second gap within three laps. However, Leclerc was right on his tail by lap ten, and on lap twelve looked inside at the hairpin, making slight contact with Rosenqvist’s rear wheel. After getting past in the Mercedes-Arena, the safety car reappeared leaving only two laps for Rosenqvist to respond, which he couldn’t do.

Next up for the F3 drivers is the prestigious Grand Prix of Pau, whose past winners include names as varied as Tazio Nuvolari and Lewis Hamilton.

Hockenheim may not have an F1 race this year but how about DTM, F3 and Rallycross for a bumper ticket of weekend action? The World Rallycross Championship used a short track comprising part of the Motodrom section.

Petter Solberg dominated proceedings and extended his lead at the top of the points table. He topped the intermediate classification on Saturday, and went on to win the first semi-final, giving him pole for the final. From there he led into turn one and didn’t look back, even returning to the lead after taking his joker lap. Last round’s winner, Johan Kristoffersson failed to make the final, having finished fifth in his semi-final.

Solberg didn’t have a monopoly on the action however – watch Tord Linnerud’s astonishing recovery from a turn one spin above.

The third WTCC weekend of the year saw Jose Maria Lopez win race one after a brilliant start from third on the grid, relegating Citroen team mate Yvan Muller to second. Hugo Valente took his second WTCC podium with third.

The partially-reversed grid for race two handed pole position to local hero Norbert Michelisz, who duly romped to a popular victory. Tom Coronel and Tom Chilton took second and third in their ROAL Motorsport Chevrolets, the team’s first double podium since 2008. Sebastien Loeb, Ma Qing Hua and Rob Huff had a first corner collision, the Lada driver retiring with a damaged wheel. Lopez finished sixth behind Loeb, but retains a 34-point lead over his team mate in the championship.

Having abandoned its planned season-opener in Morocoo due to ‘political reasons’, the Auto GP championship finally began in Hungary, though its meagre field of nine hinted at the real reason for the postponement.

In the wet first race on Saturday (above), former GP3 runner-up Facu Regalia took victory ahead of Antonio Pizzonia. The former Williams driver started on pole and led away, but ran wide late on to allow Regalia through to win. Pizzonia made amends in race two, winning despite a late rain shower. Rookie Leonardo Pulcini put in a very impressive in his drive to second place, particularly given the 16-year-old is less than half Pizzonia’s age.

Video highlights not available at present

Which race do you watch expecting to see 27 lead changes, 15 race leaders and a 15-car pile-up? NASCAR at Talladega of course. Dale Earnhardt Jnr won the 500-miler, fending off strong competition from Jimmie Johnson and Paul Menard.

Next up for the drivers is the Kansas Speedway for the Spongebob Squarepants 400. No, really.

The series thundered into the Barbagallo Raceway in Perth with three races following the ‘Super Sprint’ format. On the short, flowing circuit, it was Ford driver Mark Winterbottom who won the first two races from pole, with team-mate Chaz Mostert second in race one and the Red Bull Holden of Jamie Whincup behind in race two.

Race three (above) saw a shock winner, as Will Davison took his Mercedes from seventh on the grid to take victory in the final stages ahead of Craig Lowndes as the tyre strategies took centre stage.

Next up for the V8s is the Winton round in two weeks’ time.

Thanks to @Mathers for contributing article as @bradley13 is away.