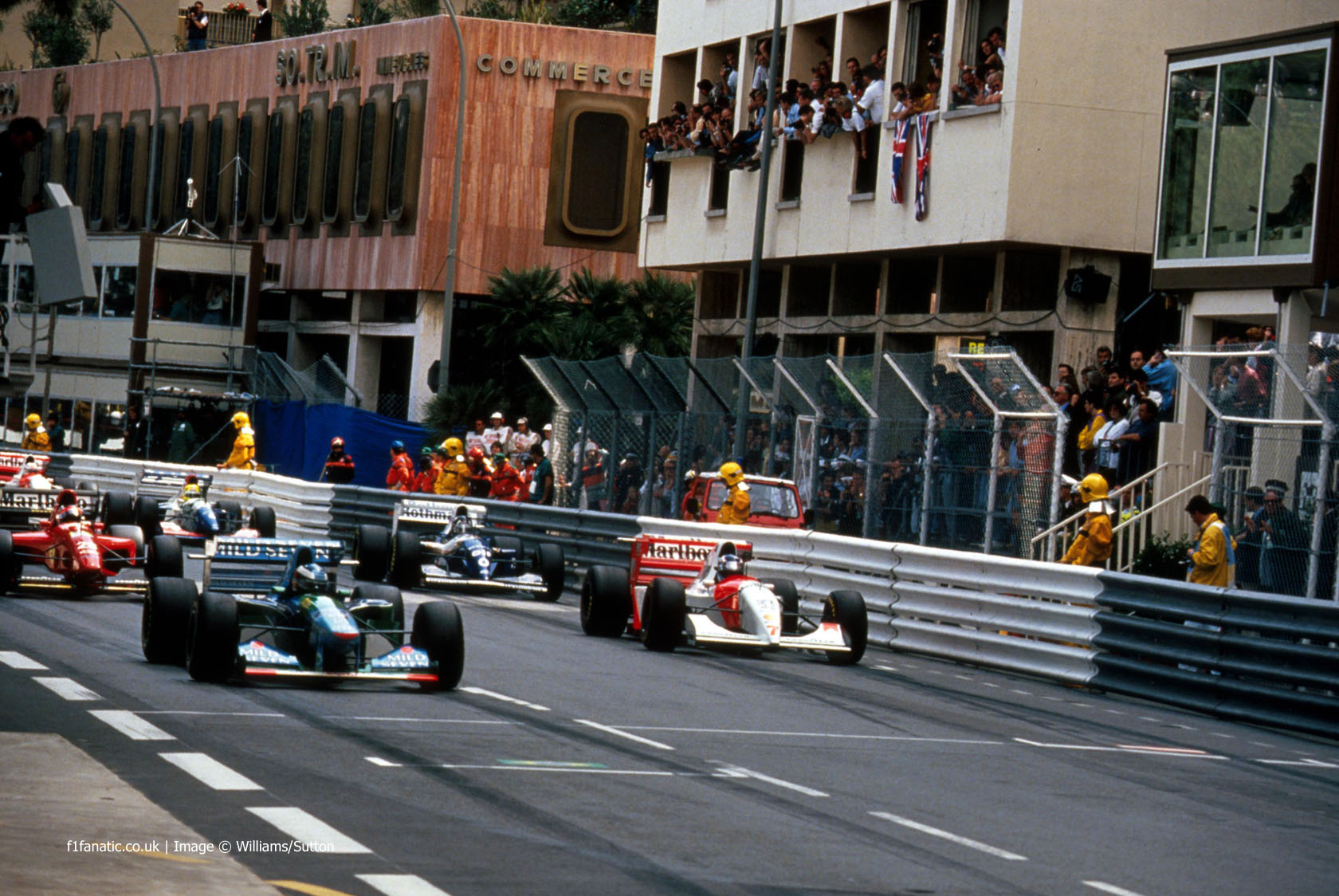 “Look, whether it’s me, whether it’s [Ayrton] Senna, or anyone else, no one is bigger than the sport,” Bernie Ecclestone told Formula One team bosses ahead of the 1994 Monaco Grand Prix.

“We’ve all got to pick ourselves up and go on. Most people thought that we could not go on after Jim Clark was killed, Colin Chapman died, or this or that. Let me tell you, the sport moves on. And it must do so now.”

But the feeling of vulnerability the events of Imola had cast on the sport, and the deep shock at the loss of one of its greatest drivers, would not go away soon.

As profound a shock as the death of Roland Ratzenberger had been on the Saturday of the San Marino Grand Prix, Senna’s death during the race itself was another order of magnitude, and cast a long, dark shadow over the weeks ahead.

Posters for the Monaco Grand Prix showed him in his McLaren at the 1993 race, heading to his fifth win in a row on the track and a record sixth victory in the principality. A Monaco Grand Prix without him seemed unthinkable.

The trauma of the last race, and the media frenzy it had sparked, had barely subsided in the 11 days since Imola. And the risks of driving a Formula One car were starkly apparent at Monaco. That was made terribly clear during the first day of practice on Thursday, which delivered another shock to the system.

The harbour-front chicane had been installed as a safety measure eight years earlier, replacing a high-speed flick which F1 cars had outgrown. This had created some run-off space but it proved insufficient when Karl Wendlinger, pushing his braking limit as deep as he dared, got out of shape and skidded sideways into a barrier.

Wendlinger was taken to hospital with head injuries including bruising of the brain, and though he would go on to make a full recovery the rest of the weekend was conducted in the knowledge that another serious accident had left a driver in a coma.

The FIA had been at pains to avoid a knee-jerk response to the events of Imola. But Wendlinger’s accident seemed to be the final straw.

Just 24 hours after it, president Max Mosley held a press conference to announce the formation of an Expert Advisory Group to look into all matters relating to safety. It was to be chaired by Professor Sid Watkins, and the speed with which the group was assembled can be gauged by the fact that the first Watkins heard about his appointment was when it was announced.

Mosley also announced drastic changes would be unilaterally imposed to slow the cars. These would begin from the very next race, which was just two weeks away. At the German Grand Prix, to be held in July, Mosley demanded the introduction of stepped undersides to F1 cars – a change originally planned for 1995 – to further slow them.

While the necessity of improving the safety of the cars was disputed by no one, designers expressed doubts over whether the planned changes would be successful, and team bosses were alarmed by the potential cost of redesigning cars which had only been in operation for a few months.

The drivers were keen to throw light on safety shortcomings at circuits. The re-formation of the Grand Prix Drivers’ Association had been discussed in the wake of Ratzenberger’s crash, and now following the death of Senna it gained even greater impetus.

At a meeting on Friday, chaired by Martin Brundle, the GPDA was formally re-established. Michael Schumacher, Gerhard Berger and Christian Fittipaldi were named its representatives, with Niki Lauda to act as an official spokesperson for the rest of the year.

Lauda’s presence leant some much-needed gravitas to the GPDA because, for the first time since the 1982 San Marino Grand Prix (which was contested by a depleted field), there were no world champions on the grid.

Barring the sad absences of Senna and Ratzenberger, the entry list was largely unchanged from the previous round. Jean Alesi had returned to his Ferrari, the neck injury he incurred in testing having healed enough for him to drive again.

But following Wendlinger’s crash Sauber elected to take no further part in the weekend and withdrew his entry along with Heinz-Harald Frentzen’s.

For Williams and Simtek, this was an event to endure. Questions of competitiveness took a back seat as both chose not to replace their lost drivers for this race. The front row of the grid was left vacant in honour of Senna and Ratzenberger, and a minute’s silence observed before the start.

The front of the grid provided a glimpse of the future. Michael Schumacher took his first pole position by almost a second from Mika Hakkinen, who started from the leading row for the first time in his F1 career. This was a much-needed boost for McLaren’s new engine supplier Peugeot, who had provided Hakkinen with a developmental engine for the prestigious race.

The nimble Footworks also qualified well. But Rubens Barrichello, injured at Imola and hit especially hard by the loss of Senna, was out-qualified by team mate Andrea de Cesaris, who was serving as substitute for Eddie Irvine for the last of his three suspended races.

Towards the rear of the field were the two Ligiers, the team a hotbed of rumour following its purchase by Flavio Briatore. Behind them were the single Simtek of David Brabham and the two Pacifics, which were well off the pace. The Monaco Grand Prix was one to endure for Williams, and for them the race only lasted half a lap.

From fourth on the grid Damon Hill made, in his view, his first good start of the year. The Williams was immediately past Gerhard Berger’s Ferrari but he got too close to Hakkinen and the pair tangled.

The Williams fired the McLaren into the escape road where a bemused Hakkinen retired. “Whoever it was, I have to say it was really, really stupid,” he said on returning to the pits. Hill tried to continue but parked at the exit of Casino, his suspension damaged.

Behind them Gianni Morbidelli’s Footwork went nose-first into the barrier on the inside after tangling with the Minardi of Pierluigi Martini. They were also eliminated, and both cars were left at the inside of the corner for the remainder of the race.

Thanks to a blistering first lap and the chaos unfolding behind him, Schumacher completed his first tour 3.7 seconds ahead of the Ferraris. They were followed by Christian Fittipaldi – who kept Alesi honest for much of the first stint – Martin Brundle and Mark Blundell.

Schumacher quickly put the race beyond reach of any of his rivals. Within eight laps he was 13 seconds up the road and had already lapped Paul Belmondo, the Pacific driver struggling with the physical effort of hauling his car around the Monte-Carlo track.

A few laps later Schumacher arrived on the tail of another backmarker – his team mate. In his second race since coming back from injury JJ Lehto was struggling with his neck and got nowhere near Schumacher in qualifying where he was over four seconds slower.

Schumacher swiftly put the other B194 a lap down, then spent over a lap waiting for Olivier Beretta to let him through – the Larrousse pilot having failed to notice the Benetton in his rear mirrors had been replaced by the one belonging to the race leader.

One of few changes made immediately after the Imola accidents was the introduction of an 80kph (50mph) speed limit in the pit lane, with tight corners added at the entrance and exit to further slow the cars. Schumacher dodged through them for the first time on lap 24 when he came in to refuel. With Berger following him in shortly afterwards, also on a two-drop strategy, Schumacher never lost the lead.

But he nearly did on lap 42, when the Yamaha engine in Blundell’s Tyrrell expired in front of him and coated the approach to Sainte Devote in oil. The rear of Schumacher’s car broke away as he reached the apex of the corner and for a moment he looked to be heading into the barriers until the grip mercifully returned and he continued on his car.

Berger was next on the scene. “I saw the yellow flag, but I saw too late the oil flag and I just was sliding on the oil,” he explained afterwards. He abandoned his attempt to get around the corner and headed for the escape road. He had just executed a 180-degree spin and rejoined the track when Brundle arrived.

Like Berger, the McLaren driver was on a two-stop strategy. He had made his first stop early and moved clear of Fittipaldi, and now seized his chance to pass Berger. The Ferrari driver covered the inside line on the approach to Mirabeau but Brundle went the long way around to claim second place.

“Martin was just behind me but I had very dirty tyres,” said Berger. “I didn’t want to risk anything for this lap.” His attempt to catch the McLaren was hampered when he caught former team mate Michele Alboreto, who took his time letting the Ferrari past.

The other Ferrari was also having trouble in traffic. Alesi made a hasty attempt to lap Brabham at the chicane, the outcome of which was broken suspension and retirement for the Simtek and a damaged front wing for the Ferrari.

On the same lap Fittipaldi’s fine drive was halted by gearbox failure. The prime benefactor was De Cesaris, who jumped up the order to take fourth place.

Schumacher eased his pace over the final laps which allowed Lehto to reclaim one of his two lost laps and gave him the opportunity to seize on any last-lap problems for the drivers ahead. But none appeared, and Lehto finished out of the points in seventh.

Brundle took a well-earned second place, though his and Peugeot’s delight was tempered when McLaren team boss Ron Dennis reminded them that although this was their best result so far, “second place just means you’re first of the losers”.

Berger had questioned his future in racing after losing his friend Senna, compatriot Ratzenberger and seen another Austrian, Wendlinger, badly injured. He had bravely chosen to continue and third place was far less a reward than his commitment merited.

De Cesaris claimed valuable points for Jordan, while Barrichello retired when his engine died during his first pit stop. Alesi and Alboreto took the final points. Pedro Lamy was the last driver running, albeit five laps down having pitted twice to have his brake fluid topped up.

Schumacher’s fourth victory in as many races left little room for hope that he might be challenged for the championship. He now had 40 points with Berger, his closest challenger, 30 behind.

But the sport had more serious concerns in the weeks and months ahead than the lack of excitement in the title fight. Despite relief that qualifying and the race in Monaco had passed without incident, the question of how F1 could be made safer now demanded immediate attention.