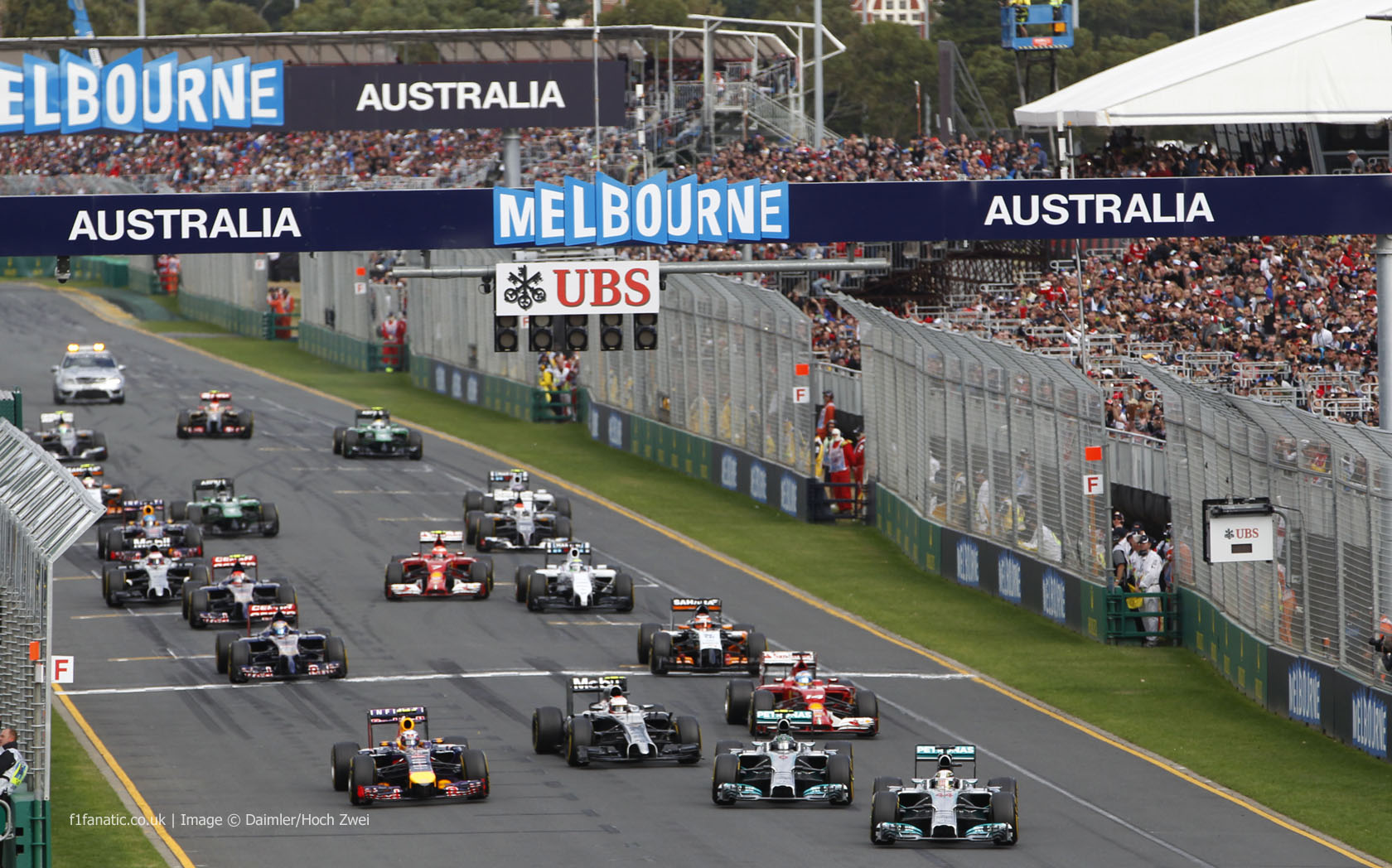 When F1’s 22 drivers revved their V6 turbo engines for the first start of the season in Melbourne three days ago, not everyone was impressed with what they heard.

Among them was Bernie Ecclestone, who wasted no time in telling anyone with a microphone that these engines, which he’s hated all along, are wrong for Formula One.

It’s no surprise Ecclestone should find himself underwhelmed by the first flying start with the new engine formula, because he wasn’t there to hear it. Twenty-odd V6 turbo engines will sound a little gutless to you if you’re in a different continent.

Australian Grand Prix promoter Ron Walker, who can usually be relied upon to toe the Ecclestone party line, also chimed in. Walker’s widely-reported comments to The Age about the race being “not what be paid for” need to be seen in that context, as well as the fact that the Australian Grand Prix’s contract is up for renewal next year.

With Ecclestone already talking about making changes to the engines to alter the acoustics within the next few races, a bit of perspective on the new sound is needed.

How concerned are F1 fans about the noise made by the new engines? An F1 Fanatic poll of 700 readers conducted during the weekend showed a mix of views with the balance of opinion towards the positive:

The majority of fans appear not to be unduly concerned by the noise but a significant minority (30%) aren’t happy with what they’re hearing. This tells us there’s more right than wrong about the sound of the new engines, and though there is scope for improvement F1 should ensure any alteration is a change for the better, and prioritise that over acting hastily.

Leaving aside the question of whether anything can be done immediately, as the specifications of this year’s engines were homologated last month, there are huge potential downsides to making sudden, ill-considered changes to the engine. Tweaking the exhausts to increase the noise, for example, could seriously alter the performance and economy of the designs, with obvious consequences for each team’s competitiveness. And having only just digested an enormous rise in engine development costs, F1 badly needs stability in its regulations to allow the cost of engines to fall and relieve the pressure on its smallest teams.

There’s no doubting the new engines are quieter than the old ones. The FIA says the noise level has fallen from 145 decibels to 134, which at close quarters is still above the threshold of pain.

However as Ecclestone banished all but the wealthiest of fans from F1 paddocks three decades ago, few get that close. And if the blast of engine noise seemed underwhelming at Melbourne, a temporary venue where spectators can get fairly close to the action, it’s going to be even less at vast expanses like Bahrain and Shanghai.

But sheer volume alone isn’t everything, a point made by many readers in their responses to the poll above. Though quieter, each of the new engines offer distinctively different sounds, which the bland V8s didn’t. They also allow fans at the track to hear other sounds – the screech of tyres locking and, usefully, the commentary on the public address system.

We also need to see the change in engine noise in its wider context. Formula One is not the only racing series embracing smaller-capacity turbo engines to stay in step with the needs of road car manufacturers. And noise pollution regulations are an increasing problem for some circuits, something quieter racing cars could help to address.

As Ecclestone’s naked hostility to the new engine technology even extends to trashing his own sport in the press at the first race weekend of the new season, you have to wonder how hard his broadcasting company are trying to make the engines sound good as they can on television.

But by urging a rush to change the engines F1 risks making hasty, expensive and potentially controversial alterations which could cause more problems than they fix. Knee-jerk reactions like this usually cause the sport’s biggest changes for the worst.

F1 should take time to see how the public’s attitude to the engines develops, see if it is reflected in ticket sales and viewing figures, and make considered changes based on gathered data.

In the meantime its top priority should be to correct past knee-jerk mistakes – those which F1 fans have unequivocal views about: