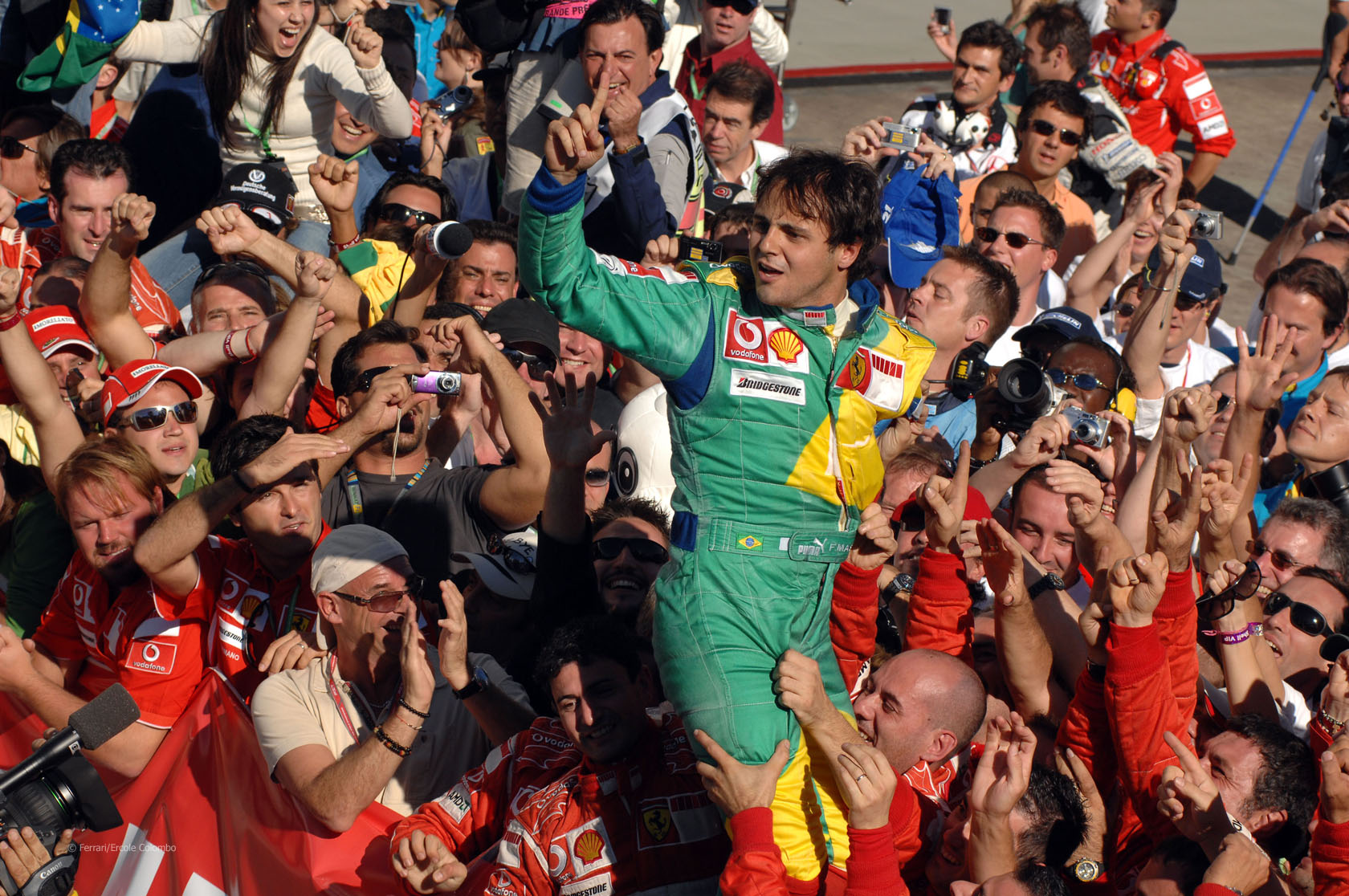 Felipe Massa has left Ferrari having been one of the most loyal drivers a team has ever known.

Only Michael Schumacher started more races for the great Italian team, and just one other driver – David Coulthard – made more grand prix starts for a single constructor.

Massa’s 139 races with Ferrari yielded 15 pole positions and 11 victories. And it very nearly brought him a world championship in 2008, when Lewis Hamilton snatched it from him after Massa won an electrifying showdown at his home track in Interlagos.

That race remains Massa’s last triumph to date. Since his 2009 crash he has struggled to recapture the highs of his first three seasons with Ferrari.

Here’s a look back on Massa’s eight years racing for Ferrari in pictures. Massa had spent three seasons with Sauber when he was promoted to Ferrari’s race team as a replacement for Rubens Barrichello.

Sharing a team with Michael Schumacher, Massa struggled initially but a strong second half of the year saw him take a breakthrough victory at Istanbul and a popular home win at the final round. Another home win should have followed in 2007. But by that stage Massa had fallen out of contention for the world championship and new team mate Kimi Raikkonen needed a victory in Brazil to clinch the crown. Massa obliged, making way for his team mate.

Massa won two of the opening four rounds and scored another win in Turkey, helping Ferrari reclaim the constructors’ championship. In what Massa’s most impressive season to date he remained in the hunt for the world championship until the chequered flag fell on the finale in Sao Paulo. He won at home again but Hamilton’s last-lap pass on Timo Glock meant it wasn’t enough for Massa to take the title.

Nonetheless six wins for Massa underlined his credentials as one of the sport’s top drivers. He was hard done by in Hungary as well, losing a likely victory in the closing stages due to an engine failure.

The 2009 Hungarian Grand Prix marked a turning point in Massa’s career. He suffered life-threatening injuries to his head when a spring fell off Barrichello’s car and struck his helmet during qualifying.

It ruled Massa out of competition for the rest of the season but he was fortunate to escape with his life. He returned to the paddock before the end of the year, waving the chequered flag at his home race, and shortly afterwards began testing for his 2010 return.

From 2010 the arrival of twice-champion Fernando Alonso made Ferrari a more challenging environment for Massa. And though he has always said his 2009 injuries have not affected his driving, he rarely got on terms with Alonso the way he did with Raikkonen.

Massa was denied a chance to win on the first anniversary of his accident at the Hockenheimring when Ferrari told him to let Alonso past with the infamous words “Fernando is faster than you”. He hasn’t come close to winning again since.

Ferrari were seldom in the hunt for wins with their 2011 challenger – Alonso took a single victory at Silverstone. But he was able to finish on the podium ten times, something Massa never managed once, though a succession of collisions with Hamilton didn’t help matters. The story remained much the same for most of 2012 as Massa struggled more than Alonso with an even less competitive Ferrari. Finally in Japan he ended his podium drought – the longest ever suffered by a Ferrari driver – and he was given another one-year extension on his contract. Although his 2013 campaign was marginally better than 2012, it wasn’t enough to persuade Ferrari to retain him for another season. Following the Italian Grand Prix he confirmed he was leaving the team, with Raikkonen making a surprising return in his place.

He signed off in emotional style at his home grand prix, but the race itself was a disappointment as a mid-race drive-through penalty ended his chance of finishing on the podium.

Share your memories of Massa’s eight seasons driving for Ferrari in the comments.