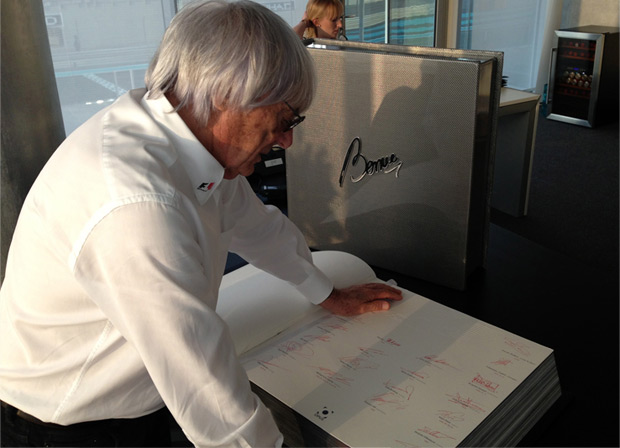 In addition to the book the buyer will receive Paddock Club access to every race on the 2014 F1 calendar plus an “informal meeting” and a “cup of tea” with Bernie Ecclestone at every race.

The publishers are promoting the book as a chance to “get to know the man behind Formula One” and add “at a grand prix venue, to be arranged, you will be invited to a private dinner with Mr Ecclestone”.

The buyer will also be given paddock access as well as entry to the pits along with three guests “during specified periods”. Entry to special F1 events such as the FIA ball will also be included with the book.

The F1 Opus: Bernie Edition is a one-of-a-kind pressing with a silver cover plate bearing the signatures of Ecclestone and the 22 living Formula One drivers’ champions.

If you’re interested in bidding for the book and can stomach a seven-figure guide, price, head to the official site for more information. If your budget is slightly less extravagant than that the 2013 F1 Fanatic Gift Guide is for you.