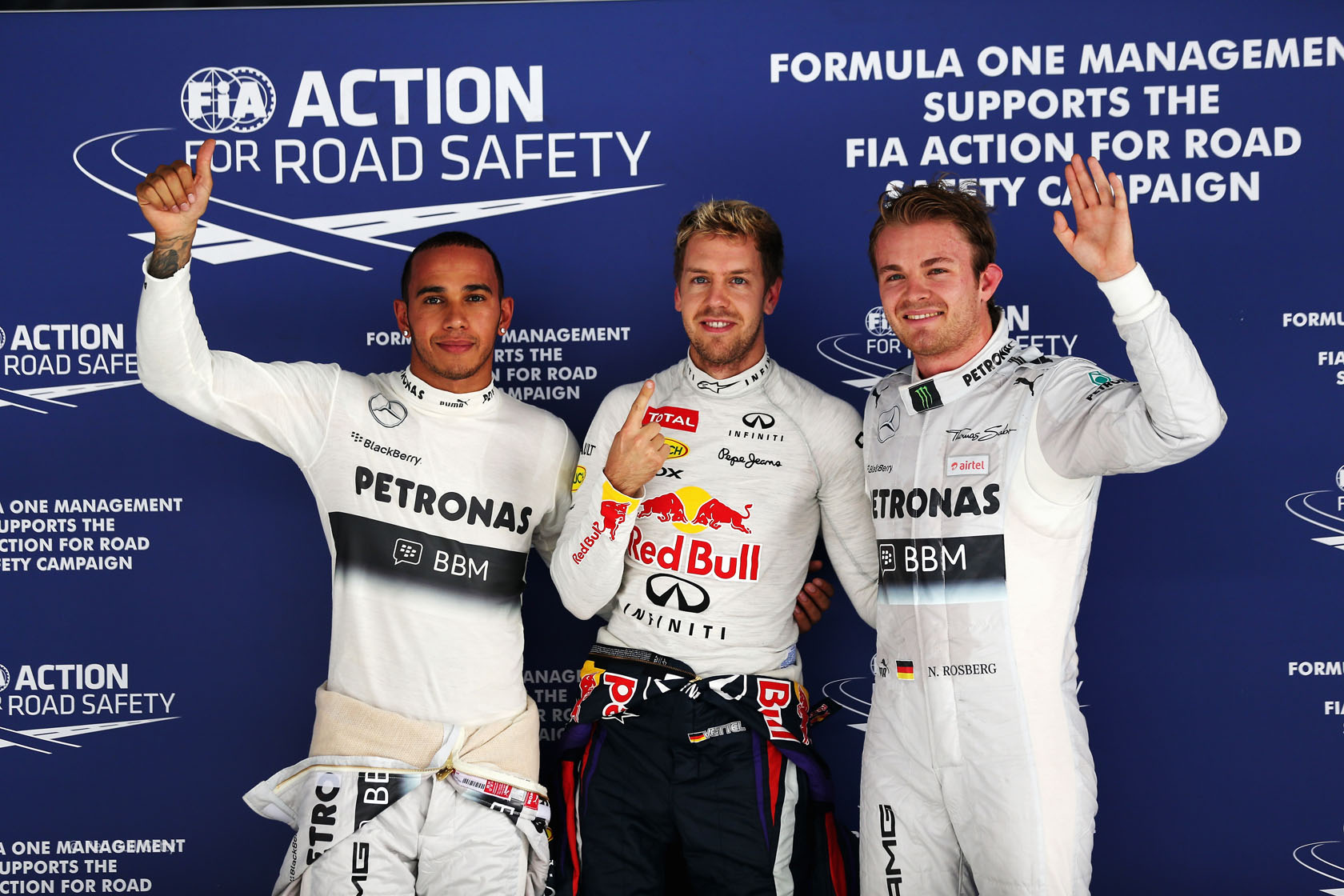 Sebastian Vettel maintained his record of starting every Indian Grand Prix from pole position as he claimed his seventh of the year.

Vettel beat his 2011 track record at the Buddh International Circuit by 59 hundredths of a second as he comfortably saw off his rivals.

The Mercedes pair start behind him on the grid but were over seven tenths of a second slower than Vettel’s flying Red Bull.

The combination of rapidly improving track conditions and a significant gap in performance between the soft and medium tyres presented teams with some difficult decisions in Q1. In the end, only two drivers tried to make it through the first phase of qualifying without using the soft tyres.

Mercedes predicted a cut-off time for Q1 of 1’26.5 and Vettel beat that by six tenths of a second on his medium tyres. But Romain Grosjean, who has used similar tactics to good effect in recent races, was not able to pull it off this time.

The Lotus driver lost time on his final run, blaming traffic, and slipped to 17th place as Felipe Massa posted a late improvement in his Ferrari, leaving him to watch the rest of the session from the pits.

Pastor Maldonado also failed to make the cut for Q2 along with the Marussias and Caterhams as usual.

Vettel switched to the soft tyres for Q2 and improved his time by 1.4 seconds. Fernando Alonso managed to split the Red Bulls with a lap three-tenths of a second slower than Vettel’s.

Mark Webber had a scruffy lap, running well off the track at turn nine. But according to team principal Christian Horner he didn’t gain time by doing so, and race director Charlie Whiting let the time stand.

The Force India drivers were separated by less than three hundredths of a second but failed to make the final ten at their home event. Nico Hulkenberg was the only Sauber driver to reach the final ten as Esteban Gutierrez was almost a full second off his team mate.

The final part of qualifying presented teams with the question of which tyres to start the race with. Red Bull and Ferrari both elected to split the strategies between their drivers.

Vettel’s soft tyre run was his usual tour de force – rapid and accurate, he covered the lap in 1’24.119, beating his previous course record for the Buddh International Circuit.

As in Singapore, it seemed he didn’t need to make a final run, but he did go out again on the soft tyres. Lewis Hamilton caught the Red Bull driver at the fast turn eight/nine chicane and said on the radio he was held up.

Nonetheless Hamilton took third on the grid behind team mate Nico Rosberg, both using soft tyres. Behind them Webber took ‘medium tyre pole’, half a second slower than his team mate.

Choosing the medium tyres turned out to be a major sacrifice for Alonso. His Q2 time on soft tyres would have been good enough for third in Q3, just 14 thousandths of a second slower than Rosberg. With track evolution, a front row start may have been in the offing.

Instead he took eighth behind Massa, Kimi Raikkonen and Nico Hulkenberg, all of which were on soft tyres. The medium-tyred McLarens share row five, Perez ahead of Button.