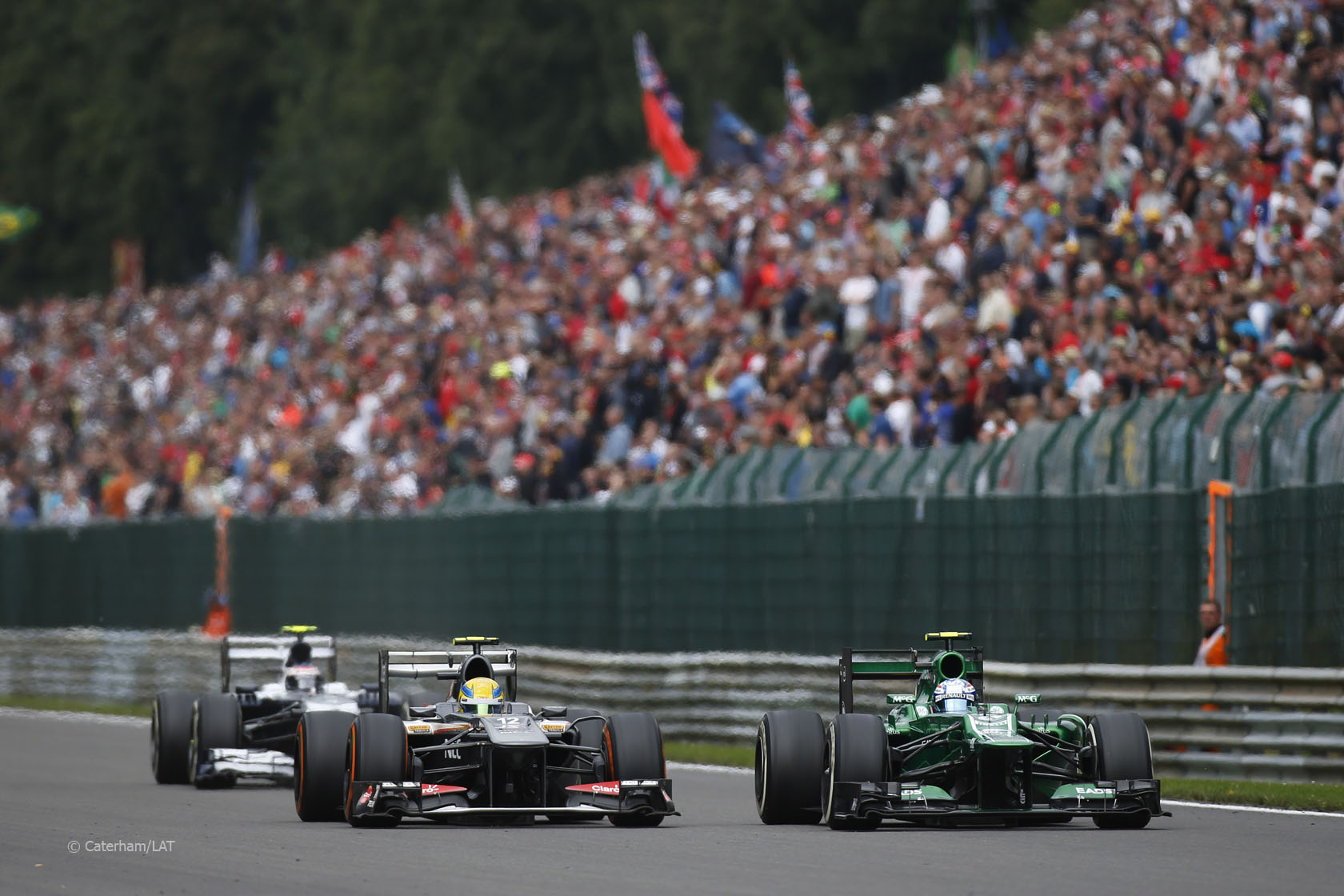 The Drag Reduction System was introduced to Formula one 50 races ago. But we shouldn’t necessarily think of it as something that was imposed on the sport.

Imagine, for a moment, that moveable aerodynamics had never been banned. I find it fascinating to consider how moving wings might look after more than four decades of development. Would slender cars slip like darts down the straight before blooming with wings to maximise downforce as they reach a braking zone?

At a push, I could perhaps persuade myself that had F1 car evolution been untouched by the rule makers, a kind of ‘natural DRS’ could have developed. Drivers might have such control over their cars’ wings that they could ‘turn up the downforce’ in corners to counteract the turbulence produced by a car in front. Of course, the leading driver would have had just as much control over their own wings to fight back.

We never got the chance to see what might have been. Instead we have DRS: a bastardised version of the moveable aerodynamics concept in which the chasing driver is given a huge straight-line speed boost which the leading driver is denied. This gimmick has diminished the art of real racing and traded it for the cheap facsimile of push-button passing.

That DRS would compromise the integrity of F1 racing was obvious from the moment it was announced. The first reader to comment on the first article about DRS on F1 Fanatic realised as much:

I would like to see overtaking in F1 but from driver skill, not one driver lucking out because of a adjustment to their rear wing when their rival can’t.
@Fordsrule

Three years on, the viewpoint has been completely vindicated. DRS’s contribution to the stated aim of increasing overtaking has largely been achieved by making it too easy.

Another change introduced to Formula One the same year DRS arrived has played a more important role in increasing overtaking and has done so without the patent unfairness and artificiality of DRS.

The most significant contributor to increased overtaking in the last 50 races has been the variation in tyre performance between cars. That has come about because of the more aggressive tyre compounds which Pirelli were asked to supply from 2011.

Again, this much was clear soon after the change had been implemented. Rubens Barrichello, Formula One’s most experienced driver of all time and therefore well-placed to comment, said in 2011: “All the overtaking taking place this year is more to do with the tyres than the actual DRS.”

Tyre degradation, he argued, created the opportunity for overtaking in the first place: “The DRS only comes into play because of the tyres.”

Outside of the DRS zones tyre degradation has created the circumstances for some spectacular passes which have showcased driving of the highest calibre, such as Mark Webber’s celebrated move on Fernando Alonso during the Belgian Grand Prix two years ago:

But when a driver makes a pass on a rival in a DRS zone there is little more skill to behold than a driver pressing a button. Is this really what we are to expect from the supposed pinnacle of motor racing?

In the early days of DRS there was much talk of the necessity to ‘fine tune’ the system so that passing would never be too easy or too hard. After 50 races this has proved a vain and unrealistic hope. DRS may occasionally allow two drivers to head into a braking zone side-by-side but more often than not one will blast past the other on a straight with all the drama of a sportscar passing a tractor on a dual carriageway.

The ‘DRS sweet spot’ is a fallacy. Given the variation in performance between cars in terms of drag and straight-line speed, differences in how efficiently each team’s DRS operates and how car performance varies during a race, it is and will always be impossible for the rule makers to make DRS work the way they’d hoped.

It was clear during Sunday’s race that hopes of hitting the ‘DRS sweet spot’ are as far from being realised now as they were at the beginning of 2011. While some cars were able to blast past their rivals in DRS zones with no difficulty, others gained little advantage. In the closing stages of the race the variation in tyre strategy gave us two interesting battles to look out for: the two-stopping Felipe Massa and Daniel Ricciardo were respectively catching Romain Grosjean and Sergio Perez.

In both cases the outcome was inevitable. There was no tension, no battle and no doubt the driver with the benefit of DRS would get ahead. This is not motor racing.

Today the concept of a battle for position only exists outside of DRS zones. In Canada Lewis Hamilton fought to repel Fernando Alonso until the pair arrived at the DRS detection line – whereupon both tried to slow down to be the second man across it to gain the benefit of an easy DRS pass.

This year has seen a rise in the encroachment of DRS zones on F1 tracks. The number of DRS zones has more than doubled with a correspondingly poor effect on the racing.

Depressingly, the DRS contagion has infected other motor sports as well, such as the DTM. But other series show how F1 could retain the technology and ditch the artificiality.

In Formula Renault 3.5, drivers may use DRS for a set amount of time per race, allowing them to use it to attack or defend. Giving the leading driver equal opportunity to use DRS defensively would obviously make it more acceptable. Surveys on this site have shown most fans preferred that solution both before and after DRS was introduced.

As F1 increasingly fails to fulfil my appetite for real racing, DRS-free series like IndyCar and GP2 have become more attractive to me. Though not without flaws, they at least realise that just because one driver has closed to within a second of his rival shouldn’t earn him the right to jab a button and blast past easily.

It was a GP2 driver, free of his F1 peers’ obligation to only make positive comments about the sport, who best articulated how DRS overtaking is a matter of quantity over quality: “I stayed to watch some of the F1 on Sunday but left halfway through to beat the traffic back to Calais,” said Jolyon Palmer.

“I don’t think I missed much in the race though, most of the passes were done on the straight using DRS, instead of through exciting GP2 style race craft, and I don’t find that at all entertaining to watch.

“DRS on tracks like Spa isn’t good for racing and it sums it up when Hamilton let Fernando Alonso pass him on purpose at La Source just so he could have DRS up the hill out of Eau Rouge. On some tracks DRS can be helpful but I think with Pirelli tyres you don’t always need DRS to improve the racing.”

I agree with every word of that, but above all this: “I would much rather see fewer overtakes but more wheel-to-wheel scrapping and drivers having to work harder to overtake.”

Great overtaking moves are part of what makes motor racing special. Moments like Dijon ’79 and Mexico ’90 stand out in our memories for their sheer drama. Today these moments can only exist outside of DRS zones. And, as with Webber’s heroic pass on Alonso, we know the next DRS zone can immediately erase a hard-won advantage.

After 50 races, I’m done giving DRS the benefit of the doubt. There has been enough time to field-test and fine-tune it and I have no confidence it’s ever going to produce anything better than a sham parody of motor racing.

I profoundly hope DRS isn’t here to stay. I’m afraid it probably is.