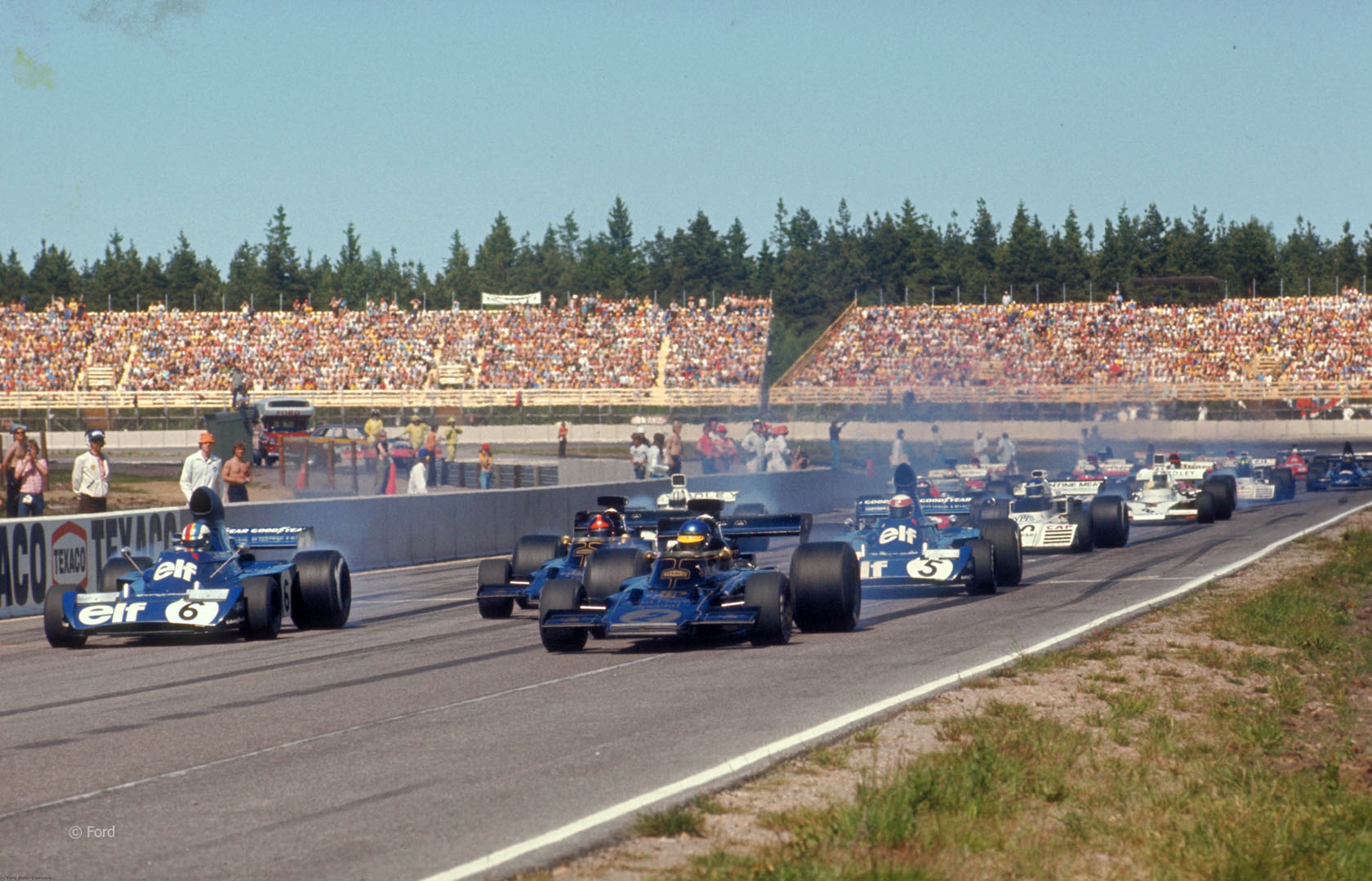 The first ever Swedish Grand Prix, held on this day 40 years, very nearly had a fairytale finish.

Over 50,000 spectators turned up at Anderstorp to see if Ronnie Peterson would score his overdue first grand prix victory – and do so at his first home race.

He led every lap of the way but as he took to the main straight for the final time a rival was looming large in his mirrors and poised to spoil the party.

Lotus had dominated the 1972 season. Emerson Fittipaldi’s haul of 61 points was sufficient to make him the youngest-ever drivers’ champion and to deliver the constructors’ championship for his team.

That was fortunate, because his team mate Dave Walker had contributed nothing to Lotus’s points haul. Acknowledging the need to field a stronger line-up, Colin Chapman hired Peterson to partner Fittipaldi in 1973.

Rival team principal Bernie Ecclestone was working on more than just driver line-ups. He had also taken an active role in promoting F1 races, and added home races for both Fittipaldi and Peterson to the 1973 calendar. Fittipaldi had delivered for his fans in Brazil and the prospect of Peterson doing the same at home was strongly anticipated.

The Scandinavian Raceway at Anderstorp was built on the site of an airfield, using the former runway for a long, wide back straight.

Unusually its start and finish lines were at separate points on the track. The Commission Sportive Internationale (fore-runner to the FIA), who had inspected the circuit five years earlier, decided the start line must be on a longer straight than the one chosen by the race organisers, where the pits had already been built.

Jackie Stewart found the latest addition to the calendar easy to learn but challenging to master. “It’s quite a difficult circuit to drive quickly,” he said.

“It looks very simple and in fact you can go round moderately quickly without a great deal of trouble, a couple of seconds off a fast time is a doddle, it really is easy. But getting down to the fast time, the sort of pole position time is another question.”

In the timing centre, located at the finishing line, the organisers had obtained a cutting-edge piece of apparatus as Denis Jenkinson recalled in MotorSport’s race report:

“The timekeepers were using a clever computer to produce results and it was programmed merely to remember and record each car’s best lap and then to discard any slower ones, so that it threw away all the times that showed no improvement on the ‘remembered’ time, which left us with only the cumulative best time for each driver, along with the cumulative number of laps each driver had completed.”

“He’s Swedish, you must stretch it by a lap…”

Peterson was the driver to beat throughout practice during which Chapman used every available means to ensure he got the maximum track time. As Peterson prepared to head out late in one session he urged a steward: “One more lap for Ronnie, please. He’s Swedish, you must stretch it by a lap or two…”

Francois Cevert came close to taking pole position but it went to Peterson by less than a tenth of a second. Their world champion team mates lined up on the second row, Stewart and Fittipaldi each having won three of the preceding six races.

Denny Hulme qualified the new McLaren M23 on the third row of the grid. Ferrari were enduring a miserable year and only sent a single entry for Jacky Ickx, leaving Aruto Merzario without a drive. Later in the year they missed two races while they tried to sort out the problems with their 312B3.

Having made their F1 debut in the previous round at Monaco, Hesketh and driver James Hunt skipped the Swedish race.

Another driver who was not present was Nanni Galli, who called time on his career with Frank Williams’ Iso Marlboro squad. Danish driver Tom Belso was given the chance to drive his car in practice but did not start the race. The Swedish fans had to wait a little longer than expected for their first glimpse of F1 action. The race was due to start at half past one in the afternoon but was delayed due to an argument over the positioning of photographers near the first corner. Denny Hulme led the Grand Prix Drivers’ Association’s attempt to have them moved to a safer place.

Once that was taken care of the formation lap began. Reine Wisell, the other Swedish driver in the field, pulled off with broken front-left suspension on his bright yellow March before he could take the start.

Peterson made a tyre-smoking start while Fittipaldi blasted the other Lotus up to second place. The two Tyrrells, Cevert leading Stewart, took up the pursuit.

Graham Hill went off at the first corner and although he continued his Shadow soon came to a stop with ignition trouble. At the start of lap two Wilson Fittipaldi crashed his Brabham at the hairpin.

At the front the order settled down and the two Lotuses led the two Tyrrells for much of the race. On lap 33 Stewart passed his team mate and tried to apply some pressure to the Lotuses.

Despite being in their fourth season the 72s still had an edge on performance. But their reliability could be suspect. Fittipaldi began to struggle with his rear brakes as oil from the gearbox dripped onto the discs, leaving him to rely only on his front brakes. Meanwhile Cevert dropped back into the clutches of Hulme. But as they lapped slower cars Jackie Oliver ran wide, kicking up dirt which lodged in the throttle slides of Hulme’s car. Hulme pumped the throttle pedal while switching his Cosworth DFV off in the corners, trying to loosen the slides. They eventually freed up – but by then he had lost 15 seconds.

Hulme turned off the rev limiter and resumed the chase, quickly latching onto Cevert’s tail. This time the pair came up to lap Hulme’s team mate Peter Revson, who made life difficult for Cevert allowing ‘The Bear’ to get by.

His chances were improved as Stewart also began to experience braking problems. Hulme passed the Tyrrell and Fittipaldi as well, the Lotus’s gearbox surrendering with four laps to go.

With his closest rivals suffering problems Peterson finally looked on course to finally score his first grand prix win and make amends for his near-miss in Spain three races earlier.

But he too was in trouble. Increasingly troubled by a slow leak in his left-rear tyre, Peterson was surprised to see Hulme gaining rapidly. As they came onto the long back straight for the last time, Hulme had the Lotus in his sights.

“Now, when you’re a Swede and you look as though you’re about to win the Swedish Grand Prix, you don’t stand any nonsense from bears,” Hulme later recalled.

“So he came moving across to the right, just as I knew he would and that was the signal for the Fastest Bear in the World to go sailing back across his slipstream and I slingshot down past the Lotus right on line for the corner at the end of the straight.”

Hulme had been lying fifth with 20 laps to go and in the drama of his late-race charge had lost track of the number of laps remaining. When he took Peterson on the final lap he thought he had at least four more to run.

The McLaren driver took the flag first with Peterson limping in four seconds behind. Cevert and Reutemann were next followed by Stewart. Ickx claimed the final point for Ferrari.

Peterson’s gut-wretching misfortune was Hulme and McLaren’s gain. It was the first of 16 wins for the M23.

The car’s performance was not lost on Fittipaldi, who was beginning to tire of the pressure from Peterson and frustration of Lotus unreliability. That month he began negotiations with Texaco and Marlboro to fund a big-money switch to McLaren the following year.

The Swedish Grand Prix remained on the calendar for five years but never saw a home winner. But in 2007 the World Touring Car Championship made a one-off return to a little-changed track where, in a reversal of fortune, Rickard Rydell took a surprise last-lap home victory.

19 comments on “Today in 1973: Last-lap heartbreak in first Swedish GP”