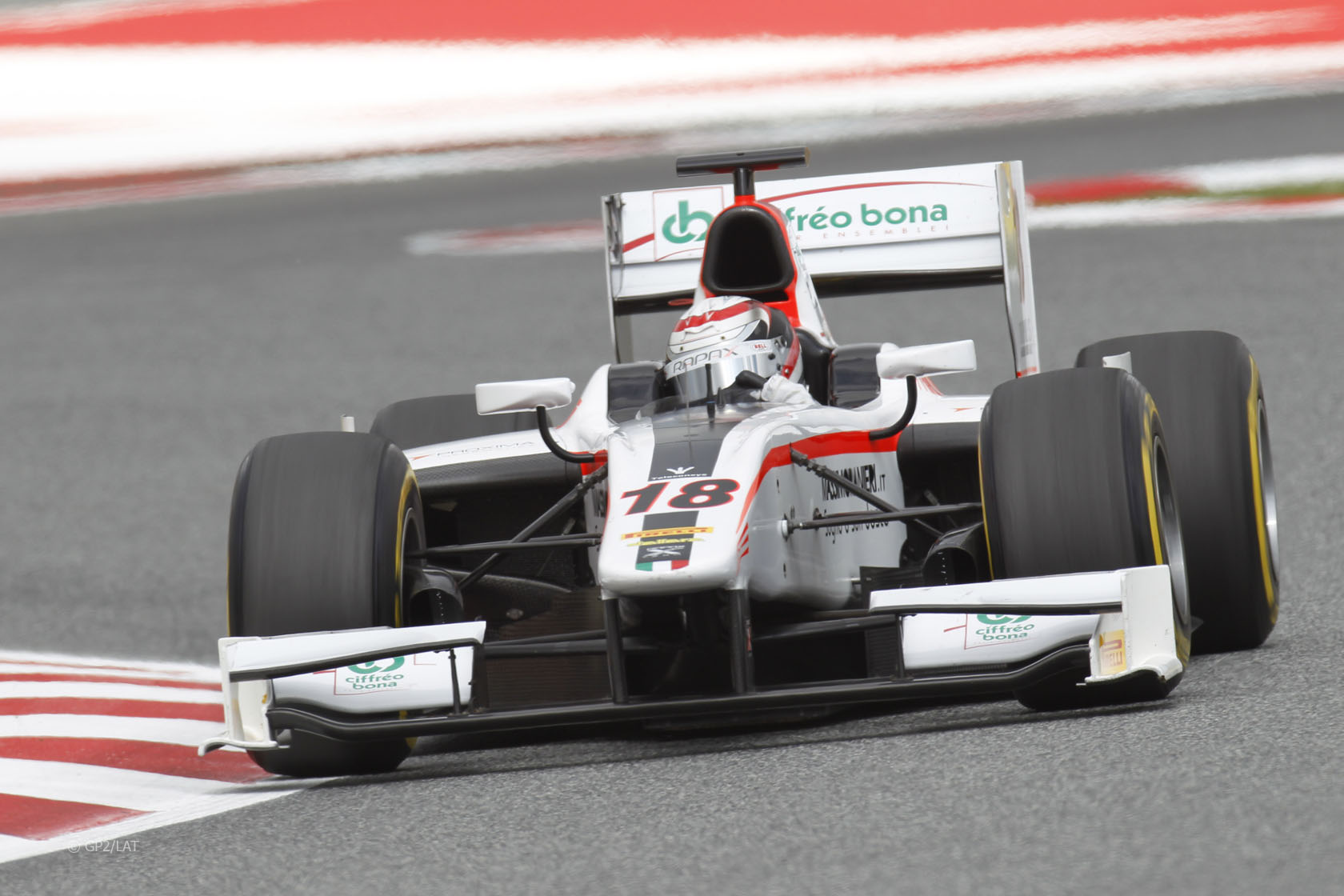 Stefano Coletti went into the third round of the GP2 championship with a ten-point lead over Fabio Leimer. He left it with a much increased lead after several of his closest rivals hit trouble.

Marcus Ericsson looked on course to bounce back from a troubled start to the season when he claimed his first pole position for the feature race. But an early retirement meant he came away from the track with nothing more than the four points he earned on Friday.

Meanwhile Leimer tangled with James Calado at the start of the feature race which ruined both of their weekend.

That allowed Robin Frijns in to claim an impressive first win for him and Hilmer Motorsport in only his third start. Remarkably he came close to repeating it in the sprint race as well. Marcus Ericsson was surely hoping that starting from the front row again wouldn?ů‘ťľ‘šůt result in the same result as Bahrain, when he stalled on the grid. Thankfully the DAMS driver suffered no such bad luck, and made a fantastic start to lead the field away. His team mate Stephane Richelmi wasn?ů‘ťľ‘šůt so lucky, as he lost places to Coletti and Felipe Nasr with a poor start.

Further back both Calado and Leimer had only produced fairly average qualifying performances, leaving them in the midfield. Sam Bird got a fairly poor start and Leimer attempted to jink left around him. Calado ?ů‘ťľ‘«£ trying to avoid a slow starter in front of him ?ů‘ťľ‘«£ ended up pulling across straight into the path of Leimer, effectively eliminating them both from the race.

Frijns and Palmer make gains in the pits

Robin Frijns, Jolyon Palmer and Alexander Rossi were the first to pit as soon as the window opened on lap six. Ericsson, Bird and Jon Lancaster ?ů‘ťľ‘«£ who had replaced Pal Varhaug at Hilmer Motorsport ?ů‘ťľ‘«£ were forced to respond the lap after. The extra lap on the hard tyres and in clean air had helped the first men who pitted however, added with a slow stop for Ericsson meant the DAMS man held only a slight lead from Frijns.

The remaining front runners pitted soon after leaving those who had started on the hard tyres at the front of the pack. But with fresh tyres the front runners started to come back at the leaders.

With so many close in such close company the racing started out superb, with drivers giving each other just enough room. It got too close into the final chicane however as Giovesi baulked Ericsson and Bird was forced around the outside. The Russian Time driver clipped the rear of the DAMS car and Ericsson was forced to retire. Frijns eventually took the lead of the race from Palmer, Bird and Coletti as Mitch Evans became the last man of the leaders to pit on lap 28. But Felipe Nasr was soon closing on the Hilmer driver, having saved his tyres, and began slicing his way through the field. He was soon up with Palmer and clipped his team mate as he fought his way past, fortunately without losing his front wing.

Bird tried to get passed Palmer too but the Carlin man pushed Bird off the circuit and the Russian Time driver’s day ended in the gravel four laps from home.

Frijns held on up front to claim a fantastic first win for himself and Hilmer, followed closely by Nasr with Palmer joining them on the podium in third. But Palmer was later demoted however for his incident with Bird which promoted Jon Lancaster, making it a double podium for Hilmer Motorsport.

*Jolyon Palmer was given a 20-second penalty for forcing Sam Bird off of the track.

Coletti and Frijns fly from the start Johnny Cecotto got a decent start from pole position while fourth-place Tom Dillmann stalled on the grid. Coletti got a flyer to move into second but the real surprise was Robin Frijns, who was up into third by turn one.

Cecotto tried to hold on but Coletti was around the outside and into the lead. The Arden man tried to fight back but a small mistake cost him further ground to Frijns and Nasr.

From then on the race became about saving the tyres until lap 20, when Palmer finally fought his way past Cecotto?ů‘ťľ‘šůs damaged Arden. With Cecotto so slow a train of more than ten cars formed up behind him as they began the last few laps.

Kevin Ceccon and Alexander Rossi both failed to pass Cecotto but it was Sergio Canamasas who got the best run on the exit of turn 12. Cecotto attempted to shove him wide, causing a domino effect behind them and left Rio Harayanto with nowhere to go.

He drove straight into the back of Canamasas while several drivers cut the final chicane in a desperate bid to avoid the mayhem. It was an unfortunate end to the race for Canamasas who’s been involved in a similar incident with Berthon the day before.

Up front Coletti held off the fast-closing Frijns to claim his second win of the season. Felipe Nasr rounded off the podium in third, meaning he has now finished all six races in the top four without winning one of them.

That consistency means Nasr is now Coletti’s closest rival in the championship. But the driver who scored the biggest points haul this weekend – Frijns – does not even know how many more races he will compete in this year.

14 comments on “Coletti retains lead after sharing wins with Frijns”