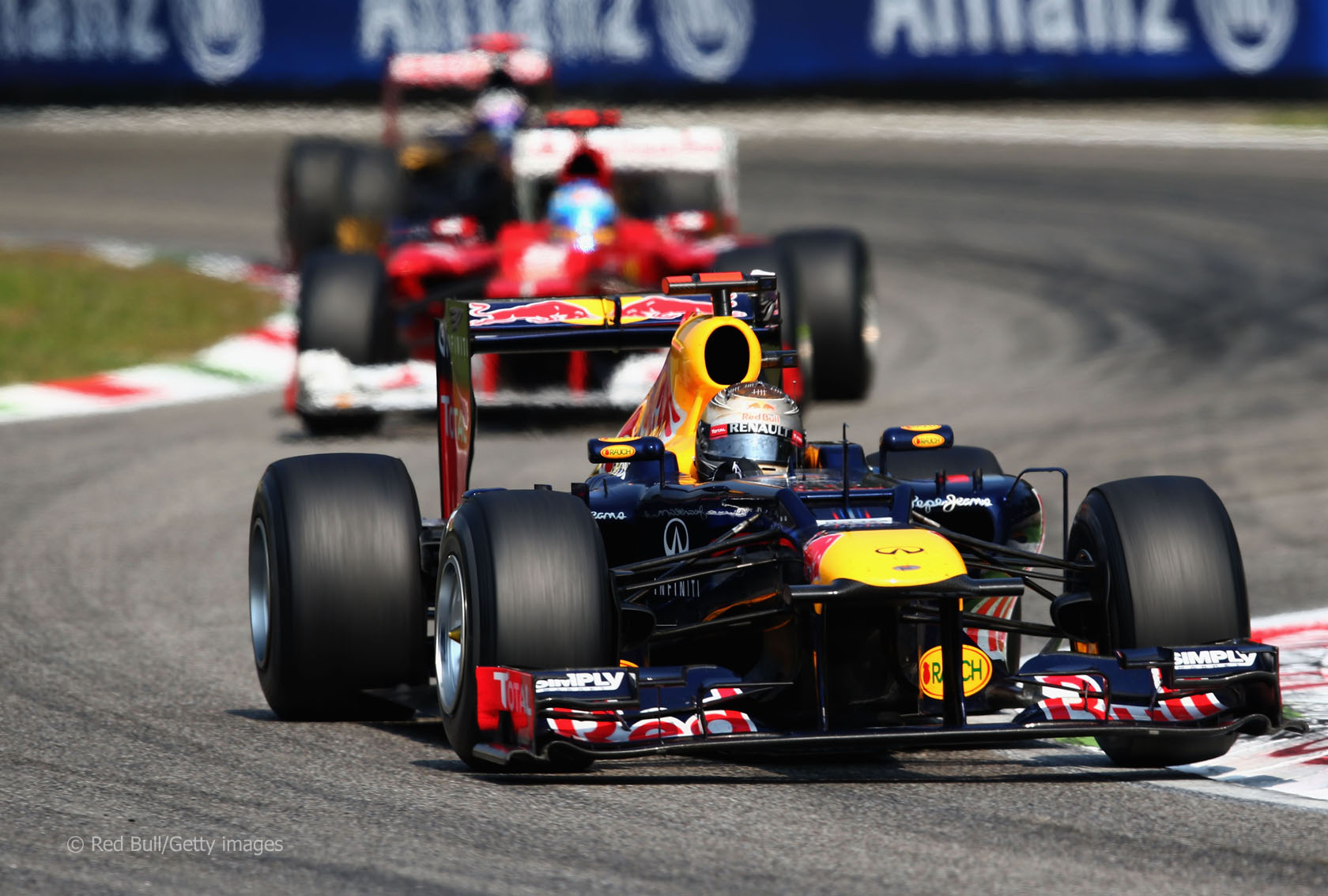 Red Bull’s dominance looked to be a thing of the past as the season began with neither of the RB8s in the first two rows on the grid. Jenson Button beat pole-sitting team mate Lewis Hamilton to the first corner and went on to win, while Sebastian Vettel split the McLarens for second.

Fernando Alonso endured a difficult first weekend in the F2012, dragging the car home fifth despite persistent pressure from Pastor Maldonado, who crashed out on the final lap trying to overtake the Ferrari.

A downpour in Malaysia forced the second round of the second to a halt. Once the race resumed Alonso conjured up an inspired performance to win, resisting pressure from Sergio Perez’s Sauber late in the race. Nico Rosberg led in the previous two races at the Shanghai International Circuit. This time he went one better, dominating the race from pole position as Mercedes enjoyed a competitive start to the season with the W03. But it didn’t last. The Bahrain Grand Prix was held under a cloud – literally and metaphorically. The sport was condemned for putting on a race which the country’s government billed as “one nation in celebration” a little over 12 months after killing several pro-democracy protesters.

Despite a huge security presence disturbances continued during the race weekend and Force India missed the second practice session in order to travel back to their hotel in daylight after being caught up in a petrol bomb attack the day before. The race, won by Vettel, was watched by an unsurprisingly thin crowd while protesters burned piles of tyres outside the circuit. Williams had played down expectations after reuniting with former engine supplier Renault, with whom they enjoyed huge success in the nineties. It took them just five races to return to winning ways, ending an eight-year spell away from the top step of the podium.

But the celebrations of Maldonado’s maiden triumph were interrupted when a fire broke out in the garage. Thanks to the quick-thinking and brave actions of personnel from several teams, it was extinguished before anyone was seriously injured. Monaco should have been the scene of Michael Schumacher’s first pole position since his comeback. But having been quickest in qualifying he was relegated to sixth due to a penalty from the previous race.

Mark Webber inherited pole position and repelled Rosberg to claim his first win of the year in a processional race in which the strategists repeatedly urged their drivers not to pit for tyres as the weather radars were indicating imminent rain. Aside from a brief light shower, it never came. Hamilton made it a record seven different winners in the first seven races by beating Vettel and Alonso to victory in Canada. His win hinged on recognising early on that a second stop for tyres would be necessary.

Vettel’s belated stop and Alonso’s attempt to finish the race without one cost them podium finishes, elevating Romain Grosjean to second place ahead of Perez. Alonso didn’t fancy his chances of getting onto the podium from 11th on the grid, but the combination of a great driver, superb teamwork in the pits and a little luck gave him a brilliant victory on home ground. His pass on Grosjean following the restart was particularly special, and later on during the lap he inherited the lead when Vettel stopped with alternator failure.

Schumacher claimed his first podium finish since his comeback while Webber recovered from 19th on the grid to finish fourth.

A sodden weekend at Silverstone surprised everyone by clearing up in time for the race. Alonso recovered from a dramatic spin during qualifying to take pole position, but starting on hard tyres left him vulnerable later in the race on softs and Webber passed him for Red Bull’s third win of the year. Another wet qualifying session, another Alonso pole position – but this time he converted it into victory as well, despite pressure from Vettel and Button.

An unlucky Hamilton picked up a puncture early on, then aggravated Vettel by unlapping himself from the Red Bull. Vettel had trouble with the other McLaren too, passing him outside of circuit boundaries late in the race, earning a penalty which dropped him from second to fifth.

McLaren were back on form and Hamilton won the Hungarian Grand Prix from pole position. He faced stiff opposition from the Lotuses but used the Hungaroring’s lack of overtaking opportunities to his advantage, slowing Raikkonen in the twisty infield in an attempt to make him use up his tyres more quickly. Driving standards were in the spotlight after Grosjean triggered a shocking pile-up at the start of the race. He was handed a one-race ban. Maldonado also felt the wrath of the stewards, picking up two penalties for the next race after jumping the start and crashing into Timo Glock.

Once the debris had been cleared away Button converted pole position into victory while Vettel pulled off several great passes on his way to second place having been outside the top ten at the restart. Raikkonen also made some impressive moves, diving past Schumacher as they plunged downhill towards Eau Rouge. Alonso felt he was robbed of an “easy” pole position when his car failed him in Q3. Hamilton started at the sharp end and won again, but team mate Button retired from second place.

Perez claimed that position having passed both Ferraris, Raikkonen and others in a bravura performance. Jerome D’Ambrosio deputised for the absent Grosjean at Lotus. Hamilton was on his way to another win when his McLaren’s gearbox failed. Victory fell into Vettel’s hands, and it began a string of wins that put him on course for a third world championship.

Alonso was third for the third race in a row, while an on-form Paul di Resta claimed his best ever finish with fourth. For the second time in four races Alonso was out at the first corner, this time paying a high price for edging towards Raikkonen as they headed to turn one. There was more chaos as Grosjean tipped Webber into a spin and Bruno Senna collided with Rosberg.

Once all that was cleared away Vettel sprinted off to win while Felipe Massa continued to turn around his poor season by scoring his first podium finish in two years. But the biggest cheer was reserved for home hero Kamui Kobayashi, who made his first visit to the podium. Webber beat Vettel to pole position but Vettel made the better start and won the race. Alonso gave chase but had to settle for third, losing the championship lead to Vettel.

Hamilton continued to suffer with McLaren unreliability, dropping back with another fault during the race which worsened when he collected a clump of Astroturf. For the second year in a row India’s well-liked round of the world championship produced a dreary race, won by Vettel with ease. Alonso salvaged second after passing both McLarens early on, then capitalising on Webber’s loss of KERS late in the race. Qualifying delivered a dramatic twist in the championship as Vettel was penalised for running out of fuel and sent to the back of the grid. But in a feat of damage-limitation having started from the pits and made several useful set-up changes he salvaged third place.

Alonso was in front of him in second while Raikkonen became the eighth different driver to win a race, taking the lead after Hamilton’s McLaren let him down once again. The impressive new Circuit of the Americas in Austin, Texas was warmly received. The brand new surface which yielded little grip and helped produce a remarkable race. Hamilton won after stalking Vettel and pouncing when they lapped Narain Karthikeyan’s HRT.

Alonso came in third after Ferrari deliberately broke a gearbox seal on Massa’s car to move their other driver forward on the grid. Massa and Button rose from 11th and 12th to finish fourth and fifth respectively. The season came to an exhilarating end in Brazil with a gripping race in which the outcome of the championship never looked quite certain. The scene was set when Vettel was knocked into a spin on lap one, picking up damage at the rear of his car.

While Vettel pressed on in an attempt to get back into the point, Alonso was briefly in position to claim the the championship. Conditions were treacherous, with occasional rain showers catching out the drivers. Vettel’s race was made even more difficult due to a faulty radio, which caused a slow pit stop at one point.

Nico Hulkenberg was the star of the race, leading for 30 laps but eventually dropping to fifth after spinning into the persistently luckless Hamilton. That handed victory to Button with Alonso second, and sixth place for Vettel was enough to cement his third consecutive drivers’ championship title.