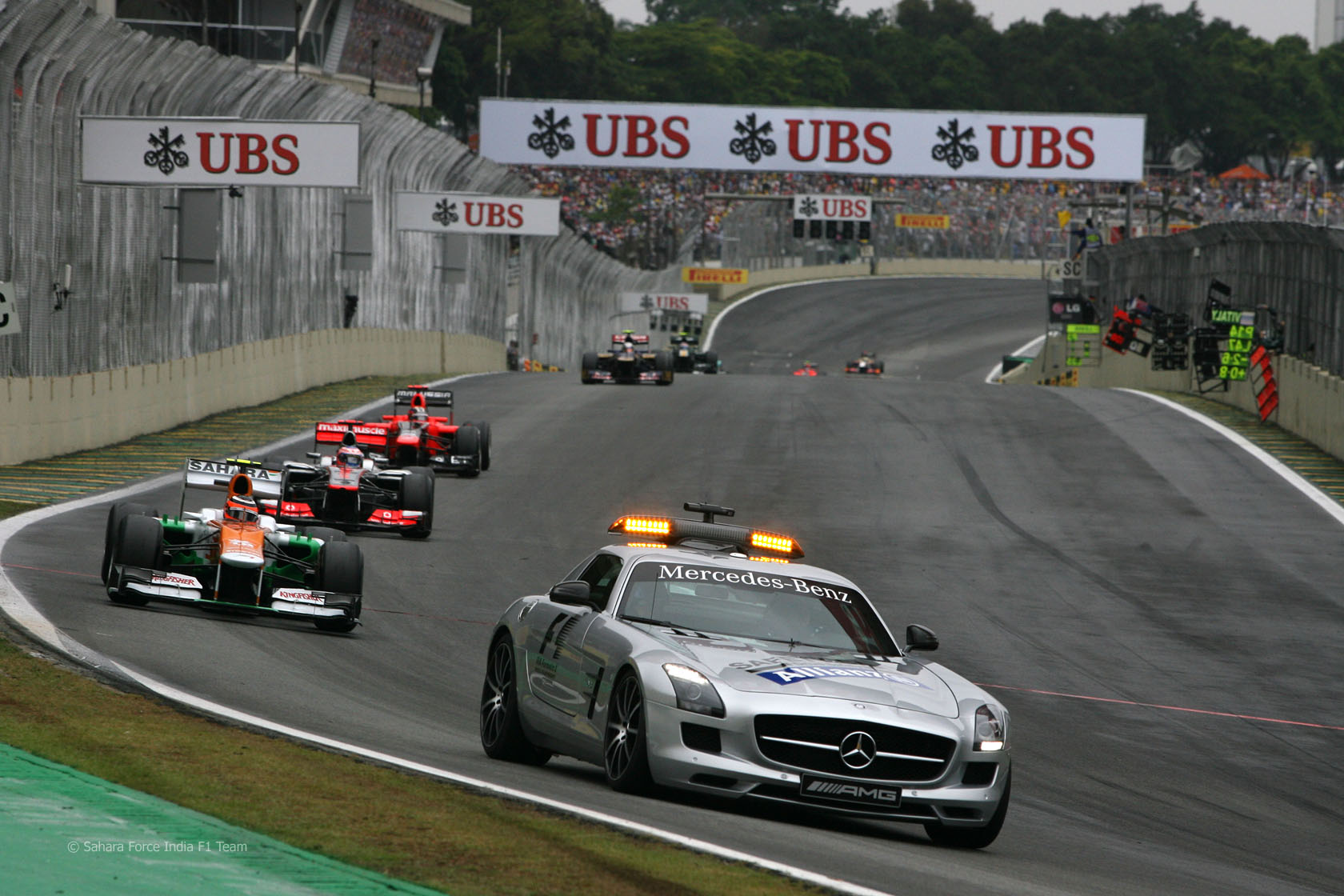 In the round-up: Force India criticise the decision to deploy the safety car early in the Brazilian Grand Prix, which wiped out Nico Hulkenberg and Jenson Button’s 45-second lead over their rivals.

Force India deputy team principal Bob Fernley: “I think the safety car was a joke. I thought we were playing NASCAR. We could’ve done that debris under double yellow flags.”

“When reminded that his gifts were more instinctive than technical, he replied: ‘I guarantee you that is not the case. I don’t need to blow smoke up my own arse. I know what I am capable of, although it won’t take a major effect until halfway through next season, although more so with the car for 2014. It just means I have to cram a lot into a short space of time. I don’t have a problem with that.'”

“At the moment, I don’t see any point thinking about another team or something else. I’m extremely happy in the position I am. It’s incredible what we have achieved.”

Jonathan McEvoy: So what happens next for Lewis, McLaren and Bernie? (Daily Mail)

“Will Hamilton regret leaving [McLaren]? No time soon. He finally found McLaren so claustrophobic that one team principal privately said he thought Hamilton would have rather taken a year out than stay.”

“[Vettel] drives the Red Bull concept – he turns in on the brakes, which gives understeer, then when he gets the brakes off, the front grips, the car rotates around the nose and he nails the throttle because he’s got confidence that the rear aerodynamics will make the back grip.”

“There was quite a lot of damage to the exhaust and they’re sensitive bits of equipment and to receive an impact like that was massively concerning. What we saw is as the pace picked up the problem became more evident; the loss that Sebastian had. Then we saw another bit of the bodywork disappear off the car.”

Champion Sebastian Vettel deserves all of our respect (The National)

Gary Meenaghan: “[Adrian] Newey and Vettel appears not just difficult to beat but omnipotent. At the start of the season, when the car was not the quickest and results proved unpredictable, Vettel showed his worth and his consistency to collect double-figure points at five of the first seven races.”

“Contrary to some reports it not due to the rights change bombshell that hit us in 2011. Of course, not doing every race live was tough because that is where I think I and the team excel.”

Incredible finale! What a race! What a season! Thanks to Force India for two great Years. And Congrats Seb and Red Bull!

@Marcky was in the stands at Interlagos on Sunday – and in 2008:

I was there yesterday at Interlagos watching the race in grandstand A by the main straight. Got to say, it was an amazing race, even for us who were watching at the track getting soaked by the rain.

There was so much going on at the same time that we didn?óÔéĽÔäót know where to look at, if we tried to look at the large screen showing the replay, we?óÔéĽÔäód lose an overtake in the main straight or in the middle sector. Everyone there was just blown away after the race ended, we were privileged to have seen history being made live.

Comparing this year’s race with 2008, for me 2008 was still better (and I am Brazilian!). This year’s race probably had more twists and turns, and was more action packed, but the fact that in 2008 nobody knew who was going to be champion until the very last minute made it the ultimate thriller. We’ll probably never see something like that happen again.

And for me, it will always be a moment that I?óÔéĽÔäóll never forget, the disappointment was so intense, I mean, we were watching a Brazilian driver about to become champion, something we have been waiting for a long time since we lost Ayrton Senna, and on top of that, he would be champion in Brazil! When I saw Hamilton passing Glock on the last turn, we were just speechless.

So, I guess this year?óÔéĽÔäós race was more fun, but the 2008 Grand Prix was more emotional and intense.
@Marcky

Mark Webber scored his first win of last year in the final round of the season. But the manner in which it was achieved, following a gearbox problem on his team mate’s car, inevitably raised questions over whether it had been a true triumph.