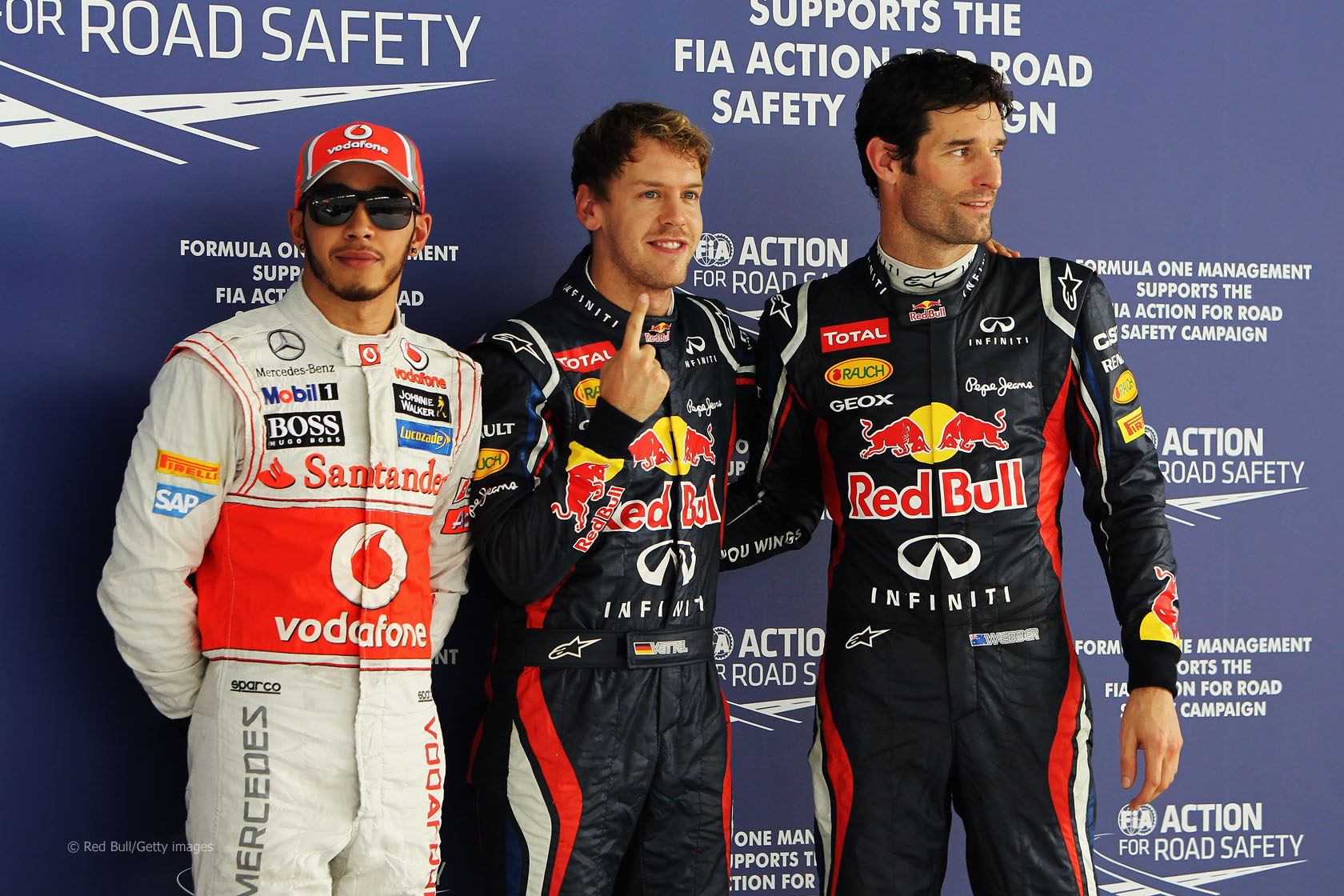 He came close to missing out after a mistake on his first lap in Q3. But he recovered with his final run to keep Mark Webber from pole position.

The Red Bull drivers locked out the front row of a the grid for the third time in as many races, with McLaren and Ferrari lining up neatly behind them.

Red Bull and McLaren joined the track fairly late in Q1 to avoid having to use a set of soft tyres. They comfortably made it through, though Vettel lost his fastest time to Pastor Maldonado at the end of the session.

The Ferraris also secured safe passage through to Q2 by giving each other slipstreams on the back straight. Felipe Massa made it through despite spinning at turn 15 while on course to improve his time.

Not for the first time in 2012, Jean-Eric Vergne was eliminated in Q1. It was his team mate who delivered the final blow, pushing Vergne into the drop zone.

Paul di Resta narrowly avoided elimination after improving his time despite catching Pedro de la Rosa at the end of his lap.

Vitaly Petrov out-qualified team mate Heikki Kovalainen, who spun into a gravel trap at turn 11 at the end of the session.

Vettel’s place in Q3 never looked in jeopardy – he pumped in a 1’25.435 to reach the final ten and returned to the pits, having only put a total of eight laps on his tyres during the first two parts of qualifying.

By the end of Q2 the McLaren drivers, perhaps aided by improvements in the condition of the track, had closed to within a few hundredths of a second of him. Nico Rosberg’s Mercedes also looked quick.

Massa only narrowly secured his place in Q3 with a late improvement. Fellow Brazilian Bruno Senna was also eliminated having looked quick earlier in the session.

Romain Grosjean failed to make the cut after making a mistake at turn seven. And neither Force India reached Q3 in their home race.

The final part of qualifying did not get off to a good start for Vettel as he made a mistake on his first lap and had to return to the pits. Webber set the fastest time to begin with on a 1’25.327, followed by Alonso and Hamilton.

Vettel returned to the pits and produced a clean lap with his second effort which was enough to claim the top time back from Webber by four-hundredths of a second.

Webber had a chance to beat that with his final run. He asked for more front wing for the lap but locked up at turn three and ran wide, losing his chance for a second consecutive pole position.

That allowed Vettel to return to the pits early as they felt secure in their advantage over McLaren. Hamilton improved to third with his final run to form an all-McLaren row two.

The Ferraris shared row three after Massa posted a considerable improvement with his last lap including the fastest run through the first sector. Raikkonen, Perez and Maldonado were next, and Rosberg chose not to set a time.