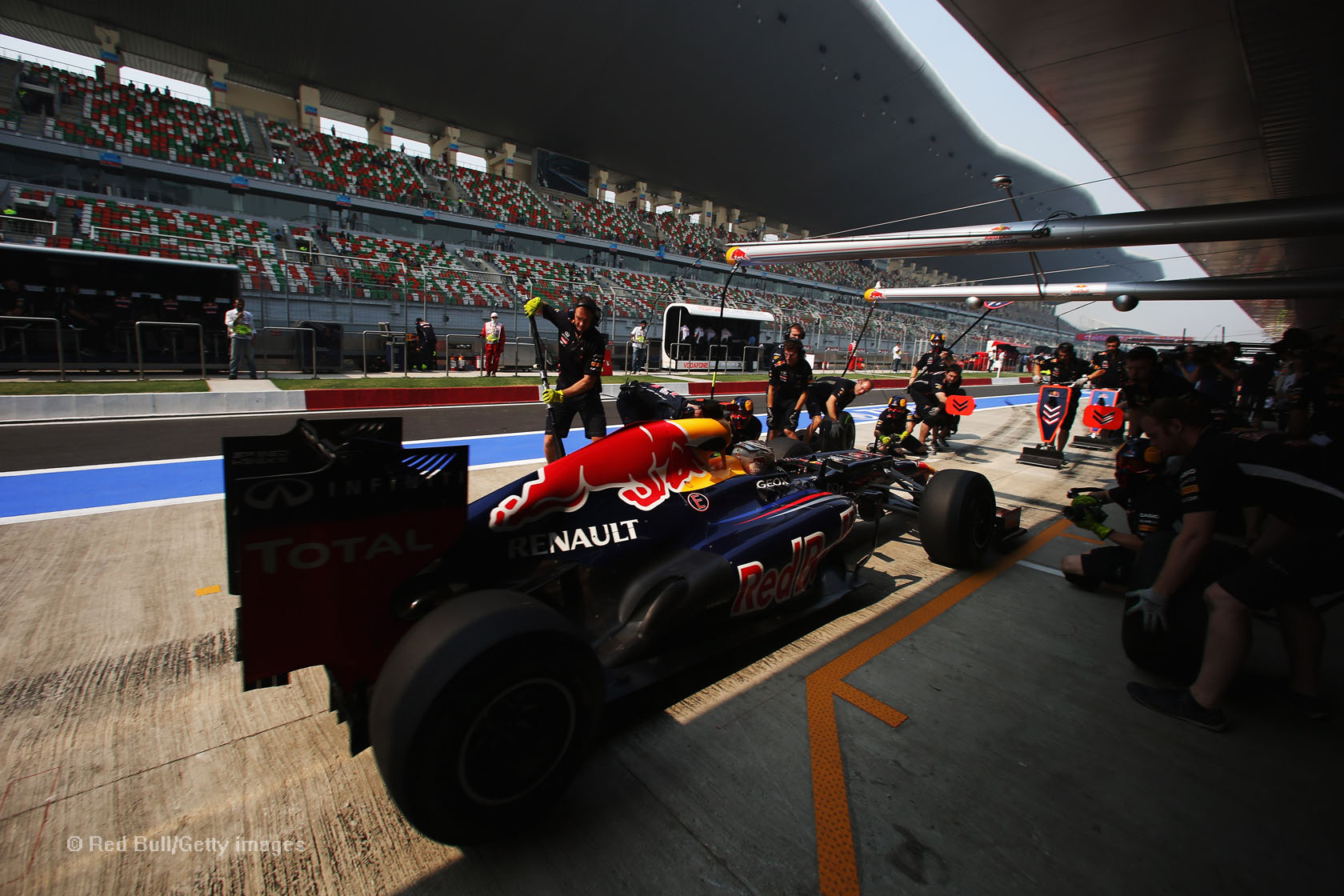 The first day of practice for the Indian Grand Prix offered few crumbs of comfort for Red Bull’s rivals.

Here’s all the data from practice.

Sunday’s race is for 60 laps and some drivers were able to run 20-lap stints with little difficulty during the second practice session.

That raises the prospect of drivers being able to make one fewer stop than they did in 2011. “Last year the winning strategy consisted of two stops,” said Pirelli motorsport director Paul Hembery, “but this year one pit stop might even be possible for some drivers from what we can see so far.”

Curiously, Kamui Kobayashi chose to do his race simulation run at the beginning of the session. He did 17 timed laps and set his quickest time on the 16th.

Jenson Button’s progress was halted by yet more technical problems for McLaren: “I had a gearshift problem during my long run in the afternoon. The team is currently looking into it ?óÔéĽÔÇŁ hopefully, we?óÔéĽÔäóll have it sorted by tomorrow.”

McLaren were only the fifth-quickest team but Lewis Hamilton is confident they’ll perform better on Saturday: “I think we?óÔéĽÔäóre probably quick enough to qualify third or fourth fastest at the moment, but, to go for pole, we?óÔéĽÔäóre going to really need to push hard in our development work tonight”

Their real one-lap speed deficit to Red Bull is probably closer to the four-tenths we saw in first practice than the nine-tenths gap in the second session.

But in race trim the car looked like a match for anything, as Hamilton was told during the session. Despite topping both practice sessions on Friday Vettel was characteristically cautious about Red Bull’s potential. “We?óÔéĽÔäóve had worse Fridays, so I am happy,” he said.

But with no obvious weakness in their race pace he will be eyeing a shot a pole position which should set him up for a crack at victory. A fourth consecutive victory is a distinct possibility.

“One of the settings on his car was incorrect and that compromised the balance of the car and prevented him from getting the most out of the set of softs and also led to him spinning, which damaged one of the tyres, pretty much ending his session.”

After having his first run Gutierrez said: “It is obviously different to testing and it is challenging to stay focused. I think the circuit here is amazing, especially with the chain of fast corners. However, my target was to progress during that session and make sure I brought the car home in one piece.”

The Red Bull pair had been quicker in a straight line after the team introduced their Double DRS upgrade, but were at the foot of the speeds in India. Could this prove their only weakness?