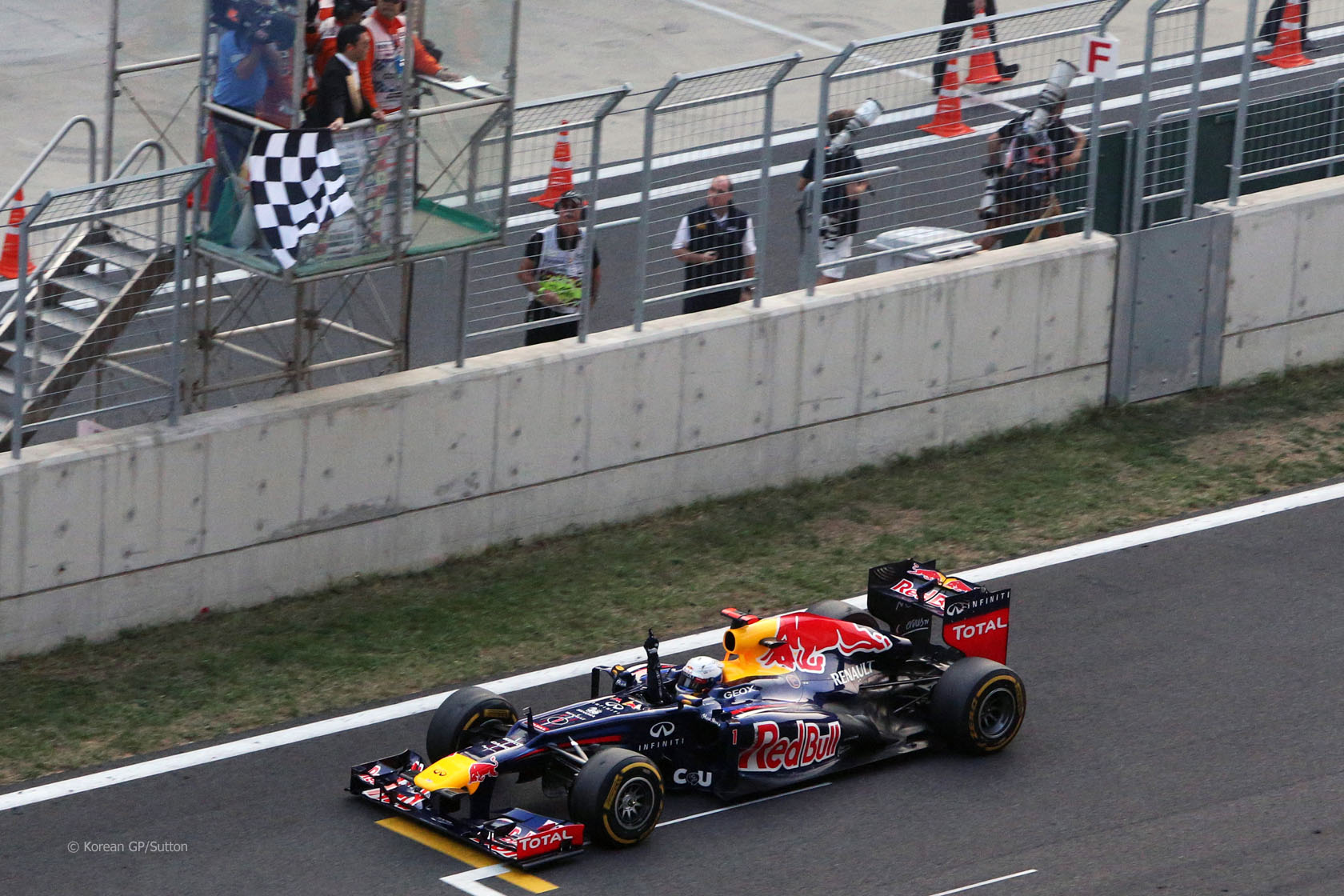 Sebastian Vettel’s 25th career win means he has now won as many races as Jim Clark and Niki Lauda.

Michael Schumacher still lies far ahead on 91 but Vettel has closed to within five of Fernando Alonso’s tally of victories.

Vettel narrowly missed out on pole position, which went instead to his team mate. Mark Webber recorded the 11th of his career. Curiously, Webber is now the only driver to have set exactly eleven pole positions and scored exactly nine wins.

He finished second in the race, which doubled the number of points he has scored in the seven races since announcing he will remain at Red Bull next year.

Red Bull became the first team this year to score a one-two finish. It was the 12th in their history.

Vettel leads 145 laps in a row

Vettel led throughout the Korean Grand Prix as he did in Japan. Since Lewis Hamilton’s retirement in Singapore Vettel has now led for 145 consecutive laps.

Few other drivers have led more laps consecutively. Among them is Webber, who led 159 laps in a row from the 2010 Spanish to 2010 Turkish Grands Prix. Kimi Raikkonen strung together 162 consecutive laps in the lead which, like Webber, also began with victories in the Spanish and Monaco Grands Prix.

The outright record for most consecutive laps in the lead belongs to Alberto Ascari. After taking the lead from Jean Behra on lap two of the 1952 Belgian Grand Prix he led the rest of the race plus every lap of the next four Grands Prix, a total of 305.

Fortunately we didn’t have Rate the Race back then. To beat the record, Vettel will have to lead all of the next two races, plus the first 46 laps of the United States Grand Prix.

Other great names which appear on the list of most consecutive laps led are Jim Clark (165 from the 1963 Belgian to French Grands Prix), Ayrton Senna (267 from the 1988 British to Italian Grand Prix and 237 from the 1989 San Marino to United States Grand Prix) and Nigel Mansell (235 from the 1992 Brazilian to Monaco Grands Prix).

By leading throughout this year’s Korean Grand Prix, Vettel has now led 153 of the 165 laps F1 has raced in Korea. The only other driver to have led this race is Fernando Alonso.

Vettel also passed Alonso as the driver who has led the most laps this year, with 267 to Alonso’s 216. Hamilton is next on 182. Renault celebrated the 200th pole position for a car powered by one of their engines. Here’s how many Renault-engined pole positions have been set by different teams:

Elio de Angelis became the first driver to start a race from pole position driving non-Renault chassis with a Renault engine when he put his Lotus 94T on pole position for the 1983 European Grand Prix at Brands Hatch.

Only Ferrari engines have achieved more pole positions, with 208. Between them they account for almost half of all poles in world championship races – 46.7% of the 874 so far.

Then there were two (or six)

With four races left this year there are now only six drivers mathematically capable of winning the championship.

Realistically, the title fight is now between Vettel (215 points) and Alonso (209).

Kimi Raikkonen is now 48 points behind with a maximum of 100 to be won. Hamilton is 62 behind, Webber 63 adrift and Button 84 away. Lewis Hamilton salvaged tenth place for McLaren after a miserable race. However it kept intact their record of scoring in every race since Jenson Button joined them as Hamilton’s team mate.

They have now scored in 54 consecutive races, one short of the all-time record held by Ferrari. This was set between the 1999 and 2003 Malaysian Grands Prix, during which time points were awarded to the top six until 2003, and then to the top eight.

But Hamilton might not want to dwell on the following statistic. Before he announced he would drive for Mercedes in 2013 they had scored in every race this year. They’ve failed to score in either of the races since. Nico Rosberg’s involvement in two first-lap crashes, neither of which were his fault, hasn’t helped matters.

Daniel Ricciardo received his first penalty of the year when he took a five-place grid drop for a gearbox change. That leaves just Alonso and Timo Glock as the only drivers to have entered every race without collecting a penalty.

Jean-Eric Vergne scored points for the third time in his career, all of which have come from eighth-place finishes. With Romain Grosjean scoring as well this was the first time two French drivers have appeared in the points since the 1997 Luxembourg Grand Prix at the Nurburgring, when Jean Alesi finished second and Olivier Panis sixth.

Pedro de la Rosa made his 100th start in a Grand Prix. He chose to mark this achievement during the Italian Grand Prix, which as noted here was the 100th race he “was entered for with the intention of starting it”, but only his 97th actual start.

Spotted any other interesting stats and facts from the Korean Grand Prix? Share them in the comments.