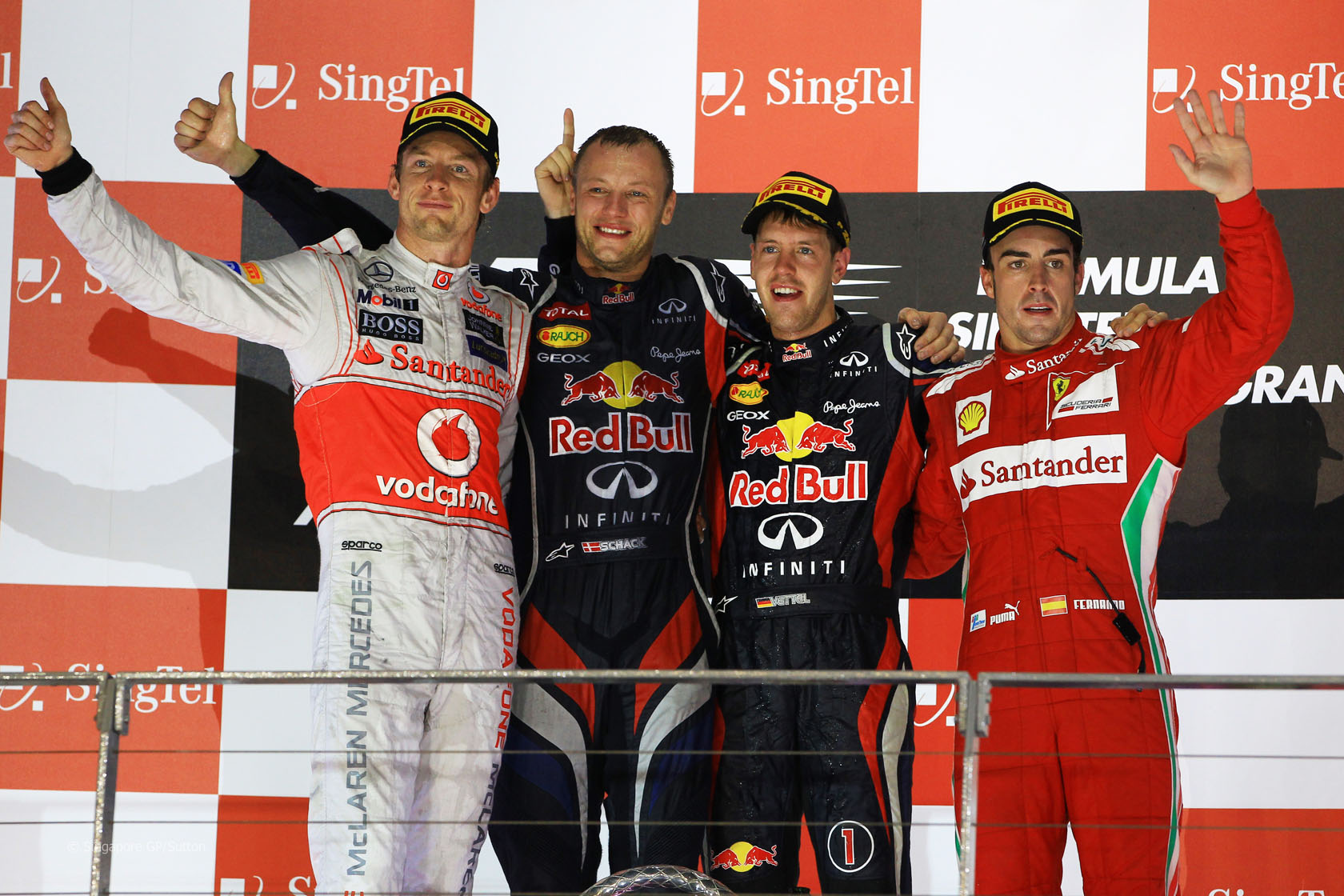 Peteris (@Spicais666) racked up the highest score in the Singapore round of the Predictions Championship.

It was a particularly impressive win given this was his first appearance in the championship after he joined the site on Friday. Correctly predicting the pole sitter and the top four finishers earned Peteris 31 points and a prize of a 1975 Autocourse eBook.

A two-way tie for second and third place was won by @Toddbarden, who moves up to fourth in the championship and claimed a Grand Prix Heroes DVD as a prize. Third place and a PJ Tierney F1 poster was won by Fernando (@Alonso2012).

Sebastian Vettel was the overwhelming favourite for pole position, picked by two-thirds of players, but he was beaten to it by Lewis Hamilton. However over half correctly picked Vettel to win the race.

@Zantex remains in the lead of the championship and pulled a further point ahead. See the updated points standings in full here:

Here are the predictions and scores for the nine highest-scoring players in this race:

Remember you can make your predictions for all the remaining rounds of the season below and edit them whenever you like up until the start of each qualifying session.

The person who scores the most points over the whole season will win two grandstand tickets to the 2013 British Grand Prix at Silverstone.

The grand prize winner will receive tickets to all three days of the event with reserved seating for the race.

Second place prize: An F1 painting of your choice

The second place finisher will win a Formula 1 painting by Rob Ijbema.

You get to choose which F1 driver, present or past, will feature in the painting.

Or you can pick one of the other motor racing paintings on Rob’s site:

The five players with the next highest scores (positions three to seven) will each win a year’s subscription to Racecar Engineering magazine.

Racecar Engineering is the world?ů‘ťľ‘šůs leading motorsport technology magazine. Every issue is packed with in-depth features, interviews and analysis from Formula One, Le Mans and all forms racing and rallying.

The five players with the next highest scores (positions eight to 12) will each win a 2013 Autocourse calendar.

The Autocourse Grand Prix calendar contains images taken during the season of all the major players competing in the Formula One World Championship.

The images are high resolution and taken by one of the world’s leading Grand Prix photographers, the calendar is printed on art quality paper and comes with a stiffened backing board and shrink wrapped for protection.

More prizes to be announced

Further prizes will be announced during the season.

The highest scorer in each race will win an Autocourse eBook. The 1971 edition will be the first prize up for grabs, and later players will have the chance to win 1972 to 1976 editions.

The Autocourse eBooks are faithful reproductions of the original annuals in digital form. The colour, clarity of images and text have been improved to modern standards, but the content remains in original format.

Autocourse has become the definitive record of Formula One racing the world over and early editions are collector?ů‘ťľ‘šůs items, which regularly trade for hundreds of pounds.

The second-placed player in each race will win their choice of one of Duke Video’s new Grand Prix Heroes DVDs (pictured top).

The third-placed player in each race will win one of PJ Tierney’s excellent unofficial Formula 1 posters.

You can view PJ’s posters along with his other work on his website:

To enter, predict the pole sitter and the top five finishers in the race. You can also enter a prediction for the pole position lap time – this may be used as a tie-breaker.

If you haven’t got one yet the sign-up process is quick, simple and entirely free: sign up here now.

After entering your prediction, you will receive an email confirming your entry. If this does not happen, or you are concerned your prediction has not been received, please get in touch using the contact form.

16 comments on “Rookie win for Peteris in Singapore Predictions round”