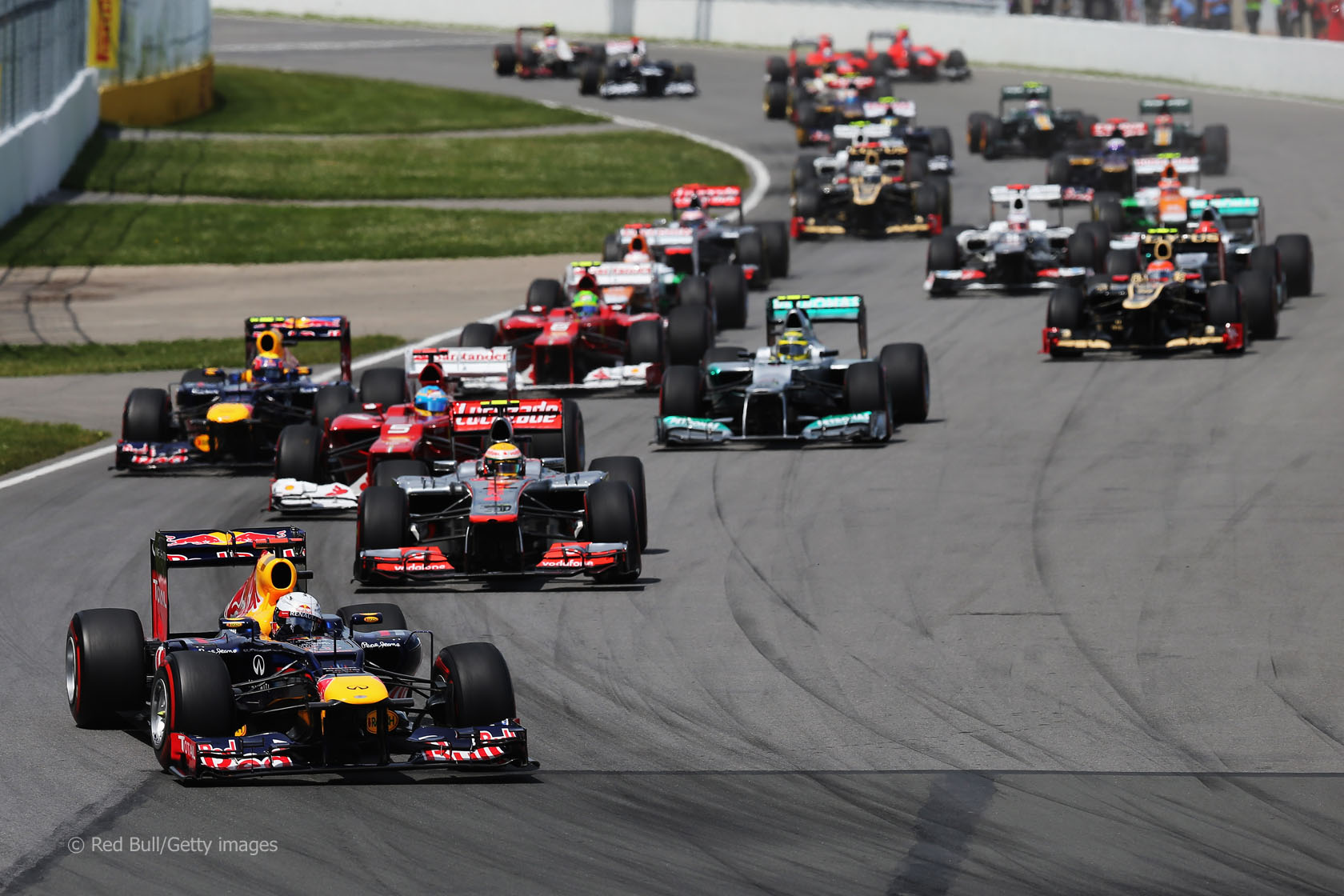 Which F1 driver had the best race weekend in Canada?

Compare all the drivers’ performances below and vote for who you think was the best driver of the Canadian Grand Prix weekend.

Sebastian Vettel – Was fastest in every session on Saturday and produced two laps quick enough for pole position in Q3. Kept the lead at the start but had already begun to fall into the clutches of Hamilton and Alonso before his pit stop, and ended up behind both of them. Red Bull gave up on their attempt to finish the race without a second stop, allowing Vettel to recover to fourth.
Mark Webber – More than half a second off Vettel in qualifying, his biggest deficit this year, admitting he wasn’t comfortable with the car in the final corner. Dropped back from the pace of the leaders and lost time behind some of the one-stoppers, finishing seventh.

Jenson Button – Given his recent difficulties with the tyres, losing around 50 laps of running on Friday was exactly what he didn’t need. Scraped into Q3 thanks to Maldonado crashing in Q2, but never figured in the race and ended up a lapped 16th after three pit stops and no pace.
Lewis Hamilton – Looked committed and fast from the word go on Friday, but couldn’t match Vettel’s pace for pole position. A quick in-lap got him ahead of Vettel when he made his first pit stop, despite pulling out of his pit box slowly. Had to pass Alonso after the Ferrari driver got ahead through the stops, then pulled away into the lead. McLaren committed to a two-stop strategy which left Hamilton needing to re-pass Vettel and Alonso to win, but with both slowing on worn tyres they were easy pickings in the DRS zone, allowing Hamilton to claim his first win of the year.

Fernando Alonso – After the race Alonso said this was the first time the team had tried to win a race instead of limit damage – an interesting comment in light of how close he came to victory in Spain. He also said his 1’14.1 in qualifying was the car’s limit. Alonso started third and jumped into the lead after staying out longer than Hamilton and Vettel. Stuck to a one-stop strategy despite losing pace in the final laps – as a result he was passed by Hamilton, Grosjean, Perez and Vettel.
Felipe Massa – Carried on his improved pace from Monaco, qualified sixth and passed Rosberg at the start. But he threw away a strong position in the opening laps with a spin, and ended up last of the points-scorers. Michael Schumacher – Schumacher’s dreadful 2012 luck persisted in Canada. His DRS jammed open during the race – a repeat of a problem he suffered in qualifying in Bahrain. He was running a lowly 12th at the time.
Nico Rosberg – Lacked pace at the start and was passed by Massa and di Resta while Mercedes were preoccupied with saving fuel and tyres. Committed early to a two-stop strategy which allowed him to jump Webber. But taking to the chicane while trying to pass Massa on lap 56 cost him dearly – he was passed by Perez and the resultant delay denied him a chance of taking advantage of Vettel and Alonso for what could have been a podium finish.

Kimi Raikkonen – Did not reach Q3 after an hydraulic problem in Q2. Started on soft tyres and ran long but was jumped by Perez when they pitted, which also allowed Rosberg past. Had strong pace at the end but couldn’t pass Webber for seventh.
Romain Grosjean – Slightly quicker than his 2005 Canadian Grand Prix-winning team mate in practice on his first visit to the Circuit Gilles Villeneuve. Stayed out until lap 21 before making his single pit stop – only three to five laps later than the leaders – then kept his tyres alive until the end. Picked off the slowing cars ahead to finish second, 2.5 seconds behind Hamilton. The only blot on his weekend was another poor start, falling behind Paul di Resta, which may have cost him up to ten seconds and perhaps an even better result.

Paul di Resta – Ran as high as fifth early on after passing Rosberg. But struggled for pace after his first pit stop and lost out to the one-stoppers.
Nico Hulkenberg – Having been nine places behind his team mate in the opening stint he ended up following him home for 12th place. Kamui Kobayashi – Ran a similar strategy to Grosjean, making his first stop three laps later. Just fell short of pulling out enough of a gap over di Resta to come out in front of the Force India, which harmed his chances of finishing higher. He held off Massa for ninth place in a reversal of their finishing positions last year.
Sergio Perez – Sauber split their strategies, starting Perez on the soft tyres. He ran long and pitted a lap later than Raikkonen to jump the Lotus driver. He then took advantage of Rosberg cutting the chicane to overtake the Mercedes on the outside of turn one, before slipstreaming past Massa on the same lap. That left him free to collect another place when Vettel pitted and finally passed Alonso for his second podium finish of the year – at a track where he hadn’t raced before.

Daniel Ricciardo – Comfortably out-qualified his team mate but couldn’t make much progress despite a good start. Lost time with a late spin but probably wouldn’t have caught Hulkenberg and Maldonado anyway.
Jean-Eric Vergne – Said the Circuit Gilles Villeneuve was his favourite track when playing the F1 video game, but seemed to find the real thing a tougher proposition. Was out-qualified by both Caterhams and picked up a drive-through penalty after “some sort of problem with the pit lane speed limiter”. Despite all that, he still finished five seconds ahead of Button.

Pastor Maldonado – Crashed at the end of Q2 while on a lap which probably would have put him in the top ten. Another gearbox change penalty dropped him to 22nd – his third start from the back two rows in the last four races. Couldn’t get past the Toro Rossos until they made their second pit stops and finished the race pressuring Hulkenberg for 12th.
Bruno Senna – Lost out to Kovalainen at the start then lost three places on the fifth lap, falling to 19th. Ran a long second stint on the soft tyres but his pace on those wasn’t much better and he finished over 50 seconds behind his team mate.

Heikki Kovalainen – Ran in front of Senna’s Williams early on but dropped behind after his second pit stop. Was disappointed with the car’s pace during the race.
Vitaly Petrov – Stayed in close contention with his team mate all race, finishing five seconds behind.

Pedro de la Rosa – Out-qualified both Marussias for the first time this year but retired on lap 25 with brake trouble.
Narain Karthikeyan – Retired two laps before his team mate with the same problem.

Timo Glock – Struggled in the race with a loss of power, high tyre degradation and finally a brake problem which put him out.
Charles Pic – His nearest opponents all dropped out with brake trouble leaving him to finish two minutes behind the Caterhams.

Who was the best driver of the Canadian Grand Prix weekend?