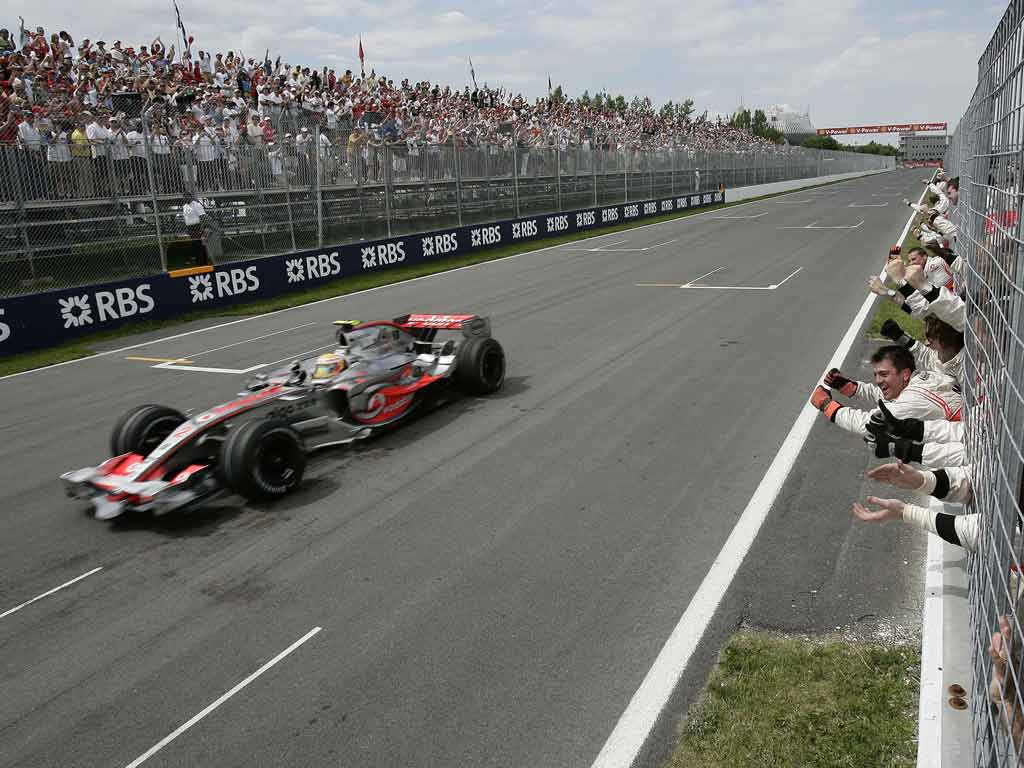 The final part which gets fitted to an F1 car is its driver.

But it’s a human element and, however professional today’s drivers may be, they are susceptible to preferences like the rest of us.

Although they may prefer not to admit it, a driver’s style at the wheel and how they like a car to be set up can lead them to produce slightly better performances at certain tracks.

Can we identify which ‘special tracks’ suit drivers best by looking at their previous performances? Here’s a few thoughts, starting with the next race on the calendar.

Lewis Hamilton has always gone well at the Circuit Gilles Villeneuve, scene of his first F1 win five years ago.

Montreal’s combination of heavy braking zones, high speeds and imposing walls tends to bring out the best in him. He coolly led amid carnage in 2007, and won exciting battle with Fernando Alonso in 2010.

Hamilton being Hamilton, there have been a few ‘facepalm’ moments as well. In 2008 he piled into the back of Kimi Raikkonen’s car at the pit lane exit. Last year he had tangles with Mark Webber, Michael Schumacher and finally his own team mate before calling it a day after just a handful of laps in the rain.

But even on those two less-than-stellar showings he was one of the quickest drivers on the track up to the point of his retirement.

Schumacher’s record here should not be overlooked, with seven victories at the track.

Vettel’s affinity for Suzuka is reflected in his near-total domination of the three F1 races he’s started there: three pole positions, two wins and a third place.

And he might have pushed Jenson Button harder for the win last year had he not also been busy wrapping up his second world championship title.

Vettel described the Suzuka course as “amazing” earlier this year, and singled out Japan as one of his favourite stops on the F1 schedule.

Yes, his 2008 win was anything but kosher. But remember how well he was going in a generally uncompetitive Renault that weekend before being sidelined with a technical problem during his qualifying.

On his subsequent visits to Singapore, Alonso has demonstrated a special talent for the peculiar demands of the long, slow track. The hopeless R29 made its single visit to the podium courtesy of Alonso in 2009, and he snatched pole position and victory from under Vettel’s nose the year after.

Another driver who revels in the unusual challenge of Singapore is Timo Glock. Fourth in 2008, he equalled his best career result with second in 2009.

The year after that he dragged his Virgin to the improbable heights of 11th, holding off Adrian Sutil, Nico Hulkenberg and other better-equipped rivals for a remarkable nine laps. Massa must regret the loss of the Istanbul Park circuit from the F1 calendar, where he scored his first win in 2006, beginning a streak of three consecutive wins from pole position at the track.

But his home record is something to be envied as well. Indeed, he would have had an identical record of consecutive wins from pole had he not been required to let team mate Raikkonen win in 2007 to clinch the world championship.

In 2004 Massa served notice of his potential by qualifying an excellent fourth for Sauber. Although there’s not been much to shout about since his return from injury in 2010, he did equal his best result of the season there last year with fifth.

Something seems to have clicked for Rosberg at Shanghai: since his move to Mercedes, he’s led the last three races there. Rosberg was on the podium in 2010, finishing behind the two McLarens having led 16 laps.

He was on course for a podium finish or better last year before he had to back off and save fuel. This year he finally got the job done with an emphatic maiden victory at the Shanghai circuit.

It might be too early to call him a ‘Shanghai specialist’ on the basis of that, but he’s definitely one to keep an eye on here in the future. Two drivers on the grid today can make good claims on the title ‘King of Spa’.

While Schumacher was en route to his sixth and final win at the circuit to date in 2002, Raikkonen was making a name for himself for different reasons. In qualifying he blasted through a cloud of smoke left by Olivier Panis’s BAR on the Kemmel straight without even a hint of a lift.

Two years later the pair battled for victory, Raikkonen coming out on top as Schumacher settled for a second place that guaranteed his seventh world championship title.

Raikkonen won on his next two visits to Spa and led much of the way in 2008 before crashing out while under attack from Hamilton as rain fell late in the race. His last F1 victory to date came at the track in 2009.

Schumacher’s F1 debut came at this track 21 years ago and he stunned the pit lane with a lap good enough for eighth on the grid, which became seventh after Riccardo Patrese was penalised.

He scored his first win at the track 12 months later and one of his very best victories in 1995, scything through the field to win from 16th. Had he not been disqualified from victory due to a technical infringement in 1994, he would be a seven-times winner here too.

There are many other examples of driving liking or disliking particular tracks. Jarno Trulli was a Monaco specialist and scored his only win there.

So too was Ayrton Senna, and he enjoyed even greater success at the track. But Nelson Piquet famously disliked the track and never won there.

Which other tracks on the calendar do you think particularly suit today’s drivers? Have your say in the comments.

169 comments on “The drivers who excel on their ‘special tracks’”