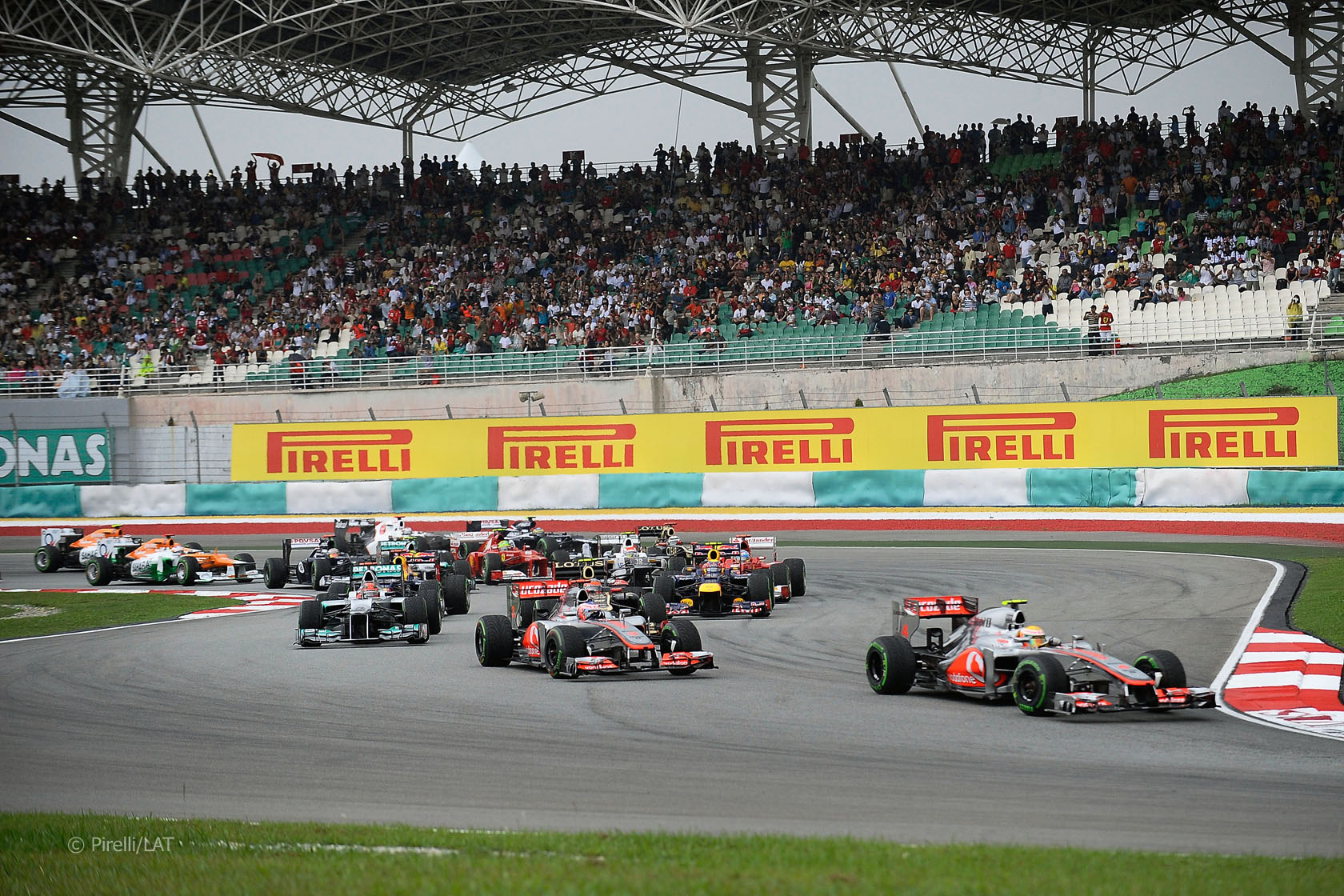 Which F1 driver had the best race weekend in Malaysia?

Compare all the drivers’ performances below and vote for who you think was the best driver of the Malaysian Grand Prix weekend.

Sebastian Vettel – Chasing down Hamilton for a podium when he clipped Karthikeyan, puncturing his tyre and damaging his brake. The stewards blamed the HRT driver but Vettel should have exercised more caution.
Mark Webber – Out-qualified Vettel again but struggled at the race restart. Was passed by Alonso and Vettel – but re-passed his team mate. Eventually elevated to fourth by Vettel’s demise.

Jenson Button – Accepted the blame for hitting Karthikeyan after getting ahead of Hamilton, following his team mate’s slow pit stop. An extra stop for intermediates pushed his tally up to five, but his pace was comparable to Hamilton’s.
Lewis Hamilton – Pole-to-third for the second race in a row. Drove superbly on intermediates when the track was very wet, but couldn’t match Alonso and Perez’s pace in the second half of the race. Poor pit stops were only part of the problem.

Fernando Alonso – Dragged the F2012 into Q3. Produced one of his best performances when the track was at its wettest and took the lead. Kept everything under control in the second half of the race when Perez quicker to score an improbable and brilliant win – despite also losing his telemtry.
Felipe Massa – Seemed happier with his new chassis in qualifying. But the race was a disaster. After the restart on lap 14 he lost over a minute and a half to Alonso by the end of the race: a massive 2.18s per lap. As Alonso crossed the line to win Massa’s car was visible in the foreground, five seconds away from being lapped.

Michael Schumacher – Qualified third and didn’t make his customary brilliant getaway. Was tagged by Romain Grosjean at turn four, dropping him to 16th place. Coped better with the W03’s tyre degradation than his team mate, but even so was fortunate to inherit the final point for tenth when Maldonado retired.
Nico Rosberg – Seems to have lost his qualifying advantage from last year, and an extra pit stop for intermediates dropped him well out of the top ten.

Kimi Raikkonen – Quick enough for fourth in qualifying, a gearbox change penalty left him tenth on the grid. Struggled on unfamiliar intermediates but set the fastest race lap on his way to fifth.
Romain Grosjean – Made a much better start than in Melbourne – until he reached turn four. Tangled with Schumacher and fell to 21st. Gambled on staying out on intermediates but aquaplaned off when the rain got heavy on lap four.

Paul di Resta – Blamed Maldonado for a spin which cost him three places just before the safety car came out. Moved forward at the restart, passing Massa on his way to seventh.
Nico Hulkenberg – Not as quick as his team mate on intermediates in the middle part of the race, he was passed by Vergne and Senna. Nonetheless brought the car home in the points in ninth, 3s behind Di Resta. Kamui Kobayashi – Six-tenths slower than Perez in qualifying, he retired with ten laps to go with braking problems.
Sergio Perez – A breakthrough performance. Took the Sauber, which hadn’t looked great in practice, into Q3. Gambled on an early switch to wets which put him in contention for the lead with some great laps when the circuit was at its wettest. Reeled in Alonso in the second half of the race but a mis-timed pit stop and a mistake at turn 13 ultimately blunted his charge.

Daniel Ricciardo – Lost out in the opening laps but was one of the first to switch to slick tyres which paid off handsomely. He was the quickest driver by three seconds on lap 39, which helped him finish ahead of Jenson Button and Nico Rosberg.
Jean-Eric Vergne – Knocked out in Q1 after flat-spotting a tyre on his last lap. Bravely stayed out on intermediate tyres until the race was red-flagged, which took him up from 18th to seventh. Passed Massa on his way to claiming his first points for eighth.

Pastor Maldonado – Was up to fifth by lap five but missed his pit box when he came in on lap 14, dropping him to 20th. Much quicker than Senna in the first laps after they changed to slicks, he was running tenth when his engine failed two laps from home.
Bruno Senna – Lost his front wing on the first lap so he switched to wets early. Despite that he came in again for more wets six laps later. Having fallen to last, he had a strong second half of the race, passing Massa and Di Resta to finish sixth and score Williams’ first points of 2012.

Heikki Kovalainen – Started last following his penalty from Australia. Damaged his nose after being passed by his team mate and finished 18th behind Glock.
Vitaly Petrov – Kept Massa behind for 15 laps and took 16th, showing good pace compared to Kovalainen.

Pedro de la Rosa – Started from the pits and was given a drive-through penalty when his team failed to get off the grid in time for the restart. Caught Karthikeyan but lost more time pitting two laps later than him for slicks.
Narain Karthikeyan – Used wets for the first stint, like his team mate, and crossed the line in ninth place on lap 13. Was hit by Button and later made contact with Vettel – the latter while being lapped. Handed a questionable 20-second penalty for the Vettel incident which dropped him behind de la Rosa.

Timo Glock – Was chased by Kovalainen in the closing stages but held on to take 17th.
Charles Pic – Kept Kovalainen behind in the middle of the race after the Caterham driver’s extra pit stop, enabling his team mate to finish the race ahead of his rival.

Who was the best driver of the Malaysian Grand Prix weekend?