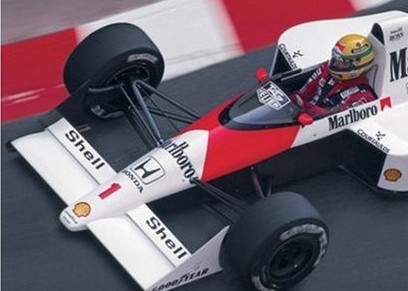 The Formula 1 in Camera series spans four books, each of which features a decade of Formula 1 photographs.

The first two books cover the fifties and sixties and feature pictures from a range of sources – mostly the LAT archive but also some lesser-known agencies.

The two books on the seventies and eighties use a selection of photographs by Rainer Schlegelmilch. While those in the earlier books are very good, some of Schlegelmilch’s pictures really are a cut above.

Some of his best and most famous pictures are here, including the iconic shot of Stefan Johansson’s flame-belching Ferrari at Monaco in 1985.

There are many other less well-known but similarly dramatic shots. Another one also shows Johansson, this time in a McLaren in 1987, doused in sparks by the leading Brabham of Andrea de Cesaris.

The images have been chosen with an eye not just for the spectacular, but also the revealing and sometimes amusing as well.

One picture which gives a revealing glimpse of how F1 has changed by shows Wilson Fittipaldi in the 1972 Austrian Grand Prix speeding past a bright yellow hoarding advertising “sex shops”.

Others are more poignant – such as the mobile Grand Prix Medical Unit pictured at Monza in 1970 bearing a list of patrons including Jochen Rindt, who lost his life that weekend.

Throughout all the books, the editors have done fine work in ensuring the range of pictures goes beyond the usual crowd-pleasing subjects of Ferrari, McLaren and other front runners. Many of the more obscure entries can be found here and not just in the more recent books.

They’ve been thoughtfully laid-out as well, with extra space given over to the best photographs without letting the fold of the page get in the way.

Inevitably the 1950-59 book is largely made up of black-and-white photography, but also has some striking colour pictures.

All four books offer a generous selection of images to feast your eyes on. At ?é?ú35 a pop they’re not cheap, but they make a superb photographic record of each period and will be my first port of call whenever I’m looking for a picture of a particular F1 car.