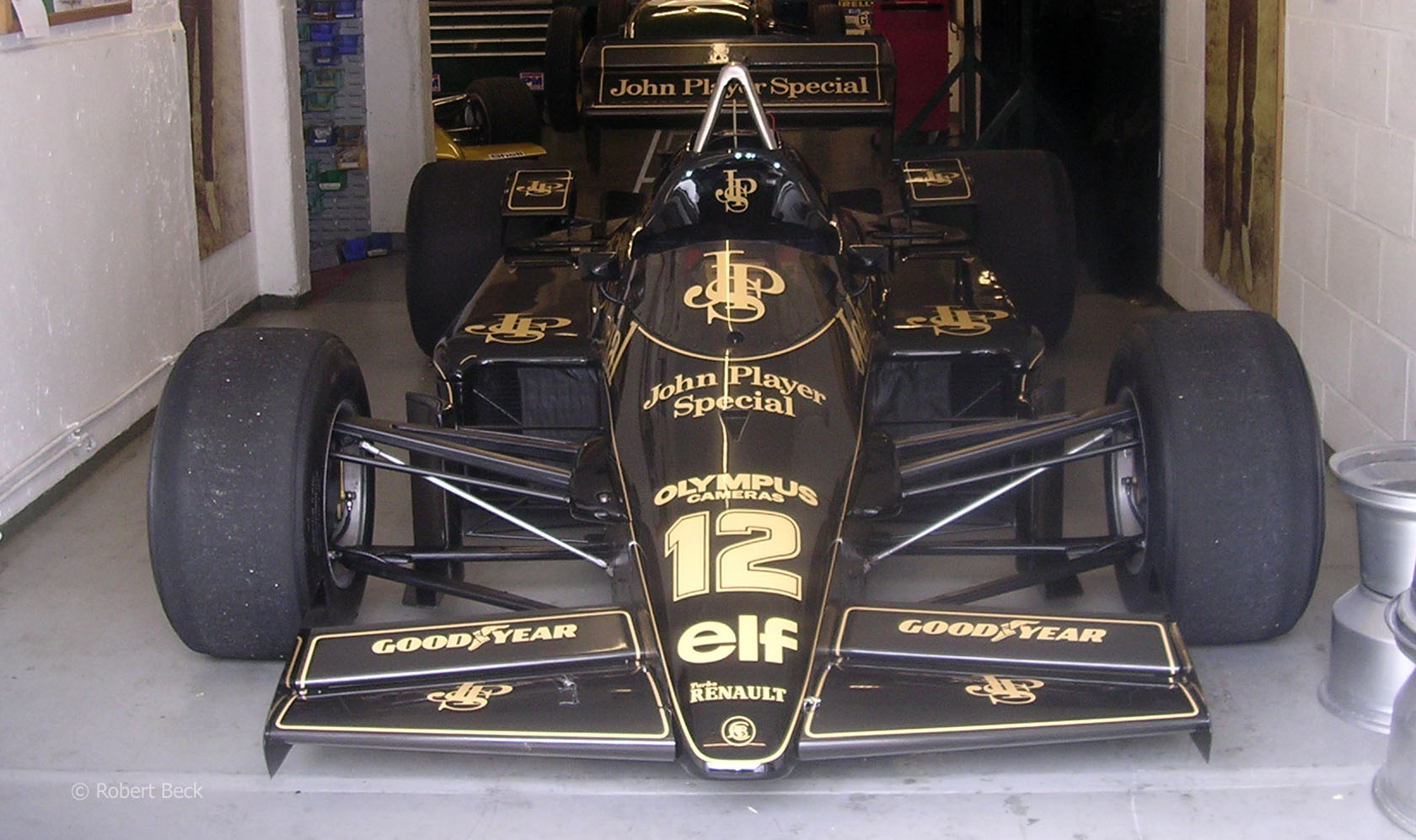 Martin Donnelly’s career as an F1 driver began and ended in 1990. Donelly suffered appalling injuries in a crash during practice at Jerez.

Last year he drove an example of the car he crashed – a Lotus 102 – at the Goodwood Festival of Speed. But away from the crowds he also had the chance to drive another special classic Lotus: a Renault turbo-powered 97T of the type Ayrton Senna scored his first F1 win with in 1985.

Robert Beck was there to see Donnelly’s return to the cockpit. Here are his memories of a special day.

That particular stretch of Potash Lane was wooded, with nothing to place it in time. On the right stood a low building that might have begun life as a workplace either before or right after the war, appearing to have been added-to each time a little more space was needed. Parked beside was an older transporter in green and yellow, small by today?óÔéĽÔäós Grand Prix standards but obviously still in use.

The sign said “Classic Team Lotus”. For some of us the word ?óÔéĽ?ôclassic?óÔéĽ?Ř is superfluous; there has always been just one Team Lotus, really. Pulling into the lot was like unwrapping a decades-old issue of Motorsport Magazine.

Classic Team Lotus is a proper racing shop, but even more than that a place where Colin Chapman, his drivers, and his team changed the face of auto racing. It was filled with remarkable cars in cue for maintenance.

A 49B in Gold Leaf livery caught my eye, bearing a muscular presence that crushed any thoughts that it might be a replica or pretender. There was a number 1 on the sides and front. Graham Hill. He won at Monaco in that car. Twice.

Next to it was a 72 in the iconic John Player Special black and gold. The nose and upper bodywork panels were set on one of the shelf racks that lined all the walls and I could see the workings of the front suspension, torsion bars, and inboard brakes.

The boxy radiator pod wore another number 1. Emerson Fittipaldi. Both cars were parked at random angles in the cramped space.

Further down the room, in front of the wooden swing-out doors that hung at the ends of all the bays was a 99 dressed in Camel yellow, sitting on work stands. People were carrying parts, looking at drawings, having discussions. An electric fan droned in the corner, a phone conversation leaked out of one of the small fluorescent offices to the side, a dropped tool echoed on the concrete floor.

Racing cars are smaller in person than they appear on television or in magazines, and those of an earlier age have a distinct, hand-built quality that is menacingly spare. Formed sheet metal, rivets, hand welds: they are crafted to do the job and no more. Here and there you see an elegant turn but also a modification, something added, something competently but quickly rethought. A Formula 1 car is always evolving, and every time it is driven limits are being tested.

In another bay, a twin-chassis 88 shared space with Mario Andretti’s stunning, championship-winning 79.

But I gravitated towards a narrow garage where Ayrton Senna’s 97T faced out to the back lot. There were no buttons or dials on the Momo steering wheel. The dash carried just a few switches and instruments, and a big red light in the center. The gear stick lay to the right, and there was what looked like a chassis adjustment selector by the left leg. A monster to be sure, but one you could imagine driving without needing a month of practice in a simulator. Senna?óÔéĽÔäós name on the side put you in tight proximity of a great saga. I walked around it for a long time, looking, listening.

My business was done and I was about to call my friend to pick me up when Clive Chapman, by whose generosity I was there in the first place, walked over and asked if I wanted to watch them shakedown the 97 at Hethel. I wasn?óÔéĽÔäót sure what that involved but it had to be good and I said yes without hesitation. In a few minutes I was in the rear seat of a Jaguar, back on Potash Lane, heading towards the Lotus Cars factory.

Lotus Cars is located at what was a WWII airfield called Hethel, in Norfolk. There is a guard station as you come onto the property and another checkpoint before you enter the test track out back. The terrain is flat, and without grandstands or barriers it looks just like a rural airstrip. The transporter was parked facing us inside the gates and we pulled along side.

As we walked to the rear of the truck I could hear the whine of the platform winch lowering the car to the pavement. There were two mechanics; one leaned over the cockpit taking hold of the steering wheel while another pushed from behind on the wing. Clive and I each rolled a wheel. When the car was clear one mechanic unfastened the engine cover and I helped him lift it over the roll bar and out from under the wing, walking forward to place it on the ground in front.

I turned and noticed a small, nondescript station wagon parked off to the side. A man sat on the tailgate struggling to get a pair of racing overalls onto his legs, one of which didn?óÔéĽÔäót bend. It was an effort. Clive saw what I was looking at and said, “Martin Donnelly. Had a terrible accident. A works driver.”

Donnelly – of course. A name connected forever to the image of a driver laying on the track during practice at Jerez in 1990, seat still strapped to his back, legs splayed at an impossible angle, his shattered Lotus 102 on the grass next to the guardrail.

It was a bright, overcast day with no shadows, warm and a little humid. People had come out of the factory and were standing quietly against the fence. The mechanics tinkered with the engine, the only sound a muffled clink of tools and occasional low comment. They engaged the starter from behind a few times then fiddled some more. Then the engine caught with sudden loud barks; not revving but rather bouts of screaming then cutting out. They kept it going for a minute, probably to get temperature, then let it die. I heard a murmur from our audience.

Donnelly came over and slowly, painfully, worked his way into a cockpit that was not built for comfort. One of the mechanics crouched and talked to him about keeping the revs in range while the other provoked the Renault turbo to fire again. The temperamental engine had to be fought and finessed to get the car rolling. It was a bit of a scrap, the car lurching and the motor trying to quit, but Martin won the day and coaxed it onto the track.

The sudden bursts and loss of power made it difficult to drive the car. Still, it moved quickly around the 2.2-mile circuit. After two laps Martin pulled off the track and over to the transporter. The mechanics lifted the engine cover, made some adjustments, and lit it up again. It was only a little better and Donnelly still struggled to get back onto the course.

Out on the long runway straight, into the hairpin and back. Then through the long series of curves. The four of us stood watching the helmet, roll bar and wing scooting above the grass infield, suddenly changing direction and darting to the next corner. Then the car slowed. We all cleared our throats. It was apparent there was work to be done before the car could be shipped to a demonstration the next weekend. Donnelly coasted up to the transporter, and after a brief conversation with the mechanics began the slow process of extricating himself from the car.

Clive drove me to Norwich, where I was staying. I don?óÔéĽÔäót remember our conversation. My head was swimming, trying to process the day?óÔéĽÔäós events and reconcile them with 40 years of watching and reading about Grand Prix racing. The ability to form intelligent sentences had failed me. The shakedown would have been memorable regardless of who drove Senna?óÔéĽÔäós 97, but with Martin Donnelly in the car there was a poignancy at play that brought realities into focus. It?óÔéĽÔäós all a test of limits. That?óÔéĽÔäós something I think about now whenever I hear the term ?óÔéĽ?ôworks driver.?óÔéĽ?Ř

Donnelly spoke to F1 Fanatic about his 1990 crash in this interview: