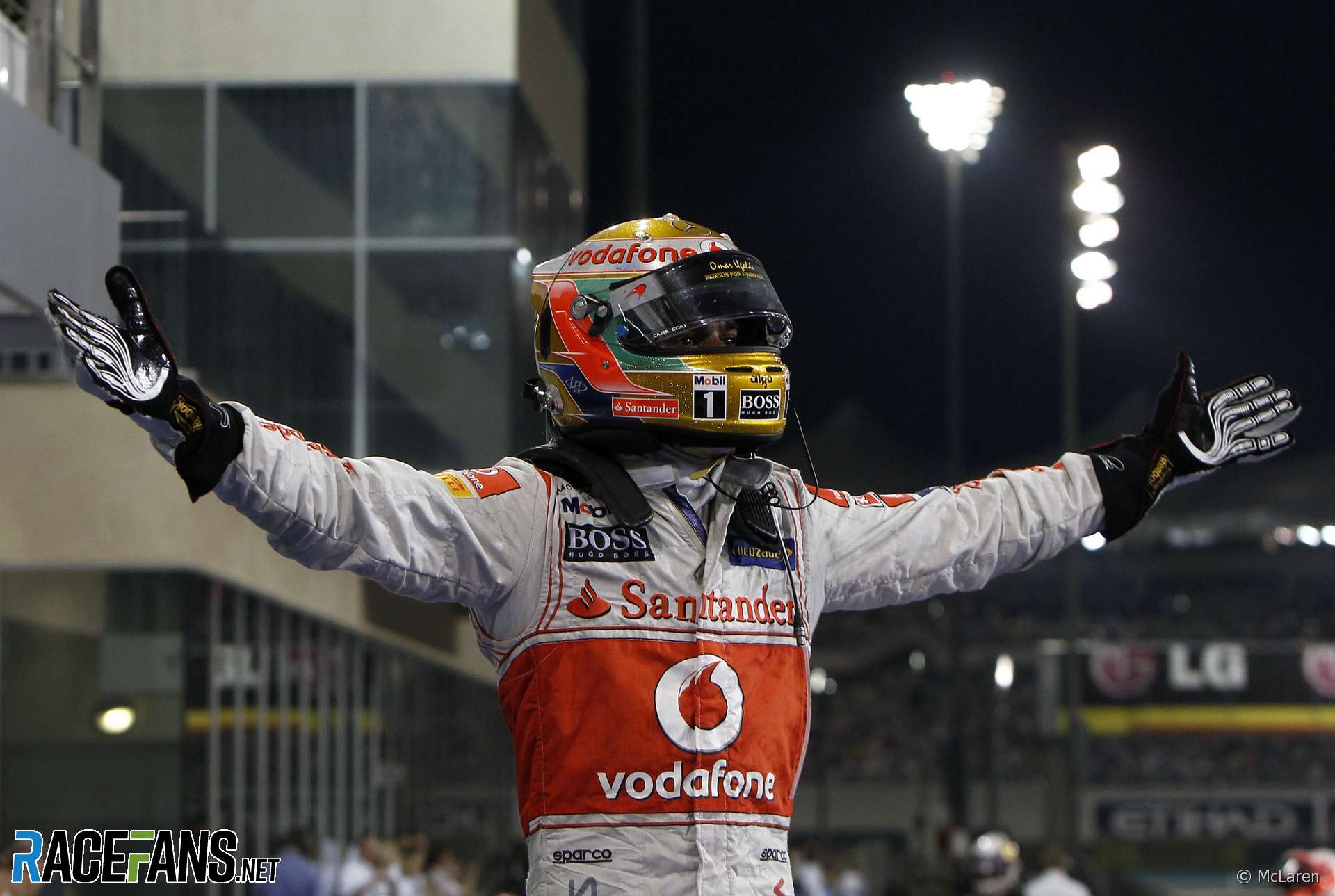 Lewis Hamilton won his third race of the year after Sebastian Vettel surprisingly retired from the Abu Dhabi Grand Prix.

The Red Bull driver pirouetted out of the race within moments of the start following a mystery puncture.

That opened the door for Hamilton, who led home Fernando Alonso and Jenson Button for victory.

The race took a dramatic turn within seconds of the start. Vettel got away cleanly and led into turn one untroubled by Hamilton behind.

But as he turned into the second corner the Red Bull snapped sideways and spun off, his right-rear tyre punctured. The field hammered by as Vettel dragged his car back onto the track and slowly around to the pits.

Driving a long, slow lap of Yas Marina caused suspension damage and Vettel’s race ended when he returned to his garage.

The lead of the race fell neatly into Hamilton’s hands, and behind him a frantic scrap for position handed him a 2.5-second lead by the end of the first lap.

Fernando Alonso picked off Mark Webber on the outside of turn one then set about attacking Jenson Button to claim second.

Hamilton maintained his advantage over Alonso while Button initially slipped back into the clutches of Mark Webber and Felipe Massa.

The McLaren driver began to draw away and his race engineer told him he was now safe from Webber in the DRS zone. But after a KERS problem developed on the McLaren Button came under pressure again.

Webber mounted an attack in the DRS zone, squeezing down the inside of Button at turn 11. But the McLaren driver responded, coming back on the inside of turn 14 to keep the position.

Shortly afterwards Felipe Massa was into the pits and this visit prompted several others to follow him. Hamilton, Alonso and Button all followed on the next lap.

McLaren coped well with pitting both their cars on the same lap, though Button got away slightly slowly due to a slow change on the right-rear tyre. But that was nothing compared to Webber, who had a very slow stop on his visit on the next lap, and temporarily dropped out of the battle for third.

Hamilton continued to manage a three-second lead over Alonso in the second stint, while Massa and Webber gradually closed in on the McLaren driver. Battle was joined between all three of them at roughly the same time, but as Webber began attacking Massa the pair fell back from Button again.

While most drivers stuck to a two-stop strategy, Red Bull gambled on a three-stop strategy to help get Webber in front of Massa and Button. He took a third set of option tyres and ran them until the penultimate lap of the race trying to build up a gap over the pair.

Massa spun off at turn one late in the race but it likely made no difference to the end result as Webber jumped the Ferrari. But Webber couldn’t build up enough of a gap over Button, whose KERS was now working, and who slotted back into third.

Alonso had two laps in the lead after Hamilton made his final pit stop. But despite spending longer on the soft tyres while Hamilton switched to the mediums, Alonso was unable to move ahead of the McLaren at the pit stops.

Nico Rosberg briefly ran third as he postponed his last pit stop, leaving him sixth ahead of his team mate. The other Mercedes driver pulled up with a puncture after taking the chequered flag.

He had been pursued by Adrian Sutil who finished just over a second behind him. The other Force India of Paul di Resta was ninth after pursuing an unconventional one-stop strategy, running a long first stint on medium tyres.

Di Resta spent the opening stint swapping places with Sebastien Buemi. The Toro Rosso driver repeatedly passed him in the first DRS zone, only for the Force India to come by in the second – a phenomenon repeated between other pairs of drivers. The matter was eventually settled when Di Resta ran wide at turn 11, handing the position to Buemi.

But the Toro Rosso driver’s race didn’t last much longer. For the second Grand Prix in a row his STR6 let him down.

Kamui Kobayashi claimed the final point. Like Di Resta, he started the race on the harder tyres but pitted earlier and had to pick his way through the slower cars – taking both HRTs in a single corner at one point.

Kobayashi’s single point – his first since the German Grand Prix – edges Sauber ahead of Toro Rosso in the battle for seventh in the constructors’ championship.

His Sauber team mate Sergio Perez was 11th ahead of Rubens Barrichello, who climbed his way up from the back row. Behind Vitaly Petrov in 13th was Pastor Maldonado, who fell foul of the stewards twice during the race.

On both occasions it was his driving while passing blue flags that was under question. He served one drive-through penalty for it and was under investigation for holding up Webber as the race ended.

Bruno Senna also picked up a penalty for holding up a car that was lapping him. He finished 16th behind Jaime Alguersuari. The Lotuses, Timo GLock and Vitantonio Liuzzi were the remaining finishers.

Daniel Ricciardo was a late retirement from the race having spent much of it ahead of his team mate.

A joyful Hamilton dedicated his victory to his mother. Despite an often difficult season, he has now won three races, as many as his team mate.

That leaves the way clear for McLaren to end the season in Brazil on a high after a rare moment of weakness by their biggest rivals.