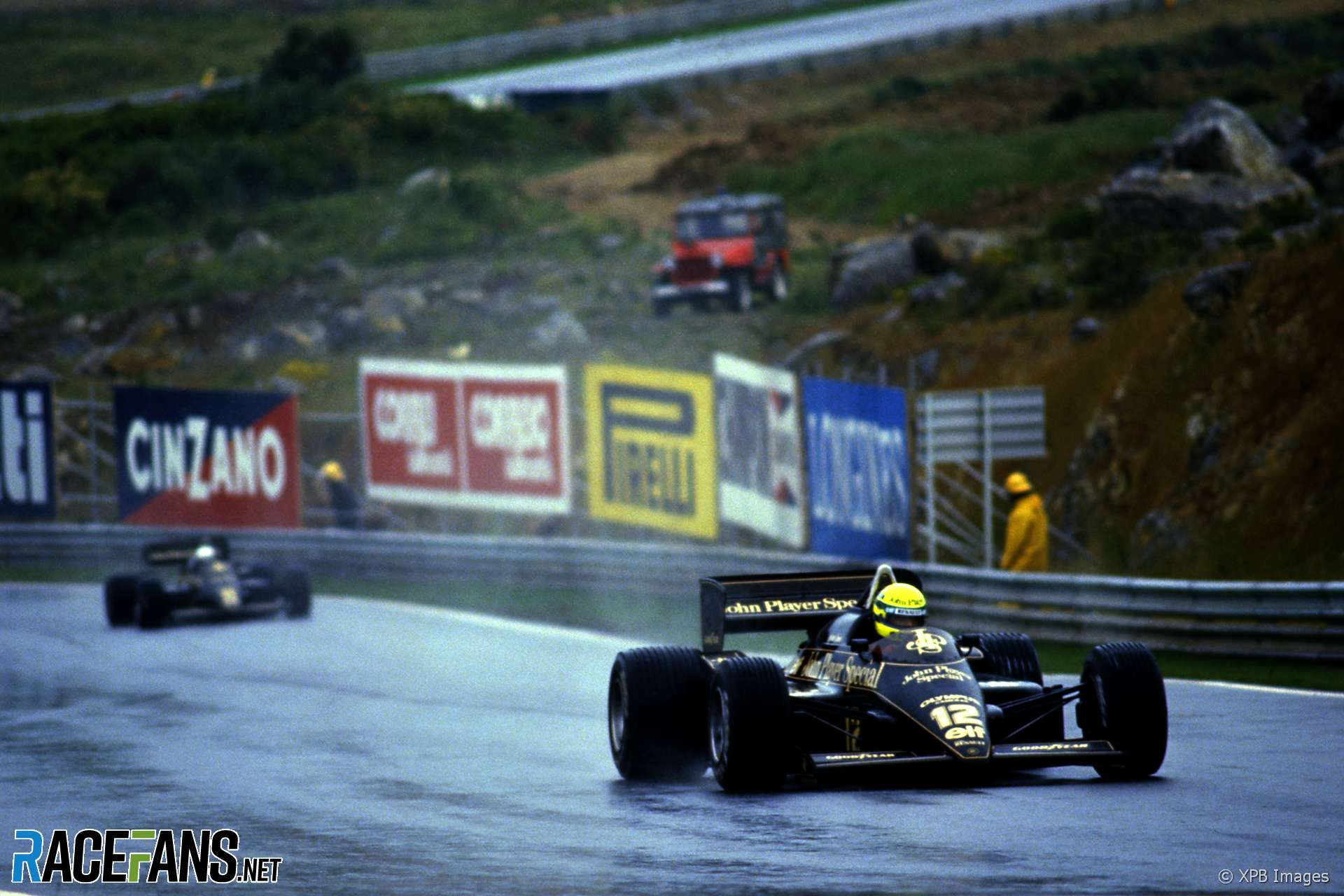 Today is the 25th anniversary of Ayrton Senna’s first win in Formula 1.

Despite atrocious conditions, which F1 cars would not be allowed to race in today, the Brazilian dominated and won by more than a minute.

Senna’ first race for Lotus at home in Brazil ended in retirement with an engine problem.

The fault continued to dog the team when they arrived at Estoril in Portugal for the second round of the championship. Senna had to switch to the spare car during practice until that one stopped with a clutch problem, further hindering his preparations for the race.

He shrugged off these problem to top both qualifying sessions, beating Alain Prost to pole position and out-qualifying team mate Elio de Angelis by 1.1 seconds. It was the first time Senna had ever started a race from pole position – another 64 would soon follow:

*Started from the pit lane

Turmoil at Toleman – and Ferrari

For the second race in a row Toleman were absent from the paddock. The team, which Senna had driven for in 1984, had not been able to find a tyre supplier for the new season.

That left Stefan Johansson and John Watson without drives. Fortunately one had just become available – at Ferrari. Enzo Ferrari had dropped Rene Arnoux just one race into the Frenchman’s third season with the team.

Rumours abounded over whether this was a consequence from Arnoux’s poor performance throughout much of 1984, or something more salacious. The official line – that Arnoux had not fully recovered from leg surgery over the winter – was widely ignored.

Toleman agreed to release Johansson from his contract and Ferrari has its first ever Swedish F1 driver.

As rain began to fall before to race started Brian Hart, who had built engines for Toleman the year before, told anyone who would listen that Senna was going to run away with the race.

Sure enough, Senna led the field away on a damp track. No-one threatened him for the lead in the opening laps and behind him there was chaos.

Keke Rosberg stalled his Williams on the grid and one by one the cars dodged around him. Jonathan Palmer failed to swerve quickly enough and clipped the FW10 with his Zakspeed. Palmer was out with broken suspension, but Rosberg managed to get going and re-join the race.

Ferrari newcomer Stefan Johansson had a baptism of fire. Riccardo Patrese knocked him into a spin just a few laps into the race. Then Johansson spun on his own, damaging his front wing. Later he pitted to have his sticking front-left brake un-jammed.

For some drivers the abject conditions were too much – particularly those on Pirellis. Both Ligier drivers and Nelson Piquet all retired because their Pirelli wet weather tyres were hopelessly uncompetitive. Piquet made half-a-dozen visits to the pits, and even changed into a dry pair of overalls during one of them.

Too wet to race – but they did

As the rain started to fall more heavily, Senna pulled further away from the chasing de Angelis and Prost. Occasionally the McLaren driver moved to pass the Lotus, but de Angelis kept him at bay.

By half-race distance the rain was at its worst, forming deep pools on the track. The drivers struggled to keep their cars under control on the straights. But 25 years ago there were no safety cars and the race carried on – in spite of danger to drivers and marshals that would be completely unacceptable today.

By now Rosberg’s race was over. The lumpy power delivery of his Honda turbo engine caught him out at the Parabolica, his Williams snapped out of control and hit the barrier. The steering wheel spun in his hands, breaking his thumb. The car finally came to a halt at the exit of the fast turn that led the cars onto the main straight.

A team of marshals worked to push the stricken car from the racing line clear. With another car parked up at the inside of the turn from another accident, oncoming drivers had to weave through the wreckage with very poor visibility.

On lap 30, while chasing de Angelis down the main straight, Prost’s McLaren snapped out of control. It spun down the straight and rear-ended the barrier. Prost climbed out of his cockpit and retired.

While this was going on Senna had his hands out of the cockpit, waving at the race organisers and urging them to stop the race because of the atrocious conditions.

This had more than a hint of irony about it – Prost had done the exact same thing at Monaco the year before in similar conditions while Senna was bearing down on him. On that occasions the organisers took a controversial decision to stop the race and thereby hand victory to Prost.

This time the race kept going. But still Senna pulled away inexorably, drawing further ahead of the chasing pack with every lap.

Senna’s drive was relentless. Only in the closing stages did he ease up the pace, by which time he had lapped almost everybody. De Angelis wasn’t able to make it a one-two for the team – he was passed by Michele Alboreto and Patrick Tambay and finished fourth.

Nigel Mansell took fifth after an eventful race. Like Rosberg, he’d been caught out by the Honda’s power delivery, hitting a barrier on his way to the grid. This was his second crash of the weekend having been hit by Eddie Cheever in a bizarre incident during practice.

He had to start from the pit lane after repairs to his car, but battled through the field to take two points for fifth place. He was busy fighting off Stefan Bellof’s Tyrrell as they crossed the line, and lost control of his car on the straight, hitting the barriers once again.

Fortunately he missed the crowd of Lotus mechanics who had broken onto the track to celebrate with Senna while cars charged past in plumes of spray.

His maiden victory could not have been more emphatic. He took pole position, set fastest lap, led every lap and won the race. Alboreto was the only other driver to complete the race distance of 67 laps – shortened from 70 under the two-hour time limit – and even Mansell in fifth place was two laps behind.

While commentators rushed to heap praise on Senna, the man himself insisted it had not been a perfect drive. But years later he described it as being more special than even one of his most celebrated victories:

The big danger was that the conditions changed all the time. Sometimes the rain was very heavy, sometimes not.

I couldn’t see anything behind me. It was difficult even to keep the car in a straight line sometimes, and for sure the race should have been stopped.

Once I nearly spun in front of the pits, like Prost, and I was lucky to stay on the road. People think I made no mistakes but that’s not true – I’ve no idea how many times I went off! Once I had all four wheels on the grass, totally out of control, but the car came back onto the circuit.

People later said that my win in the wet at Donington in ’93 was my greatest performance. No way! I had traction control OK, I didn’t make any real mistakes, but the car was so much easier to drive. It was a good win, sure, but compared with Estoril ’85 it was nothing, really.
Ayrton Senna

Did you see this race?

Were you at the 1985 Portuguese Grand Prix? Did you watch it live? If so, please tell us about it in the comments.