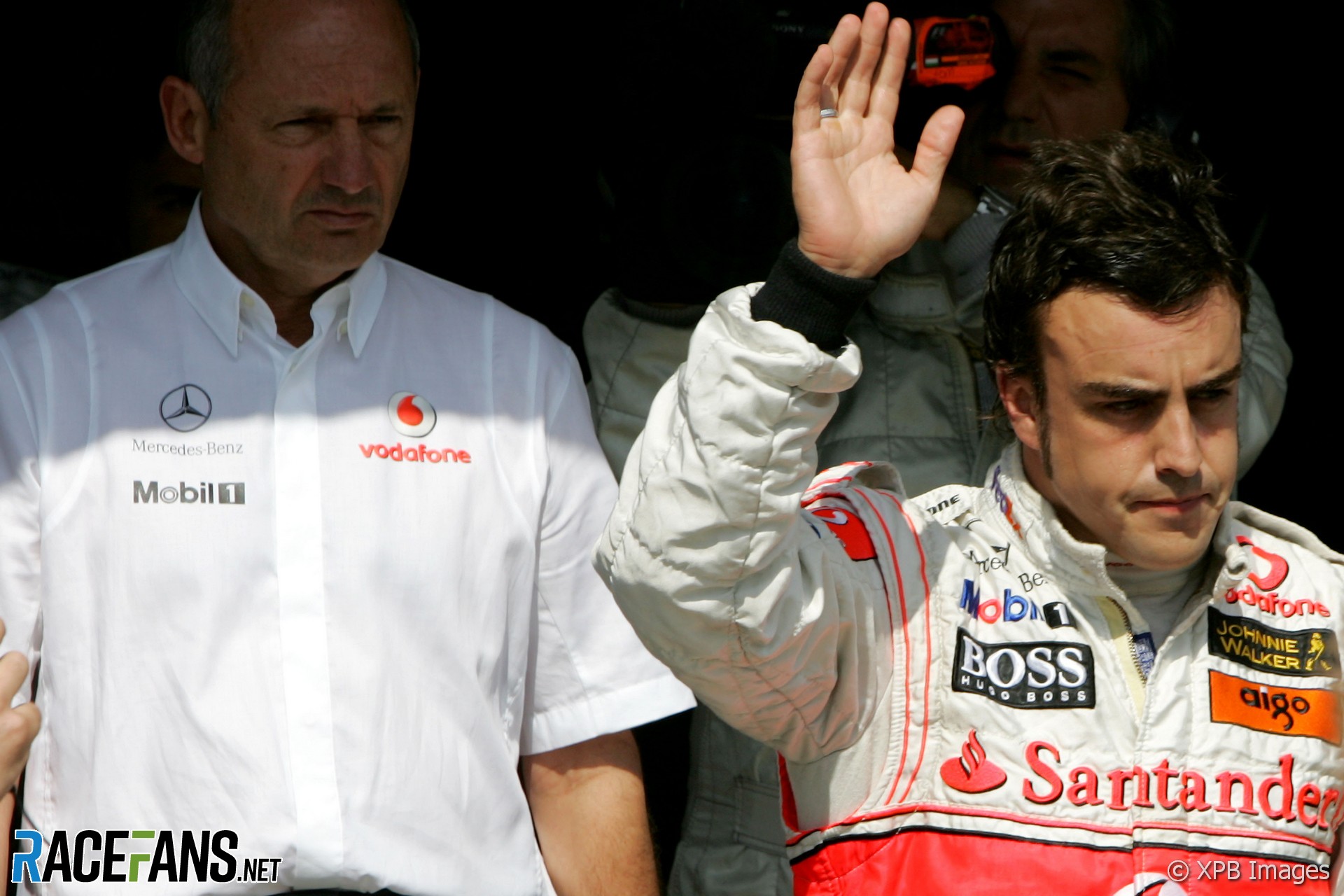 The 2007 Hungarian Grand Prix was the turning point of last year’s season.

This was the moment when the fraught relations between Fernando Alonso and Lewis Hamilton at McLaren went into meltdown. Harsh words between Alonso and Ron Dennis brought new evidence to the eyes of the FIA which would lead to McLaren’s expulsion from the constructors’ championship – and Alonso’s departure from the team.

Here’s a look back at how McLaren’s disaster unfolded with each original article from this site from that weekend and more information that has come to light since.

Hungarian GP 2007 qualifying: Alonso’s tainted triumph – Immediately after qualifying little was known about what had happened at McLaren. But it was plain for all to see that Alonso had blocked his team mate in the pits, preventing him from completing his final run in qualifying.

Video: Alonso blocks Hamilton in pits during qualifying – The video footage of what happened.

Alonso’s qualifying stunt: 21 opinions – While the stewards summoned McLaren and dwelled on the incident debates raged.

Dennis says Alonso not to blame – Finally solid details about what had happened began to emerge. Ron Dennis told the world the problem began with Hamilton failing to let Alonso past earlier in the session. He also said McLaren had held Alonso in the pits intentionally. But did that include the ten seconds where Alonso was stationary after the lollipop had been lifted?

Alonso & McLaren punished by stewards – The stewards didn’t believe McLaren’s explanation about the lollipop. Alonso got a five place grid penalty and McLaren were told they would not score constructors’ championship points that weekend.

The stewards’ full verdict on McLaren and Alonso – Alonso’s claim he spent the final 10 seconds in conversation with his engineer were met with scepticism.

Another PR disaster for McLaren – Meanwhile two newspapers were claiming they had dialogue of a furious, expletive-ridden exchange between Hamilton and Dennis at the end of qualifying.

Any sympathy for McLaren? – Thoughts on how McLaren’s efforts to treat their drivers equally had backfired.

British tabloids blame Alonso – Reportage from one section of the British press was predictably one-sided. As far as the tabloids were concerned, Hamilton had done nothing wrong.

Ron Dennis revealed evidence against McLaren to FIA – After the verdict against McLaren in the ‘spygate’ case was announced it became clear that the Hungarian Grand Prix weekend had played a significant role.

Alonso and de la Rosa’s emails led to McLaren’s punishment – According to Dennis, Alonso threatened to make the contents of several compromising emails in his possession available to the FIA. Alonso has denied this version of events but not yet offered his side of the story.

Was Dennis to blame in McLaren’s Hungary row? – A long time after the events a report in The Times claimed to have the real details of what was actually said between Hamilton and Dennis on the radio. It quoted Dennis saying, “That’s what happens when you don’t [expletive] do what you’re told.”

Perhaps this weekend, one year on from the events of 2007, fresh details may come to light to explain this confusing, disputed, and highly controversial episode.

22 comments on “Meltdown at McLaren: The whole story of Hungary 2007”