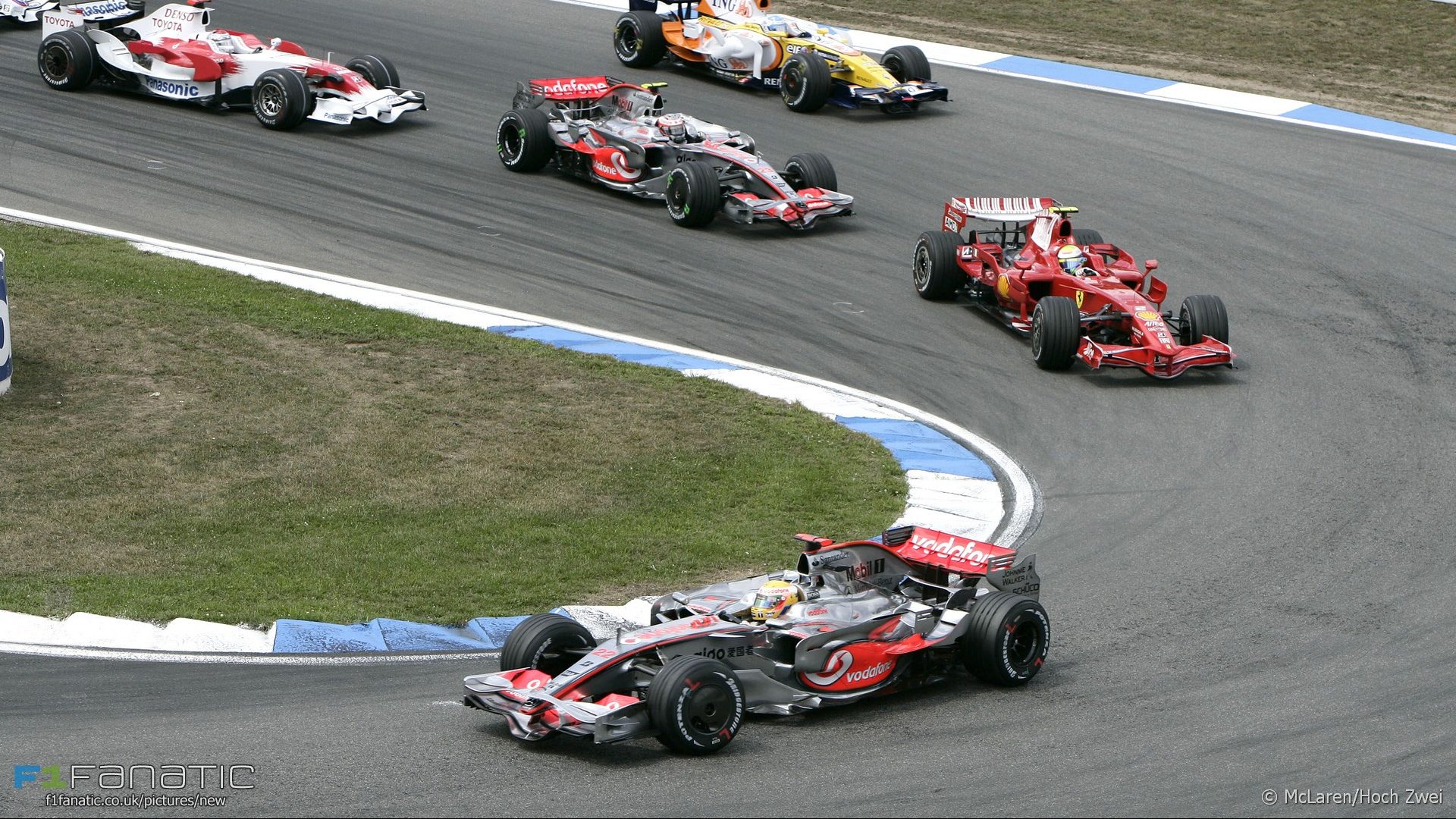 Lewis Hamilton was dominating the German Grand Prix until a safety car appearance threw his race into disarray.

His McLaren team made a clear mistake by failing to bring him into the pits – leaving him to fight his way back to the front of the field the hard way.

After taking his delayed stop Hamilton hunted down and passed first Felipe Massa then surprise leader Nelson Piquet Jnr in the closing stages for another memorable victory.

From pole position Hamilton shot into an early lead – pulling out 1.8s over Massa in the first lap alone. Massa had spent the first few corners fending off the attention of Heikki Kovalainen, who had a run at the Ferrari into the Spitzkerve hairpin but backed off.

Robert Kubica made an exceptional start from seventh to take fourth. He passed Kimi Raikkonen off the start line and took advantage of Jarno Trulli and Fernando Alonso racing each other to pass the pair of them.

David Coulthard made a poor start from tenth, however, plunging down the order to 15th.

There was no stopping Hamilton in the early stages as he quickly stretched his lead over Massa. By lap four he had a 3.7s lead, seven seconds by lap ten, and 11 by lap 18.

Kovalainen was not able to lap anything like as quickly, and actually fell to 4.3s behind Massa on lap eight.

Raikkonen made some progress on lap three when Alonso tried a very optimistic pass on Trulli at turn one. Trulli brushed Alonso aside and the Renault driver lost momentum, allowing Raikkonen through with ease. But Raikkonen could do nothing about Trulli.

In an effort to get on terms with Hamilton, Ferrari switched Massa onto the softer compound tyres at his first stop. Hamilton had come in on lap 18 and Massa followed two laps later. Massa’s brief period in the lead allowed him to take a couple of seconds out of Hamilton, and he was further helped by Hamilton getting stuck behind Trulli on his out-lap, before the Toyota pitted.

Kovalainen came in on lap 21 and resumed right in front of Nick Heidfeld. The BMW had fuelled heavily after qualifying outside the top ten.

Raikkonen’s pit stop enabled him to leap ahead of Trulli and he now found himself fifth behind Kubica.

But Massa’s switch onto softer tyres didn’t help his race pace and Hamilton was quickly able to extend his lead again. By lap 30 it was back up to 11s with Kovalainen, third, chipping away at Massa’s 7.2s advantage.

By now some of the drivers who had started outside the top ten were making their first stops. Timo Glock briefly ran third before pitting on lap 30. Kazuki Nakajima, who had spun on lap 17, came in at the same time.

The last two drivers to pit were Rubens Barrichello on lap 32 and Nelson Piquet Jnr on lap 36. It proved to be perfect timing for Piquet.

Just as the German Grand Prix was starting to look settled it took a sudden and dramatic twist. While Piquet was making his final stop Glock’s race came to an end in the barrier on the pit straight. Coming out of the final corner his right rear suspension seemed to give way, and Glock was a passenger as his car spun backwards into the pit wall (video).

Glock escaped injury in the crash but the safety car was summoned while the debris was cleared up. With only 24 laps until the finish anyone who still needed to pit could do so under the safety car and make it to the end of the race.

Yet bafflingly McLaren chose not to pit Hamilton. Afterwards Ron Dennis admitted they underestimated how long the safety car would stay out for, as the field reorganised itself while lapped cars got their places back. But even so it was a completely unnecessary gamble.

Practically everyone else pitted, with Raikkonen falling to 12th as he had to queue behind Massa, and Kubica getting ahead of Kovalainen. Sebastian Vettel came out of his pit box alongside Alonso, forcing the Renault driver to cross the white line at the exit of the pit lane, although he did not incur a penalty.

When the race resumced on lap 42 Hamilton had eight laps to build as large a gap as possible. Behind him were Heidfeld, Piquet Jnr and Massa. As the safety car headed for the pits Mark Webber came to a smoky stop, pulling up with a broken oil cooler after debris had gotten into his car.

Kovalainen went straight for Kubica on the restart, drawing along the outside of the BMW at the left-hander in front of the Mercedes grandstand. He hung on around the outside of the corner and took advantage as the track bent to the right, seizing the position.

Alonso and Vettel’s battle went on and as Alonso tried to pass the Toro Rosso driver Raikkonen was able to take advantage on lap 43 and Nico Rosberg also passed the Renault. Raikkonen then made rapid progress, passing Vettel on the next lap and Trulli on the lap after that.

Meanwhile Hamilton had pulled out 15.7 seconds over Massa before his final pit stop on lap 50. He came out fifth, behind Heidfeld (still to pit), Piquet Jnr, Massa and Kovalainen.

Kovalainen wasted no time in letting his team mate past. Hamilton quickly went by – and Heidfeld shortly emerged from the pits behind Hamilton, showing the McLaren driver would have had an even tougher time had he not passed his team mate so quickly.

But when Hamilton caught Massa on lap 57 the Ferrari driver hardly made it any harder for Hamilton than Kovalainen had. Hamilton tucked into Massa’s slipstream on the run towards to Spitzkerve and must hardly have believed his luck when Massa took his usual racing line, allowing him to pass down the inside with ease. Massa tried to fight back at the next bend but Hamilton defended his position and left him behind.

Piquet Jnr was next in Hamilton’s sights and on lap 59 he was dispensed with too, having put up no more resistance than Massa had, but not really having a car to fend Hamilton off with anyway.

Second place was extremely useful for Piquet Jnr and Renault, as it moves the latter ahead of Williams in the constructors’ championship. Massa took third ahead of Heidfeld and Kovalainen.

Raikkonen started where he finished – sixth – with Kubica seventh and Vettel scoring a point in his home race.

But after the double whammy of this battling win at Hockenheim, and his dominating drive in the wet at Silverstone, Hamilton must be feeling invincible. He heads to the Hungaroring with a narrow four-point advantage over Massa, and the comforting knowledge that his MP4/23 is now the car to beat.

*Received a 25-second penalty for unlapping himself when he was not allowed to, demoting him from 14th to 17th.